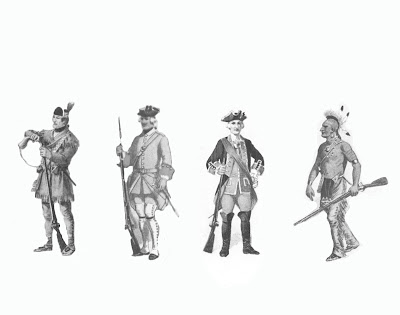 We are busy here in the Archaeology Section of The State Museum of Pennsylvania preparing for our upcoming exhibit at the Pennsylvania Farm Show on the archaeology of the French & Indian War in Pennsylvania.  We recently conducted a day-long program focusing on archaeological excavations conducted at many of these sites throughout the commonwealth.  It seems appropriate at this time of giving thanks, for us to think about the struggles of this decisive period in the history of our state and for that matter our nation. As we go about our own preparations for Thanksgiving celebrations with family and friends, let us take a moment to reflect on the diet of these frontier soldiers.

The French & Indian War is also identified  as the Seven Years War as defined by the years from 1756-1763 when Great Britain was officially engaged in a war with France. Pennsylvania’s role in this conflict had begun much earlier as the result of western expansion by traders into the Ohio Valley. France wished to maintain control of the waterways from Canada to Louisiana and began to construct a serious of defensive forts in 1753 from Lake Erie to present day Pittsburgh, taking control of the Ohio Valley.   The British government was unsuccessful in attempts to defeat the French and take back control of the region, which eventually led to the declaration of war. 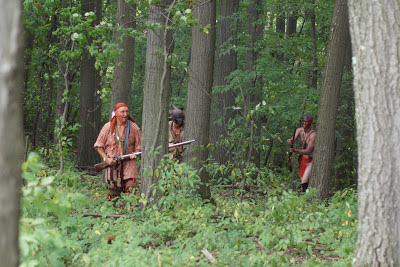 The Pennsylvania’s Provincial government had previously resisted requests to establish forts or block-houses in order to protect the fur trade and had distanced itself from the conflicts of the Ohio Valley. The defeat of General Braddock in 1755 by French and Indian forces and the subsequent retreat of the Virginia militia into Maryland and Virginia left Pennsylvania with little protection.   The pacifist Quaker Assembly had resisted establishing a militia or providing funds for military action, but the defeat of Braddock and increased Indian attacks, led Benjamin Franklin’s volunteer militia to successfully push for both a Militia Act and a Military Supply Act which passed in November 1755.

Historic records of the period document the daily provisions designated for distribution to the soldiers, but supplies often did not keep up with the demand. The weekly allowance of provisions for each man were as follows; beef-3lbs, pork-3lbs, fish 1-lb, bread or meal 10 ½ lbs., and one Gill (4 ounces) of rum per day.  Despite the passing of these acts, foods and supplies were difficult to secure in part due to poor transportation routes, which often lead to food spoiling.

A letter from Lieutenant Robert Callender at Carlisle to Governor Denny in November 1756 provides insight as to the hardships of the common soldier, “The men are allowed only one pound of beef per day, which is a ½ pound less than their former allowance, wherewith they are very much dissatisfied, & the more so, because the most of the beef cattle which the victuallers (merchants) buy here are very young & small, & cannot be call’d beef such is commonly bought for the use of soldiers. They also weigh off to the troops all the necks, houghs & shins of this ordinary stuff...” The pork was salt cured and packed in barrels which would often arrive rotten.  The lack of fresh foods in the diet attributed to scurvy as described by Major Burd: “their teeth ready to drop out of their mouths and their flesh as black as coal.” Burd wrote of conditions at Fort Augusta in the winter of 1756/1757 upon his arrival and of his efforts to raise the food stuffs off the ground and onto a loft to keep the flour dry.  The food supplies spoiled and the Susquehanna River froze preventing the arrival of new shipments. 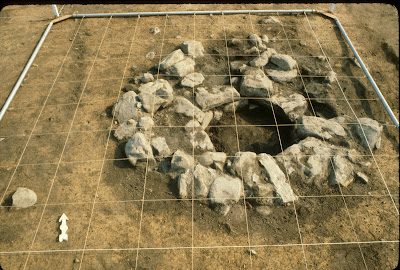 the well at Fort Loudoun

Archaeology conducted at French & Indian War period sites has provided tangible evidence of the diet of these frontier soldiers.  Faunal analysis by Dr. Gary Webster of remains recovered from excavating the well at Fort Loudoun in Franklin County provides the following graph. 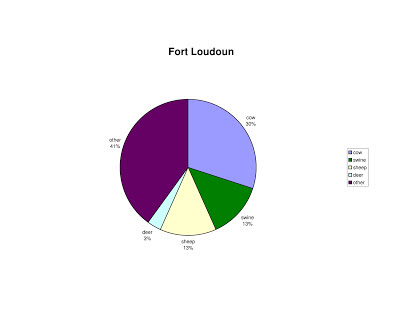 Webster noted evidence of butchering of cows with heavy axes and the use of every part, including feet for the marrow.  Beef marrow is high in fat and was consumed by the soldiers. Also present were sheep and pig remains, although there was no evidence of heavy axe butchering in these bones.  Webster provided this assessment of animal ages; most of the cows, 65% were mature animals at least 4 years of age. Sheep and pig remains were younger at 2 to 3 years old.   Webster observed that analysis of remains recovered from Fort Ligonier and analyzed by Guilday (1970) were much older and in generally poorer condition than those at Fort Loudoun.
Fort Ligonier was built in 1758 in Westmoreland County.  A larger fort than Fort Loudoun, its western location introduced additional challenges in herding sheep, beef and hogs across rough trails without sufficient forage. The presence of a greater percentage of deer at Fort Ligonier is of note. Colonel Bouquet, who was in command at this time, permitted hunting by individual soldiers, which provided an occasional supplement to the routine of sheep, cow and pig.  Soldiers were paid for the deerskins collected as they could be used to make moccasins. 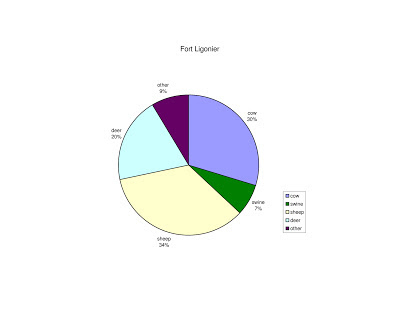 Recent faunal analysis by Franklin and Marshall undergraduate Claire Dalton on remains recovered at Fort Hunter during the 2007 excavation season produced similar dietary evidence as the two other forts.  Fort Hunter is the smallest of these three forts in comparison, but the provisions supplied appear consistent with those at Ligonier and Loudoun. 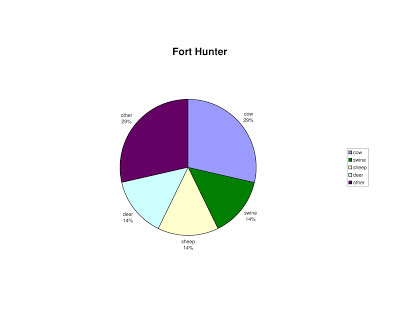 The percentage of cow remains present at all three forts is nearly identical at 29 and 30 percent.  Sheep remains account for a greater percentage at Fort Ligonier and may again be an indicator of a difference in the food supply on the Forbes expedition into the Ohio Valley.

On all three charts a category of “other” is present.  Included in this category are birds of which wild turkey were noted as present at both Fort Loudoun and Fort Ligonier, if only in minuscule amounts. Again, hunting was often dangerous and at times forbidden due to Indian attacks in the woods surrounding these forts.
The French & Indian War officially ended with the signing of the Treaty of Paris in 1763, but the same struggle for control of lands and trade continued to plague settlement in the commonwealth for several more years.  The displacement of Native Americans and our western expansion into the Ohio Valley forever changed Penn’s Woods and set the stage for Pennsylvania’s role in the Revolutionary War.
We hope you have enjoyed this glimpse into our past and you will be inspired to learn about the role of the frontier soldier in your community. Enjoy your Thanksgiving feast, but consider the hardships endured by these colonial soldiers 250 years ago.  We also hope that you will visit us at our exhibit at the Pennsylvania Farm Show in January to learn more about this important period in our past.

Webster, Gary
An Analysis of Faunal Materials from the Well at Fort Loudoun, Penna.  unpublished manuscript on file at The State Museum of Pennsylvanian's Section of Archaeology