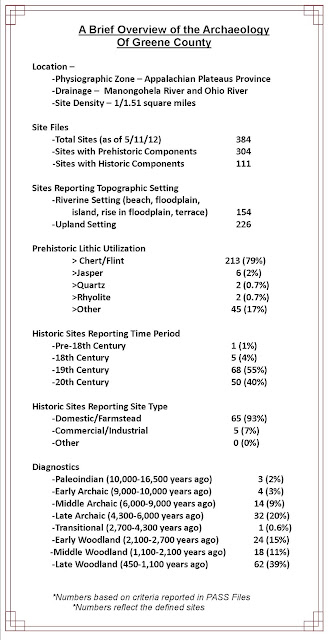 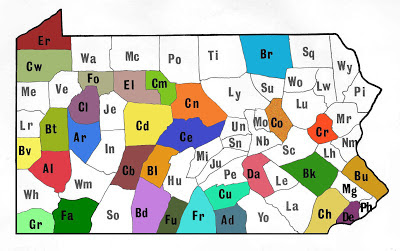 
This week we return to our county tour of archaeological sites by featuring Greene County which is located in the extreme southwestern corner of Pennsylvania. It covers 576 square miles of rolling hills and narrow valleys. Greene County is on the north by Washington County, on the east by the Monongahela River and Fayette County and on the south and west by the state of West Virginia. The primary drainage is the Monongahela with Ten Mile Creek as the county’s largest watershed. With the exception of Wheeling Creek which drains the extreme western part of the county directly into the Ohio River in West Virginia’s western Panhandle, the two branches of Ten Mile Creek drain into the Monongahela at Fredericktown, Pennsylvania. Many of the recorded archaeological sites, from Paleoindian through the Late Prehistoric period in the county are associated with these drainages.

The physiographic region, classified as the Waynesburg Hills Section, is made up of Permian Period sediments 250-290 million years old and it is those rocks that are the localized remnants of the sea bedded sediments of long ago. Near the Monongahela River these fossilized deposits are underlain by later period Quaternary sand and cobble strands, some of which are secondary glacially derived material easily traced along the road cuts of Route 88 and other locations that parallel the high river bluffs.

A rather good quality tabular greenish gray stone, Ten Mile Chert, found near Ryerson State Park was the principal lithic material of choice used by local prehistoric Native Americans for stone tool and weapon production. Other siliceous lithics that have been identified and used by prehistoric people in this region of southwestern Pennsylvania include Loyalhanna, Uniontown, Sewickley and dull to semi-vitreous dark gray to black Brush Creek chert that comes from the base of Chestnut Ridge east of Uniontown, Pennsylvania.

The principal Indian Paths in Greene County were the Catfish Path and the Warriors Branch which cross each other near Spraggs, a tiny village south of Waynesburg, Pennsylvania. Segments of the Mingo Path and the Catawba Path also ran through other sections of eastern Greene County. Curiously, it was precisely along these pathways that some of the major Monongahela villages were situated. And it is noteworthy that many of the archaeological sites in the county are the villages associated with this Native American culture whose occupations date to the Late Prehistoric period (1200-1650 AD.).


﻿﻿Reconnaissance surveys in 1981 in the Waynesburg area were undertaken to identify potential archaeological sites along the Bailey Mine Railroad corridor for Consolidation Coal Company, Pittsburgh. This was done as part of the compliance procedure under Section 106 of the Federal National Historic Preservation Act of 1966 and other pertinent laws covering cultural resources. These surveys were accomplished as part of a normal environmental assessment of the rail line project. In the course of this survey prehistoric archaeological sites were identified and several of these were mitigated through a Phase III data recovery program. One of these, the Throckmorton Site (36GR160) provides information on a curious structural feature of the Monongahela Culture called a petal- structure. This, and a second nearly identical structure discovered in 1983 at the Foley Farm Site west of Waynesburg, is discussed below.
﻿ ﻿
In the greater context, Monongahela village sites are typically characterized by prehistoric habitations that were well fortified with wooden palisades. Houses were simple wigwam shaped affairs no more than 15-25 feet in diameter. Houses and the palisade walls were made with sapling posts cut from the nearby forest. Later on, beginning in the mid-late 16th century, a most unusually shaped building was placed inside some of the Monongahela villages of Westmoreland and Greene counties. Archaeologists have named these buildings, petal-structures – from the multiple appendages found associated with the building. The function or functions of these bewildering structures is speculative in that they may have served in the storage of dry foods, a super-sized granary, of sorts or they may have had a communal use as sweathouses as the need for such activities arose within the village.


Two petal- structures have been archaeologically researched in Greene County. One was discovered on the Throckmorton Site northwest of Waynesburg along Browns Creek -the other, Foley Farm Site, on a tributary of Wheeling Creek in the extreme western part of the county. The petal structures from these sites were of similar size measuring approximately 35-40 feet in diameter although in contrast, two other petal structures, perhaps made and used during an earlier period of Monongahela settlement east of the Monongahela River are of a slightly smaller size but, otherwise, were quite similar in architecture.

Careful examination of petal-structures shows that they were part of the village ring of houses. Both Throckmorton and Foley Farm structures were built on the east side where entry into the settlement was made. Another interesting observation is that the Foley Farm petal-structure was rebuilt at least once with some of its petal-shaped features rebuilt more than once. Interior features for both petal-structures, Throckmorton and Foley Farm, consisted of a central hearth of burned and reddened soil made that way by repeated fire building. One or more small oval-shaped pits and several lines of postmolds were also identified. The postmolds appear to have formed wall supports for interior benches.

Artifacts gleaned from the archaeology conducted at the Throckmorton and Foley Farm sites (European trade items) reveal to us that these sites were short lived and disappeared into obscurity during the first quarter of the 17th century. They were the last of the native Monongahelans to have lived among the hills and valleys of Greene County. What, specifically, was the reason for their disappearance? The possibilities may be manifold. Some archaeologist have speculated that they were dispersed by the northern Iroquoians, specifically, the Seneca who were carrying out raids into the Ohio country in the early 17th century. Others postulate disease brought inland by middlemen trading from coastal regions to the east, especially up the Potomac and through the Cheat River valley. Whatever the case, the Monongahelans, like many other contemporary Native American societies of the period, ceased to exist.


Thank you to our followers who came out last Saturday, November 3rd, for the Workshops in Archaeology.  Everyone enjoyed this day long program focused on the archaeology of the French & Indian War in Pennsylvania.  Look for an exhibit in January at the Pennsylvania State Farm Show, along with a new brochure, continuing with this theme. The signing of the Treaty of Paris and the Battle of Bushy Run in 1763, are important events that mark the end of this conflict nearly two-hundred and fifty years ago.

Posted by PA Archaeology at 4:33 PM