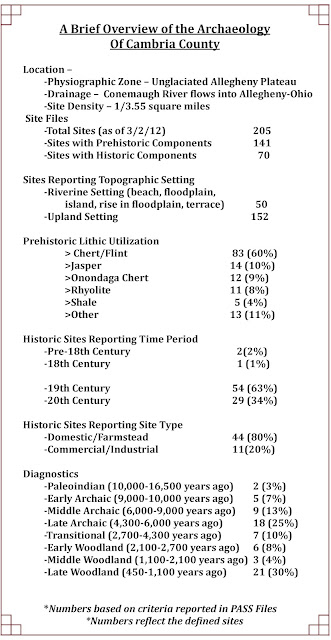 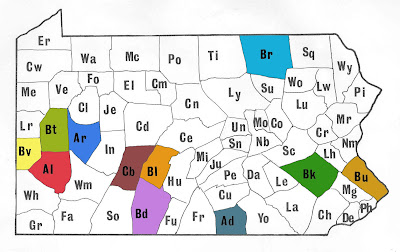 Cambria County is located to the southwest of the center of the state and is a relatively small county in size at 696 square miles. Located in the Appalachian Plateau, narrow ridges and valleys comprise the rugged terrain of the area. Flat topped-hills and flood plains provided resources for prehistoric occupations. Pennsylvania-age bedrock formations may have supplied Native Americans with chert and clay resources for making tools and pottery. Shale, siltstone, sandstone, thin bedded marine limestone, and coal beds that underlie the plateaus and ridges of the region contributed to Cambria’s industrial development.


Evidence of prehistoric peoples in Cambria County was recorded by Dr. Verna Cowin of the Carnegie Museum, Regional Archaeologist, while conducting a survey for the Pennsylvania Historical & Museum Commission in 1982. Dr. Cowin recorded a Paleoindian (11,000-10,000 years ago) fluted point from 36Cb117. Archaic hunters and gatherers hunted elk, white tail deer, muskrat, black bear, wild turkey and rabbits in this region and fashioned stone tools from a variety of cherts found in the region. Native peoples continued to occupy this area through the Late Woodland period (1000 to 400 years ago). The archaeological evidence of these native occupations is sparse and can be attributed in part to the man- made and natural destruction.

Coal mining which boomed during the 1850s and 1860s contributed to changing landscape of this county. The Cambria Iron Company was a successful steel rail business and that, combined with lumbering, contributed to the expanded development along river banks in these deep valleys. Lumbering practices of the late 1800’s had a significant impact on the landscape due to erosion as a result of clear cutting and the construction of lumbering related facilities. Lumbering brought dams, mills and railroads- all of which altered the landscape and destroyed archaeological evidence of Late Woodland village sites. 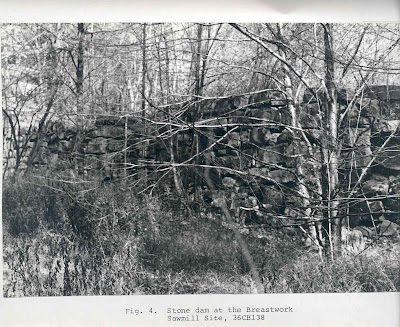 During the Contact period, James LeTort reported as early as 1731 Native villages throughout the southwestern region of the state and identified Indian paths which crisscross the area. Multiple foot paths run thru Cambria County connecting it to surrounding counties and resources. These paths include the Frankstown Path, West and the Conemaugh Path, the later named for the river which flows through Cambria County. In 1764 Thomas Hutchins, a lieutenant in Forbes’ Army surveyed the Kiskeminetas and Conemaugh Rivers and their branches, identifying five Indian towns in the area. Variations provided for the spelling of the Delaware and Shawnee village located on the Conemaugh River are Connumach Old Town, Conemach Old Town, and Conemough Old Town. 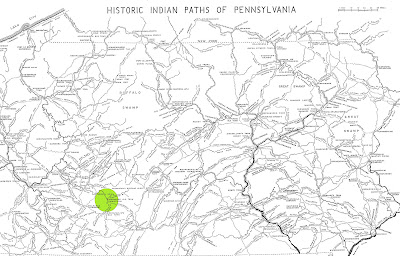 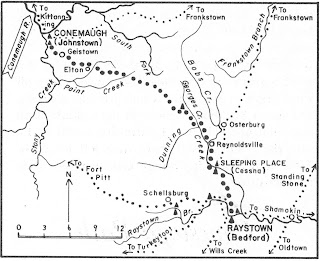 According to the Pennsylvania Archaeological Site Survey Files (PASS) the site was recorded in 1975 as 36CB0019, but was destroyed by industrial and private development. The location of Conemaugh Old Town is in the city of Johnstown, the site of multiple floods including the famous flood of 1889 .

The Johnstown flood occurred in May of 1889 when heavy rains had caused streams including the Little Conemaugh to overspill their banks. The South Fork Fishing and Hunting Club was located fourteen miles north of Johnstown and was a private club whose members included many wealthy industrialists of the period. The club maintained a dam which had been constructed as part of the Pennsylvania Canal system to provide water between Johnstown and Pittsburgh. It was never intended for recreational use, but modifications by the club and poor maintenance created a disastrous event that marred this region for decades. Over two thousand citizens lost their lives and four square miles of the city of Johnstown was destroyed. The American Red Cross responded with aid, the first major relief act during peacetime. None of the lawsuits brought against members of the South Fork Fishing and Hunting Club were successful and no one took responsibility for the disaster.

This concludes our tour of Cambria County, next week we are taking a break from our county tour to highlight the upcoming annual meeting of the Society for Pennsylvania Archaeology which will be held in April 13-15 in Clarion.

We hope that these glimpses into the archaeology of our Commonwealth will inspire you to take an interest in your local archaeological legacy. These resources are Pennsylvania’s heritage and for all of us it is our window into the past. Help us to protect and preserve these archaeological resources which are crucial to our understanding of the past.

For more information, visit PAarchaeology.state.pa.us or the Hall of Anthropology and Archaeology at The State Museum of Pennsylvania .
Posted by PA Archaeology at 1:45 PM