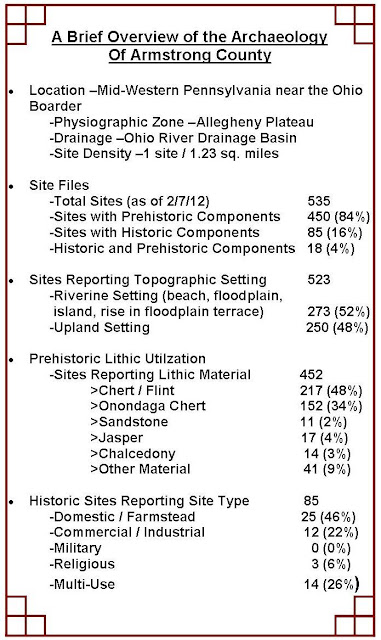 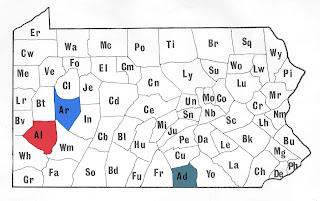 This week we travel up the river from Allegheny County to Armstrong County. This County is located on the edge of the Unglaciated Appalachian Plateau and is drained by the Allegheny River, Crooked Creek and Redbank Creek. There are 535 sites recorded in the Pennsylvania Archaeological Site Survey files and they include sites from Paleoindian through the 19th century. It is a rural county and over 87% of the sites have a prehistoric component. The Brown Site (36Ar188) reported by George and Davis (Pennsylvania Archaeologist 1986 56(1-2)12-20) is one of the few stratified Early and Middle Archaic stratified floodplain sites in the Allegheny valley. The historic sites are mostly 19th century but the Woodward domestic site (36Ar469) dates to the early 18th century. The prehistoric sites include several Late Woodland villages, 62 rockshelters and two petroglyphs. The Wadding Rockshelter site (36Ar21), reported by George and Bassinger (Pennsylvania Archaeologist 1975 45(4)1-21), was another stratified site that was important in determining the cultural sequence in the region.

The major excavation in the county was conducted by Kenneth Burkett (Field Associate, Carnegie Museum) at the Fishbasket site (36Ar134) along Redbank creek on the border with Clarion County. Ken also excavated the Fishbasket North site (36Cl91) located directly across the creek in Clarion County. Both of these sites were multiyear projects. Ken, his wife Cheryl and a group of loyal volunteers excavated these sites by hand, without the benefit of machinery over a period of 20 years. The excavations were highly controlled and they are to be lauded for their fine work. A complete issue of the Pennsylvania Archaeologist, (Volume 69(1)) was devoted to his research. 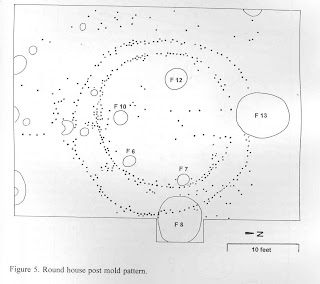 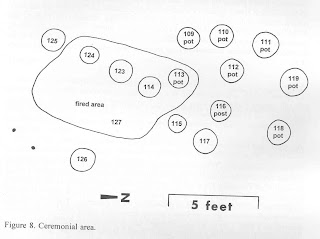 The Fishbasket site consisted of a circular stockade approximately 170 feet in diameter. Twelve houses, measuring ten to twenty-eight feet in diameter were mostly found within ten feet of the stockade line. Others seemed to be randomly scattered throughout the village and these may relate to other occupations. Typically, each house contained a shallow basin –shaped fire pit, a large basin-shaped pit and at least one bell-shaped storage pit. There were 29 free standing, post enclosed storage structures. These are represented by shallow stains, three to four feet in diameter, one to four inches deep, flat bottomed with a line of posts around the edges. A cluster of these were associated with the largest house on the site. This structure was 28 feet in diameter and seems to have been built (or re-built) over a previous house that was 20 feet in diameter. Three houses have attached storage structures. Other storage structures include straight walled, cylindrical storage pits averaging over three feet in diameter and about 20 inches deep. The bottoms of these structures were frequently lined with a thick matting of grass. The frequency of these different storage features suggests a dependence on maize agriculture.

The site is multi-component, dating from Early Archaic times and also includes an 18th or 19th century cabin. Artifacts recovered from features associated with the village include over 90 triangular arrow points, knives, drills/perforators, bifacial abraders/strike-a-lights, a spokeshave, stone pendants, celts, a netsinker, and a ground stone bead. The pottery was plain or cordmarked with castellations, lugs and strap handle appendages, and decorative appliqués of incising and puntations. 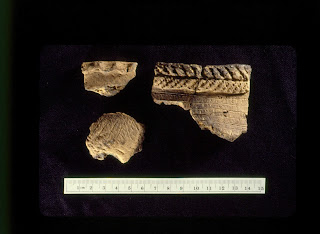 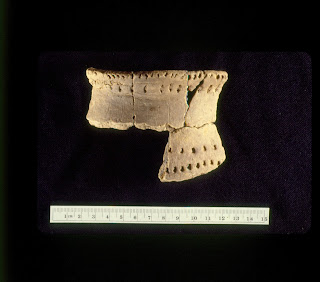 One of the more interesting features of the site was an amorphous burned area located in the center of the plaza. This is associated with 14 shallow basin-shaped pits and a large central post hole 16 inches in diameter. Of the basin shaped pits, seven contain plow damaged pots, six of which were lying on their sides and the mouths were facing the central post. Each of the pots was of a similar size, limestone tempered but representing a “different stylistic and decorative motif”. The meaning of this is not clear but Ken Burkett identifies this as a ceremonial area and that evaluation certainly seems warranted.

The Fishbasket North site located across the Redbank creek was slightly larger but otherwise very similar to the Fishbasket site in the shape of the houses, pottery types and with a central ceremonial area. Based on four radiometric dates, this site dates to 1055 AD. Both sites are similar to the Kimmel Mine sites (36Ar121 and 36Ar221) in terms of pottery and feature types. Further to the south, early Monongahela sites share pottery characteristics and village community patterning. Clearly they are related to this regional manifestation but there also seems to be other similarities to pottery of the West Branch of the Susquehanna River.

Ken Burkett notes that all four sites are located adjacent to major fords in the river and along recorded Indian paths. Based on a very distinctive ground stone bead, Ken believes these sites were located along Frankstown/Vanango path, and he links the Fishbasket site to sites in Southcentral Pennsylvania.

The above summary is presented as another example of Late Woodland village types and Late Woodland adaptations in the Commonwealth. It is interesting that people were living in villages and dependant on maize agriculture in the Middle Allegheny valley before a similar adaptation appeared in the Susquehanna and Delaware valleys.

We hope you’ve enjoyed this glimpse into the archaeology of Armstrong County and that it inspires you to learn more about the archaeology of your county. These resources are Pennsylvania’s heritage and for all of us it is our window into the past. Please help us preservethese important resources by reporting and recording your archaeological finds while we all Preserve our Past for the Future.

For more information, visit PAarchaeology.state.pa.us or the Hall of Anthropology and Archaeology at The State Museum of Pennsylvania .
Posted by PA Archaeology at 3:19 PM