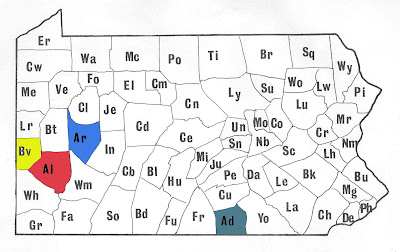 Continuing with our archaeological tour by county, we stay in western Pennsylvania and visit Beaver County this week. Located on the border of Pennsylvania, Ohio and West Virginia, a stream by this name runs through the county before entering the larger Ohio River. French traders translated the Delaware name Amockwi as Beaver stream or river, so named for the abundance of beaver in the area. Research of historic documentation identified four 18th century Native American villages in Beaver County, generally in the area of these adjoining streams. These streams play an important role in the settlement of Beaver County and it comes as no surprise that seventy percent of the archaeological sites recorded here are from riverine settings.


The fertile soils found along these river bottoms supported the lifeways of Native peoples in this region as early as the Archaic period 10,000 to 4,300 years ago. The Ohioview site, 36BV9, is a stratified site located on the banks of the Ohio River in central Beaver County not far from the town of Ohioview. It is a site with multiple prehistoric occupations along the river’s terrace for more than a mile. In the mid-1950’s features and artifacts were found eroding from the site when part of the river’s bank eroded out as a result of flooding. An earnest salvage operation commencing in 1955, was undertaken by members of the Amockwi Chapter, Society for Pennsylvania Archaeology (Alam 1961). Thus began a long and deeply committed study by the Amockwi Chapter that, over the years, revealed some of the site’s interesting past.

The Ohioview site proved to be a well stratified archaeological site. In the upper-most stratum (12-24 inches) the Chapter members found a Late Prehistoric Monongahela village that they identified by a partial palisade line and a number of circular-shaped hut structures. Indications of other huts were uncovered outside the palisade line hinting that multiple Monongahela occupations were present. Refuse filled features contained diagnostic points, shell tempered pottery, animal bone and the shells of river mussels. Other debris including stone hammers, stones with pitted surfaces and quantities of flint chipping debris were found around hearth stains.


Fragments of an earlier pottery type tempered with crushed limestone was also present in the upper-most stratum which archaeologists have identified as Watson ware, a Late Woodland pottery variety common to this section of the Ohio Valley. At a depth of 24-36” stratum pit features contained river pebbles and limestone fragments along with ground and pecked stone tools, choppers, a chisel and rubbed hematite.

From 36-48” the deposits at the Ohioview site contained differentially sized fire pits, having little more in them than fire altered rock and charcoal suggesting perhaps a function of drying or roasting food. In general, the deeper levels of the site are attributed to the Middle and Early Woodland periods. Mahoning and Half-Moon wares of these periods were found in abundance thereby demonstrating their importance as utilitarian wares at the site. Other diagnostic artifacts associated with this stratum included Forest Notched (a type of fishtail-like point) and sandstone bowl fragments, a counterpart to steatite bowls found in the eastern regions of Pennsylvania. Recurring flood episodes deposited a sand/silt level of 12-14 inches which covered most of the site helping to preserve these early occupation levels. Through the efforts of the chapter members the recovery and analysis of this important site has provided archaeologists a window into settlement patterns on flood plains.
﻿

Moving into the historic period we travel to Ambridge, just a short distance from Ohioview to another settlement on the river’s edge, Old Economy Village. 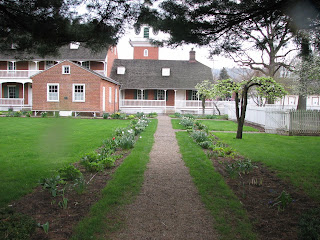 Old Economy Village was the home of the nineteenth century Christian communal group, the Harmony Society. Established in 1824, under the leadership of George Rapp, Economy was known worldwide for its piety and industrial prosperity. Members of the society followed Rapp from Germany seeking religious and economic freedoms. A central philosophy of the society was the expectation of Christ’s return in the Millennium and their desire for a “divine economy”. Both of these concepts are reflected in the layout of Old Economy Village and the gardens established by the society. The Harmonists were recognized for their successes in manufacturing, particularly in the production of wools, cotton and silk.

The formal gardens created by George Rapp as early as 1824 were planned in four sections. These sections consisted of vineyards, a Grotto (a stone structure for meditation and retreat), fruit trees, flower beds and the central area for a pond and pavilion with fountain. Influenced by German traditions and religious imagery the gardens were viewed as an expression of both social and economic position by visitors to Old Economy.

Recent archaeological investigations combined with extensive research of historic documentation have provided this historic site with valuable information for restoration of the garden. Archaeologists were able to identify planting methods for vineyards, concentric planting patterns for the gardens as well as historic paths. A brick lined root cellar located within the foundation of a shed/cow barn produced fragments of dishes and glassware which provide examples of tablewares previously used by the Harmonists.

The archaeology conducted at these sites was for two distinctly different reasons, but through careful excavation, recording and preservation archaeologists were able to answer questions about past human activities. In the case of Ohioview the excavations were necessitated due to the washing out of important archaeological features from repeated flooding. For Old Economy the archaeology was conducted to provide information important for the accurate historic representation of the landscape to visitors of this communal settlement. We hope you found this tour of Beaver county archaeology interesting and that you will continue to visit us as we travel across all sixty-seven counties. Awareness of our archaeological heritage is an important step in Preserving the Past for the Future.


For more information, visit PAarchaeology.state.pa.us or the Hall of Anthropology and Archaeology at The State Museum of Pennsylvania .
Posted by PA Archaeology at 5:26 PM