This week our focus will be on fire-cracked rock. Over the past two years of blogs we have frequently used the term fire-cracked rock and have described it at varying degrees of detail. We thought this week we could explain how fire-cracked rock is made and how its presence is an indicator of human activity on archaeological sites. 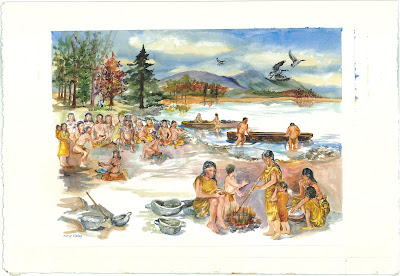 Fire-cracked rock is often associated with the Transitional Period which occurred about 3,000 - 4,000 years ago in Pennsylvania. Climatic changes which are thought to have occurred during this period led to a warmer, drier period which allowed for hunter-gatherers of the late Archaic (4200-6000 BP) period to become more sedentary and to occupy sites closer to rivers and streams for longer periods of time.

Many of the Transitional period sites contain extensive scatters of fire-cracked rock, that is, rock that has been exposed to extreme heat, causing it to break into angular pieces. Some of this is the result of normal cooking, as rock was often used in fire pits to radiate heat for roasting meat and other foods. Also, heated rocks were thrown into holes in the ground, lined with hide and filled with water, as a method for boiling foods. The large accumulation of fire-cracked rock on Transitional Period sites suggests that food was being cooked for large groups, and possibly during relatively long periods of site occupation.

Simply stated fire-cracked rocks are rock that are cracked or broken due to their use in either the boiling or roasting of foods. 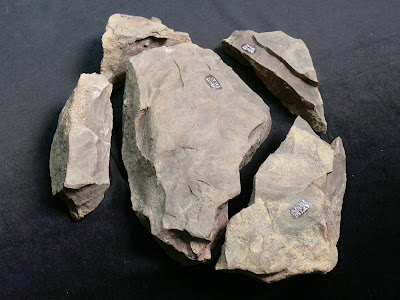 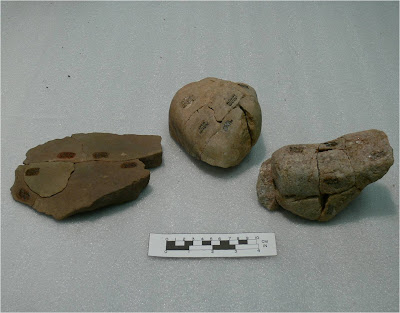 These fire-cracked rock have been refitted to allow for analysis of the distribution of the FCR across the archaeological site on which they were found.

Research conducted on these large fire-cracked rock features have provided archaeologists with comparative data allowing for analysis of the function of these features. At the Kettle Creek East site (36Cn199) a series of seventeen features were examined and radiocarbon samples were obtained on ten of the seventeen features. Nutshells of hickory, hazelnut and walnut as well as calcined (heavily burned) bone fragments were sampled for the resulting radiocarbon dates. Assays from these samples produced evidence of two occupation episodes ca. 3400 BP and ca 3050 BP, placing both of these in the Transitional period. 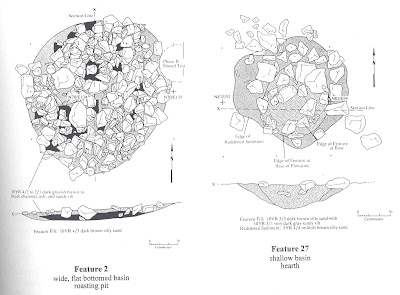 On the left is a wide, flat bottomed basin roasting pit. On the right, is a shallow basin hearth.

Functional interpretations of these seventeen features based on previous research by archaeologists provided a comparative model for identifying the function of these fire-cracked rock features. Most of the features were identified as hearths, some smaller hearths did not contain fire-cracked rock, larger hearths were classified based on their shallow basin shapes with an abundance of charcoal and the size of the fire-cracked rock fragments, two of the remaining features contained rock that were more angular- suggesting a repeated heating and rapid cooling associated with stone boiling. The video link at http://www.youtube.com/watch?v=RrlQwCxfvuU clearly demonstrates this process.

Petraglia, Michael, Dennis Knepper, and John Rissetto. "The Nature of Prehistoric Activities on Kettle Creek, An Upland Tributary of the West Branch of the Susquehanna." Journal of Middle Atlantic Archaeology 14 (1998): 13-38.

Posted by PA Archaeology at 4:03 PM