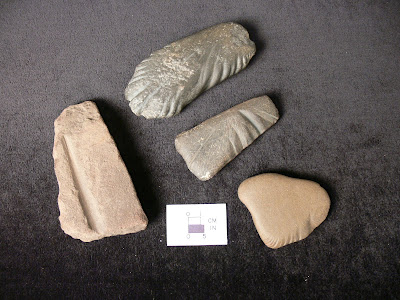 grooved and multi-grooved stones
Multi-grooved stones of various sizes and shapes have been found on Late Woodland and early Contact period sites in Pennsylvania and throughout the East. Although several hypotheses have been proposed, there is no agreement as to their function. These objects are thought to be involved in abrading, honing and sharpening although it is not clear as to the kinds of material that were being abraded, honed or sharpened. One unusual form of a multi-grooved stone is a “sinuestone”.

“. . .a tool with barely perceptible striations or deep V-shaped grooves
that are cut perpendicular to the edge of the stone and that are usually
deepest at the margin, becoming more shallow as they extend towards
the interior. . . “(Smith 1973:24) 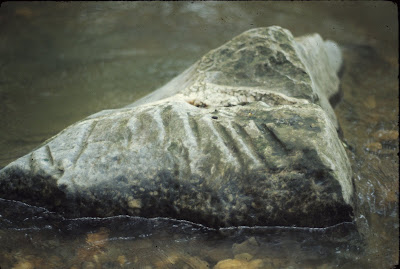 With the exception of the large Susquehannock arrow shaft polishers at Washington boro, Pennsylvania (Witthoft 1959), these grooved and multi-grooved stones were small, hand held and easily carried tools. Most often multi-grooved stones were made from cobbles of siltstone and fine grained sandstone that were readily gathered from nearby stream beds. One exceptional example in the State Museum collections is a small celt of granite that has numerous multi-directional grooves on its long axis, many of which are extremely well worn and somewhat polished. One might conclude from these observations that such grooves were formed by repeatedly drawing strips of dried rawhide over the stone’s surface. The process would easily render sun cured leather into a more acceptable material from which to make clothing. A similar procedure may also have been used to process plant fibers to make cordage, rope etc. 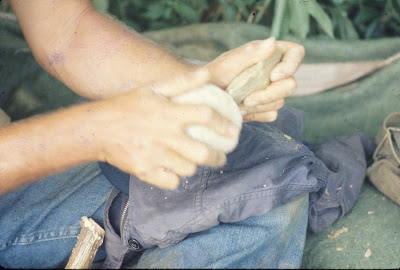 On specimens where the grooves are more multi-directional than parallel, and appear more abraded and battered than smoothed and polished, their function is likely related to making stone tools. Using these tools, it was possible for the flint knapper to prepare and/or roughen the margins of a biface, thereby allowing for successful removal of additional flakes when making an arrowhead or re-sharpening one.

For more information, visit PAarchaeology.state.pa.us or the Hall of Anthropology and Archaeology at The State Museum of Pennsylvania .
Posted by PA Archaeology at 3:57 PM