As we left the excavations at 1325/1327 Arch Street Philadelphia last week, a large ceramic vessel was emerging from the ash of a feature located within the five bay brick foundation. Anticipation and hopes were growing that this vessel may hold the answers to how the five bay brick foundation was used and perhaps help archaeologists to interpret and date the feature… 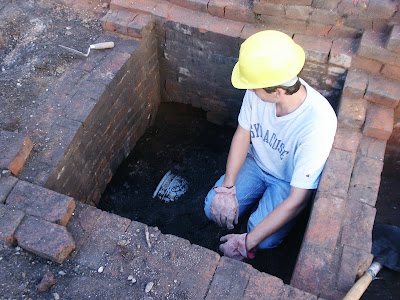 Although the vessel was in surprisingly good condition, and is the only one of its kind in the Archaeological collections of The Pennsylvania State Museum, it was not associated with the brick foundation. It was instead a very ornate and early toilet. 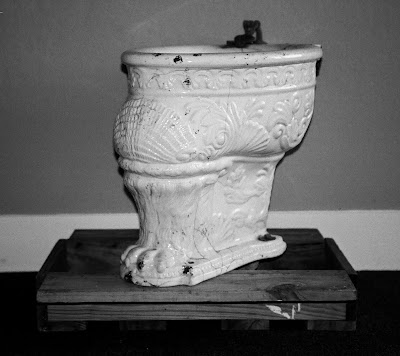 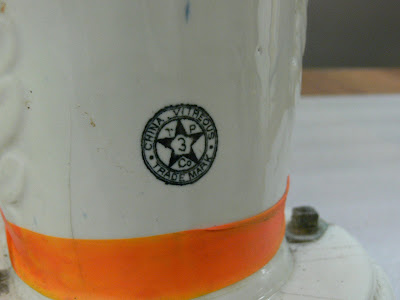 The toilet’s maker’s mark shows that it was manufactured at the Trenton Potteries Company of Trenton New Jersey in 1902. This date suggests that it was added towards the end of the Cresswell’s occupation of the home. According to the historic record, Robert Cresswell leaves the property to his wife Elizabeth in 1892 and by the time of the 1900 census it appears that she may have taken boarders into the home. Although she retains ownership of the home at 1327 Arch Street until 1910, research indicates that she no longer lives there after 1900.

If Mrs. Cresswell owns the home in 1902, then she must have installed the toilet. The trouble with this hypothesis is that the home was used as a boarding house from about 1900 thru about 1920. It doesn’t seem likely that this highly decorative toilet would be installed for working class boarders. Which begs the question where did it come from and why is it here? As is often the case in archaeology, the closer we think we are to the answers, the more questions we actually raise.


We did some research on toilet manufacturing and contacted some vintage bath fixture shops (Historic Houseparts, Inc. and Vintage Plumbing) and they were able to supply us with some specifics on our toilet. What we learned is that this particular toilet is a front washout style bowl, this was one of the earliest and most “primitive” ceramic toilet bowls invented. It has not been sold in the U.S. for about a hundred years and is now only found in a few places in Europe. This design would have most likely used a pull chain attached to a tank that was mounted on the wall above the toilet. The plain undecorated version of this toilet would have been a very common and inexpensive style at the turn of the 20th century, exactly what we would expect to find in a boarding / tenement setting.

The heavily ornamented embossed bowl would have been reserved for the upper class. They were the people that were more inclined and able to spend the money on high style. During the Victorian era people of means surrounded themselves with ornately decorated homes and objects, even in the bathroom, and this particular design “was one of the most creative”. The claw foot was a very popular motif on all things from furniture to bathtubs. It is quite possible that this design was manufactured specifically for Fleck Brothers Manufacturing Company; their 1899 catalog depicts a similarly ornate bowl. Fleck Brothers was located at 50 North 5th Street in Philadelphia so it would have been accessible to the Cresswell’s. 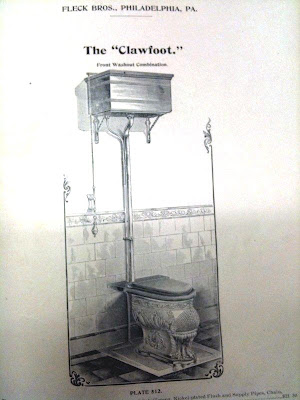 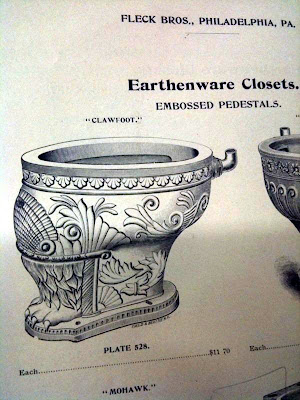 Images in the Fleck Brother's 1899 Catalog

Mrs. Cresswell had the means to install fine furnishings in the home, but why she would spend the additional money on an ornate toilet over the plain toilets typically installed in boarding homes is a question we can not answer. Is it possible that she loved this home that she had lived in for nearly fifty years and wanted to outfit it with fine furnishings? The transition to working class neighborhood was just beginning- was this an attempt to retain civility and status in her home? Can you relate these questions to your own human behavior and inclinations?


It was once considered a very taboo topic to discuss sanitary disposal or even acknowledge such basic human practices. Anyone that dared to “study” such subjects was seldom taken seriously and more likely to be considered deranged. Perhaps that is why the knowledge of waste removal has come and gone so many times throughout human history. From as far back as 2500 B.C. the Harrappa civilization in what is now India, had cities that were laid out on a grid with sewer drains under the roads. The Crete’s and Roman’s also had water born waste removal in their cities. As the study of man, i.e. Anthropology has evolved to consider ALL aspects of human behavior we have found much value in studying even those objects we once took for granted.

The artifacts left by those before us, be it during pre-history or the historic period are the physical evidence of lifeways often undocumented and lost to history. These traces of who we are provide archaeologists with the connection to what matters to individuals and societies and helps anthropologists predict changes in society. Reflect for a moment on the transformation of socioeconomic levels of these occupants of 1327 Arch Street in Philadelphia during the transition from the19th to 20th centuries at the height of the Industrial Revolution.

Posted by PA Archaeology at 3:38 PM