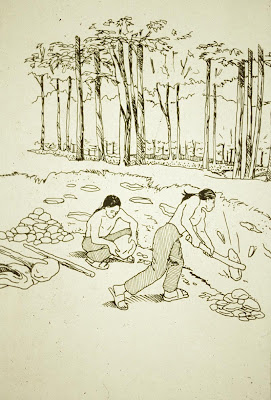 The production of stone tools dates to 2.6 million years. By the time our ancestors arrived in Pennsylvania, at least 16,000 years ago, they had mastered this technology and were using relatively sophisticated flint knapping techniques. During Paleoindian times (11,150 to 10,000 years ago), these early inhabitants in Pennsylvania quickly discovered the best quality stone for tool manufacture, preferring cherts and jaspers. Paleoindians frequently traveled well over 200 km to obtain the highest quality material in the region. Metarhyolite and quartz were added to the list of preferred lithic materials for chipped stone tools during the Early Archaic period (10,000 to 9000 years ago). By Middle Archaic times (9000 to 6000 years ago), there did not seem to be strong lithic preferences and Native Americans used a variety of materials that were available locally. This trend lasted until the Transitional period (4000 to 3000 years ago) when there was a return to a very strong lithic preference for jasper, metarhyolite and argillite. These three lithic types are all found as bedrock sources in Pennsylvania and were traded throughout the Northeast and Middle Atlantic regions. Interestingly, after the Transitional period, there is a return to mainly the use of local lithic materials.

Pennsylvania contains some of the best stone for tool production in the Middle Atlantic region and some of this material has been used for over 11,000 years. When Native Americans first arrived, high quality lithic materials were probably exposed on the surface in bedrock outcrops or as boulders. Lithic quarries represent the earliest preserved industrial sites. Prehistoric lithic quarries are spectacular for their shear quantity of artifacts and they attracted a great deal of attention from professional archaeologists in the late 19th century. However, they are very difficult to excavate because in 11,000 years of digging, the artifacts from different time periods have a tendency to become mixed.

Different techniques were used to extract the stone for tools and early Native Americans demonstrate a surprising knowledge of geology. Quartzite and quartz are usually available on the surface of the ground. In this case these “quarries” were simply large areas where the material is slowing eroding out of the bedrock. The recovery of suitable material did not require much effort and therefore not many artifacts were left behind. Many of the cherts in the Ridge and Valley physiographic zone were found in thin layers (four to twelve inches thick) and were extracted from the bedrock using levers, wedges and stone hammers. The remains of these kinds of activities were minimal and relatively speaking, there are few artifacts at these sites.

The Catoctin metarhyolite in South Mountain (Adams and Franklin counties) was originally (800 million years ago) a lava flow but was folded in a mountain building episode about 300 million years ago. In some cases the folding process improved the stone’s quality for making tools and in other cases, it ruined the stone for use in tool manufacture. In addition, surface exposed metarhyolite dehydrates and the flaking qualities are reduced. Clearly, Native Americans excavated for good quality material and the quarries are characterized by many small, saucer and cone shaped pits covering many acres of ground. The pits are usually less than eight feet in depth and twenty feet in diameter. They include huge quantities of low grade material ordinarily discarded at the quarry; hammerstones were very large to small in size as were stone hoes used as digging implements. Quarry pits were subsequently filled in as adjacent areas were quarried. Tree throws and erosion often completed the filling of these pits, leaving barely perceptible depressions. Today, the quarry pits show up as small depressions that have been backfilled prehistorically by the excavation of adjacent pits and historically by erosion. 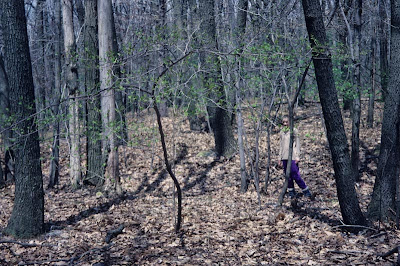 The Hardyston jasper in Berks and Lehigh counties was formed by the earth’s pressure on sandstone and quartzite. Jasper forms in large irregular masses, covers several acres in extent and sometimes over 40 feet thick. It was concentrated in a limited space and thus very highly desired by Native Americans for stone tool manufacture. After the surface jasper was used, probably during Paleoindian times, Native peoples dug for the material. Based on excavations conducted by PHMC archaeologists, some of the quarry pits investigated were found to be over twenty feet deep and at least 80 feet in diameter. At the Kings Jasper Quarry (36Lh2) in Lehigh County, Paleoindian artifacts were found at the surface next to a quarry pit that after archaeological excavation proved to be twenty four feet deep. A number of charcoal samples were collected from a sloping layer of jasper that indicated a stable surface within the quarry pit when it had reached its maximum depth. The dates assessed to approximately 1600 years ago. 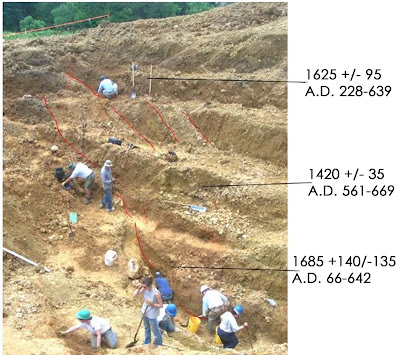 This photo depicts the profile of a 24 foot deep Native American dug pit at the Kings Jasper Quarry site in Lehigh County. The carbon 14 dates mark a relatively stable, steeply sloping surface created after the pit began to backfill. This occured due to natural processes and probably additional Native American quarrying activities in adjacent pits.


In the prehistoric world, stone quarries were special places and high quality stone had a spiritual value. Based on ethnographic studies, special ceremonies were conducted at quarries. Deep holes were frequently thought of as entrance ways into other worlds. All religions serve, in part, to explain their surrounding world. In the Stone Age mind, quarries were probably indistinguishable from the creation stories that explained their origin.

On February 10, Dr. Kurt Carr of The State Museum, Section of Archaeology, will give a presentation to the Harrisburg Area Geological Society/Association of Engineering Geologists. The meeting will be held in the GTS building on Friendship Road, just past the Bass Pro Shop at 7:00 pm and is open to the public. This presentation will review the major quarries in Pennsylvania used by Native Americans, focusing on the jasper quarries in Lehigh and Berks counties and the metarhyolite quarries in Franklin and Adams counties.


For more information, visit PAarchaeology.state.pa.us or the Hall of Anthropology and Archaeology at The State Museum of Pennsylvania .
Posted by PA Archaeology at 2:56 PM