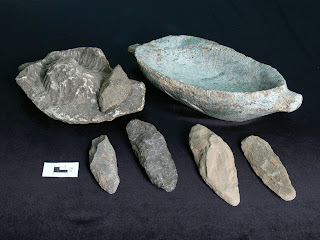 This unique artifact type is principally found on Susquehanna and Delaware Valley sites of the Transitional Broad Spear Tradition circa 3500-4000 years ago. In terms of function, stone picks were prehistoric mining implements used to extract blocks of steatite from outcrops found in the east-central Piedmont region of southeastern Pennsylvania. Once quarried, the blocks of steatite, also known as soapstone because of the material’s slippery feel when handled, were carved into stone bowls and other utilitarian containers used in boiling liquids and cooking food.
Stone picks, shown here, were made from hard resistant lithic materials like diabase, hornfels and basalt, also local to the Piedmont region. These crudely made bifacially formed tools usually have an elongated shape 11 – 20 centimeters in length and possess a blunt or nearly rounded poll. The opposite end normally tapers to a point or bit which acts as the tool’s working edge used to carve and shape the soft blocks of steatite into finished bowls and other items. Upon close examination the working or tapered end on these tools is characterized as chisel-like, a part of the tool that had to be intentionally sharpened with an abrasive honestone of gritty gneiss or sandstone. Rarely were stone picks bi-bitted although one example in our collection has a bit point on each of its ends.
Many of the steatite containers in the State Museum of Pennsylvania retain the residual chisel-like scars of the stone pick. Most often these scars form parallel discontinuous grooves on the exterior and basal portions of the bowl. Rarely are the telltale grooves evident on the bowl’s interior face where the scars were apparently scraped smooth during the final production stage. 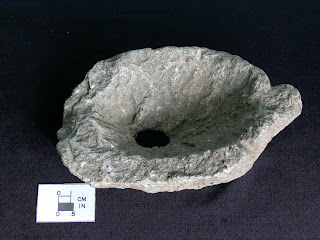 Certainly the quarry pick was a crude tool aesthetically, but it was also an important element of the Transitional Broad Spear Period tool kit. It was an implement used to make other implements, that in turn, supported a cooking technology new to the region that accommodated an improved way of life well before the development of ceramic containers at the onset of the Woodland period about 3000 years ago.

For more information, visit PAarchaeology.state.pa.us or the Hall of Anthropology and Archaeology at The State Museum of Pennsylvania .
Posted by PA Archaeology at 3:01 PM