Our guest blogger this week is Dr. Bernard K. Means. Dr. Means has been conducting research for several years on some of the collections curated at The State Museum which were excavated under the Works Progress Administration (WPA) in Pennsylvania during the 1930’s and early 40’s.
This week’s artifact is a fragment from the rim of a pottery vessel recovered from “Fire Pit 10” at the Gower site (36So6) sometime between December 20, 1939 and March 2, 1940. 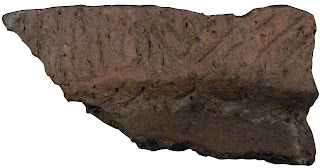 The site’s excavations were directed by Edgar E. Augustine, Sr., as part of a series of Work Projects Administration (WPA)-funded investigations in Somerset County, Pennsylvania. 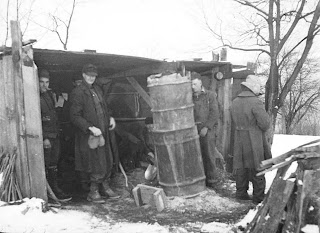 The WPA was one of Franklin Delano Roosevelt’s New Deal programs and was designed to provide work for the unemployed during the Great Depression.

The Gower site is a somewhat enigmatic Monongahela tradition village located near the Borough of Confluence, on a saddle just below the better known site of Fort Hill (36So2). The WPA excavations at the Gower site encountered a fairly large palisaded enclosure destroyed partly by erosion, as well as traces of nine dwellings, one grave, six so-called “refuse pits,” and eleven hearths, labeled as “fire pits.” 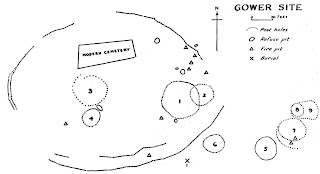 Three of the dwellings—Houses 1, 3, and 4—appear to have been associated with the palisaded enclosure, while the remaining dwellings—including House 2—formed an arc that overlaps the palisade. Two radiocarbon dates were obtained from the Gower site through the dating of burned food adhering to the interior of two pottery vessel fragments that are in the archaeology collections of The State Museum. Only one of these dates was valid and showed that the palisaded part of the Gower Site probably dated to the end of the thirteenth century A.D. 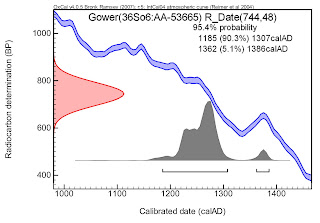 Radiocarbon date from Feature 1 at the Gower Site

Unfortunately, no other material suitable for obtaining radiocarbon dates exists in the Gower site collection at The State Museum. This collection is fairly small, consisting of just under 100 pottery vessel fragments, likely because most artifacts were given back to the farmer who owned the Gower site—this was the typical WPA practice in Somerset County. With the exception of the vessel fragment shown here, most of the pottery vessel fragments were fairly unremarkable, tempered either with crushed shell or limestone, and therefore not that useful in providing another possible date for the Gower site.

Analysis of the field records and artifacts resulting from the WPA excavations at the Gower site is ongoing by Dr. Bernard K. Means. The Gower site was the only WPA-excavated village site in Somerset County that was not subject to an article by lead excavator Edgar Augustine in the pages of Pennsylvania Archaeologist and Dr. Means is working to correct this situation.
Details on New Deal archaeology in general, and specifics on the work relief excavations in Somerset County can be found at:
http://www.portal.state.pa.us/portal/server.pt?open=512&objID=4671&&SortOrder=100&level=4&parentid=3891&css=L4&mode=2

For more information, visit PAarchaeology.state.pa.us or the Hall of Anthropology and Archaeology at The State Museum of Pennsylvania .
Posted by PA Archaeology at 2:58 PM