The Search for Fort Hunter Continues 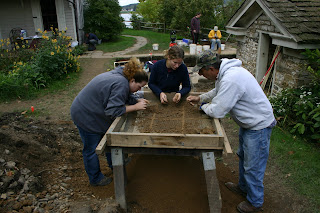 With the second to last week of excavations completed, the French and Indian War period Fort Hunter is proving to be elusive as ever. The feature initially interpreted to be the builder’s trench for the ice house did not pan out as the excavation in that square deepened. A similar anomaly on the north wall of the ice house was unearthed, only to contain whole, terra cotta flower pots. It seems our builder’s trench in reality was nothing more than an ornamental flower bed. Never the less, in the adjacent unit to the north of where the 1724 half penny was found, and at a similar depth, a small French flint, probably for a pistol, was recovered.

Another historic feature defying interpretation is a shaft feature to the immediate west of the well structure. One of the volunteers at the site, Jerry, has been tirelessly and skillfully excavating this feature to a depth of over four and a half feet. Completion of this task would not have been possible without his help. 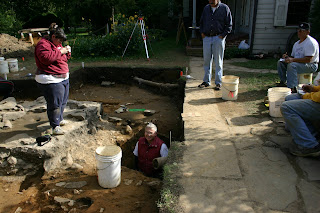 Sediment layers surrounding the well structure in the main excavation block continue to produce prehistoric features and artifacts, slowing any progress that could be made on the well itself. A few post molds, chipping debris of a variety of lithic types and even a projectile point or two have been found, but the surprising discovery is the amount of prehistoric pottery, preliminarily identified as Middle Woodland in origin. Although the prehistoric occupation is not the focus of our efforts, careful excavation and documentation is necessary to recover the complete picture of the historic resources at Fort Hunter Park. 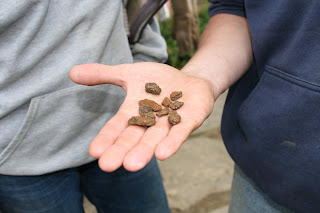 An exploratory trench was dug in the front yard of the mansion with the help of a class of forensic science students led by Ms. Mary Pat Evans of Susquehanna High School. Searching for structural evidence of the fort, they learned the field techniques of excavation and screening for artifacts in an archaeological setting. Thanks go to Mary Pat and her students for the hard work and a job well done. 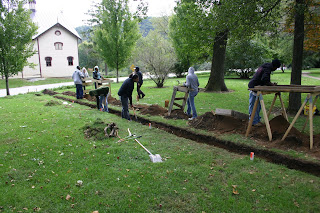 Sunday October 4th marks Indian Festival Day at Fort Hunter Park, and among the many activities and exhibits, archaeologists will be on hand to answer questions about the ongoing excavation. The dig site is open to the public, Monday through Friday 9 AM to 4 PM, and volunteer sheets are available for those wishing to assist us in our search for the fort at Fort Hunter Park.

For more information, visit PAarchaeology.state.pa.us or the Hall of Anthropology and Archaeology at The State Museum of Pennsylvania .
Posted by PA Archaeology at 9:49 AM