Archaeology Day at the State Capitol 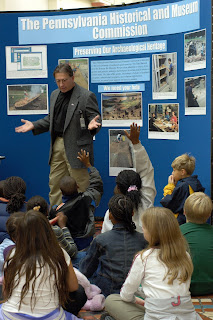 To quote from the SPA web site on the value of archaeology:
“Men, women, and children have lived in the Commonwealth for nearly 14,000 years. Yet only a small portion of that time is documented on paper. Archaeological evidence often represents the only surviving record of Pennsylvania’s prehistory and can provide new information about where, when and how these people lived in the past”

We might add that this information can also be used to improve our own future.

At noon, there will be a ceremony for the John Stuchell Fisher Award. This is given in recognition to local, state and national officials who contribute to the promotion and understanding of archaeology in Pennsylvania. This year’s recipient is Mark Platts, President of the Susquehanna Gateway Heritage Area. He is receiving this award for efforts in preserving archaeological resources in Lancaster and York counties. Of special significance is his successful initiative to preserve the last two villages occupied by the Susquehannock tribe in the 17th century prior to their demise in the region. Steve Warfel, former Senior Curator of Archaeology at The State Museum of Pennsylvania will comment on the significance of this work. The speakers will begin at 12:00.

Archaeologists from the Section of Archaeology of The State Museum and the Bureau for Historic Preservation will represent the Pennsylvania Historical and Museum Commission. The Section of Archaeology serves as the primary repository for archaeological collections and holds over four million archaeological specimens in trust for the citizens of Pennsylvania. They are also responsible for the Hall of Anthropology and Archaeology in the State Museum which provides a comprehensive tour of Pennsylvania archaeology from the Paleoindian period through the 19th century. On display at the Capitol will be a spectacular array of artifacts from sites in York County reflecting the Susquehannocks involvement in European trade. 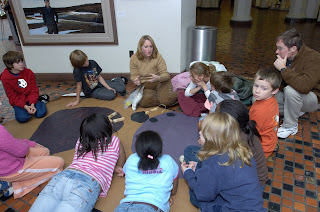 Of particular interest to the younger generation, the Pennsylvania Archaeological Council and Indiana University of Pennsylvania will put on a demonstration in the early afternoon on Native American technology. For nearly 14,000 years, people lived in Pennsylvania without factories, automobiles or convenience stores. They used a relatively simple technological system to get their food, to make their clothing and obtain all of their material needs. Tying and attaching things with string and rope was a very common activity and essential to their lives. Everything from bow strings to fishing nets was necessary but where did they get the yards and yards of cordage to make these items? Cordage in Native American cultures was like duck tape is to our culture. The children visiting the exhibit will be invited to try their hands at making cordage and using a prehistoric drill. Think of all of the holes that need to be drilled into items to make them functional. This event will begin at 12:30.

The Pennsylvania Department of Transportation also has an active archaeology program. As part of their environmental stewardship program, they endeavor to protect archaeological sites that may be affected by their construction projects. For decades they have been conducting archaeological investigations prior to construction and they have recovered significant information on past cultures in Pennsylvania. They have developed a publication series and examples will be available, including their most recent publication on the archaeology conducted along the route 11/15 corridor.
The Society for Pennsylvania Archaeology will have an exhibit describing the variety of activities they conduct around the Commonwealth to enhance and protect archaeological sites and artifacts. The local chapter, Conejohela Chapter 28, will have an exhibit presenting their involvement in preserving the Susquehannock sites in the lower Susquehanna Valley.
For more information, visit PAarchaeology.state.pa.us or the Hall of Anthropology and Archaeology at The State Museum of Pennsylvania .
Posted by PA Archaeology at 3:46 PM