My Name is Alaina Helm, I interned with the Section of Archaeology during the summer of 2009, and I am a Junior at Oberlin College in Ohio. You may already have seen my other posts about previous projects I have worked on: lithic analysis of Kings Quarry (36Lh2) and refitting debitage from Eelskin Rockshelter (36Bu159). This post is about another project I completed this summer doing experimental archaeology on end scrapers under the direction of Dr. Kurt Carr, Senior Curator, The Section of Archaeology at The State Museum of Pennsylvania.
Prehistoric peoples demonstrate a preference for different lithic material types during different time periods. Paleoindians (10,000 to 12,000 years before present) preferred jasper and chert for making stone tools, despite inhabiting areas in closer proximity to alternative materials such as argillite and metarhyolite. During the transitional period (2800-4300 years before present) argillite and metarhyolite were intensively used throughout the Mid-Atlantic region.  With this knowledge in mind, we wanted to perform an experiment regarding the lithic composition of end scrapers to determine if there is a reason for biases towards certain lithic materials in the archaeological record.  Prehistoric peoples demonstrated a preference towards jasper scrapers despite being in closer proximity to other sources of useable material such as argillite. To determine if there was a functional reason for obtaining different materials from farther afield, we made scrapers of several materials and underwent experimental scraping with them. The goal of the experiment was to observe variations in wear patterns and effectiveness in scraping pieces of wood by using different materials. 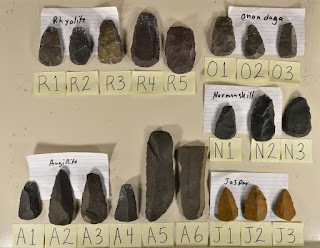 Scrapers made for our experiment from various materials. Each scraper was assigned an alphanumeric designation for tracking purposes.

Before beginning our experiments, I researched the literature to see if anyone had performed and written about a similar experiment. Although numerous articles have been published about use wear on scrapers, none of the articles compared wear between various lithic materials.  Our experiment consisted of several scrapers of varying materials created for the experiment by expert flint knapper Steve Nissley. The materials used were argillite, metarhyolite, jasper, quartzite, Normanskill chert, and Onondaga chert. All scraping was done on soft wood because it is easier to acquire than hide and would more quickly produce wear because it is a harder material. 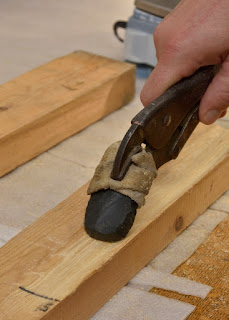 Before being used, the scraper was hafted by channel lock pliers.

The experiment was performed by hafting an end scraper using pliers padded with softened rawhide. The tools were then used in increments of 500 scrapes with a stroke length of thirty-two centimeters. The number of scrapes were carefully counted, and stroke length and strength was kept as uniform as possible to ensure consistency. Two sets of scrapers were used; one set was used by a variety of people including museum staff and volunteers, and the other set was used by only me. Having scrapers used by several people allowed more scraping to be performed faster without limitations caused by fatigue. Because several thousand scrapes needed to be performed for the experiment, having a separate set used by only one person allowed for a controlled comparison. The scrapers were photographed from multiple angles and at multiple magnifications using a Dino-Lite digital microscope with the highest resolution images at around 200x magnification. The scrapers were also measured using digital calipers at designated reference marks drawn on the scraper for consistency. All measurements and photographs were taken before the scrapers were used and at regular intervals of scraping to ensure a consistent record of wear on each scraper. 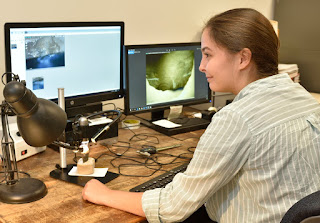 Alaina takes measurements and photographs of the experimental scrapers.

The high-resolution images revealed that Argillite and Metarhyolite seemed to wear down faster with more visibly rounded edges than the Normanskill and Onondaga cherts, quartzite, and jasper. The chert scrapers showed a higher level of effectiveness than the jasper and the quartzite scrapers. Effectiveness was gauged by measuring the depth of the gouge each scraper created after the same number of scrapes. The argillite and metarhyolite scrapers shallower gouges than the jasper and chert scrapers, and the jasper scraper was slightly less effective than the chert scraper. These results suggest that the reason cherts and jaspers were the preferred materials for scrapers was due to their increased effectiveness in comparison with materials that may have been easier to obtain. 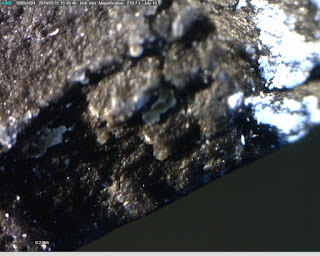 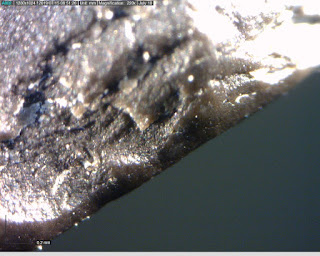 Argillite scraper with no wear (top) and after 500 scrapes (bottom).

This experiment was an interesting way to learn about lithic wear and get hands on experience with experimental archaeology. It allowed me to experience the nuances of designing an experiment and the difficulties in separating wear in differing lithic types. I learned a lot about aspects of experimental archaeology that are often not fully appreciated without the experience to back it up. This will help inform the way I approach any similar projects in the future. For example, on paper, scraping something 1000 times does not seem to be much until you realize that the individual scraping will need breaks. It is nice to occasionally switch up activities as well to make such experiments endurable.  I hope that my time with the Section of Archaeology at the State Museum of Pennsylvania will provide me with insight and experience during the planning and preparation of future research and will help to form a foundation on which I can further add to the results of our research.

September 14, 2019 - Delaware County Archaeology Day at Newlin Grist Mill in Glen Mills, PA
This festival features a full day of hands-on activities. Visitors will be able to work with professional archaeologists and assist with three different excavations. An archaeologist from The State Museum of Pennsylvania will be on hand to answer questions.

September 15, 2019 - Fort Hunter Day at Fort Hunter Mansion and Park in Harrisburg, PA
Archaeologists from The State Museum of Pennsylvania will be conducting excavations in the mansion’s back yard during the park’s annual fall festival celebrating the old-time ways of life. Since 2006 archaeologists have been documenting archaeological evidence from the past occupations at this site dating from approximately 9000 years ago to the present day.

For more information, visit PAarchaeology.state.pa.us or the Hall of Anthropology and Archaeology at The State Museum of Pennsylvania .
Posted by PA Archaeology at 9:06 AM