In some of our previous blog posts we have looked at other ceramics produced in the early years of the 19th-century in Philadelphia (for example, see Made in America: Philadelphia Queensware Pottery in the Early 19th Century, December 16, 2016), but now we turn to some pieces that are a little more mysterious.

Philadelphia was the largest urban area in the United States at the turn of the 19th-century and many important potteries operated there. Several of these potteries were located in the oldest sections of the city. One of these was the Abraham Miller Pottery on Zane Street (now Filbert) between Seventh and Eighth Streets. An earlier pottery, owned by Daniel Topham, was established on this lot in the 1760s. Topham is believed to have produced mainly red earthenwares (redware) at his pottery, using clays dug from nearby parts of the city. Following Topham’s death in 1783, the property was purchased by Andrew Miller, Sr., who also produced redwares.  Miller appears in the 1798 federal tax assessment as owning a “house & Lott in Zan st” as well as a frame stable and brick pot house.By 1799, Andrew Miller, Sr’s oldest son Andrew, Jr. had joined him in the running of the pottery. His younger son, Abraham, is listed in city directories for 1806-1808 as a “potter” and it is not known if he was a partner at that time.

In 1809, the two sons took over the operations of the pottery from their father. They became known for production of “Common coarse earthen ware”, mainly in the form of black and brown tea pots. Andrew, Jr. died in 1821 and their father in 1826 and Abraham took control of the pottery. He soon added black and red tea and coffee pots, portable earthenware furnaces, fire bricks, sugar molds, and other ceramic wares to the production.  Miller became highly successful and moved the manufacturing portion of his works to a new site on James Street, while retaining the warehouse at Zane Street. In the 1850s, he bought property on Callowhill Street and moved his operations there. 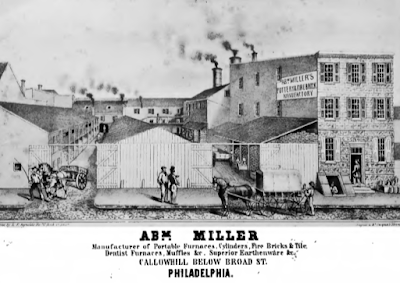 The State Museum of Pennsylvania (TSMOP) curates several pieces of Abraham Miller’s pottery. We know that this is Miller’s work due to the fact that these pieces are marked on the base with “ABM MILLER”, as seen in the photo below. “Maker’s marks” such as this one were often used by potteries to identify their work to the public. A maker’s mark can consist of a company name, an individual’s name, or even a symbol, such as an anchor or an eagle. 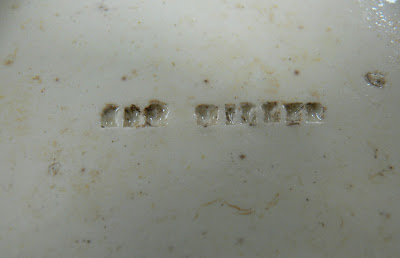 Abraham Miller Maker’s Mark on base of bowl

Although archaeological excavations have been conducted on the site of the Topham and later Miller pottery in Zane Street (the Metropolitan Detention Center Project, site 36Ph91), most of the recovered artifacts reflect only Topham’s redware production here. No marked or specifically Miller-identified pieces were recovered from this site.

However, marked Abraham Miller ceramics have been found elsewhere in Philadelphia. The pieces of Miller pottery in the TSMOP collections were recovered from two archaeological sites about two blocks from the Miller pottery on Callowhill Street - sites 36Ph49 and 36Ph84.  Site 36Ph49 was discovered during investigations for the Gateway Redevelopment Project that were conducted in 1991. The Gateway parcel was located within the block bounded by North 15th, North 16th, and Spring streets and the Vine Street expressway exit ramp.\

A bowl, a baking dish, and two plates with Miller’s mark were recovered from 36Ph49. The two plates are identical and may have been part of a set. They resemble yellow ware in color but have a hard white paste and dimpled glaze that looks like orange peel, which is usually indicative of salt-glazing (adding salt to the firing process). 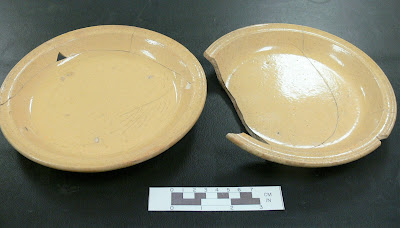 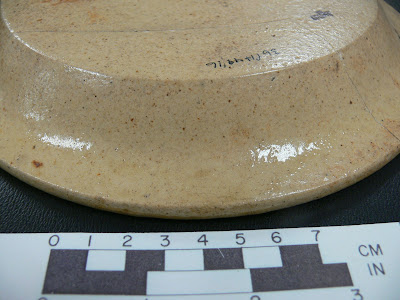 Orange peel-like dimpling in glaze of plate, indicating salt-glazing in the kiln

The bowl is cream colored and unevenly shaped with orange peel dimpled glaze. It is reminiscent of creamware but is too thick and poorly glazed to be categorized as such. 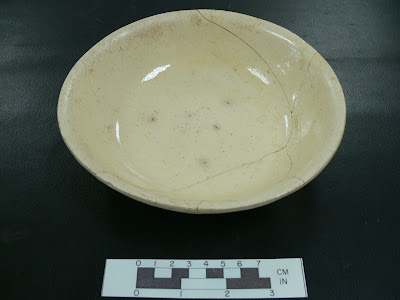 The baking dish is also a thick and poorly glazed piece with a greenish-yellow color and vitreous paste. 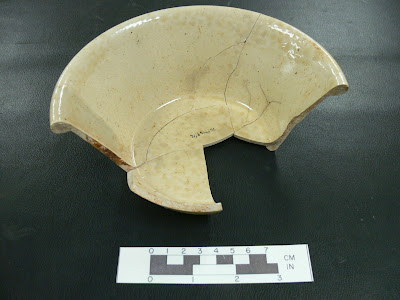 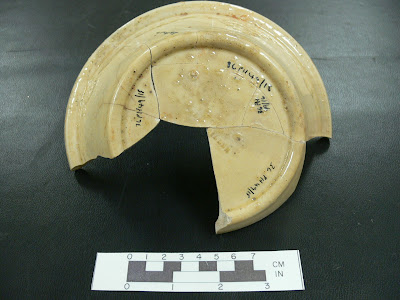 Site 36Ph84 was located approximately a block north of site 36Ph49 under what is currently the Vine Street Expressway and was discovered during surveys for that project. Once a residential neighborhood, the buildings here would have been demolished to make way for the highway. A bowl and a plate with Miller’s mark were discovered at this site. The plate is the same size and design as the two plates recovered from site 36Ph49 except that the appearance is more in line with a typical yellow ware piece. 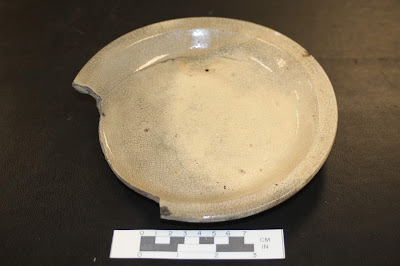 The wide-lipped bowl is similar to the baking dish from 36Ph49. The appearance of the glaze is a greenish-yellow and is burned and bubbled in many spots. This piece is heavy and thick with a hard paste. 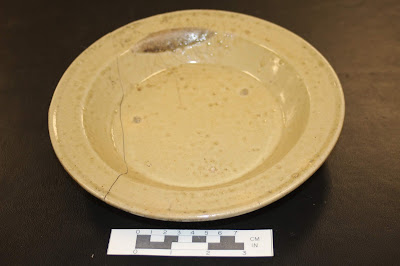 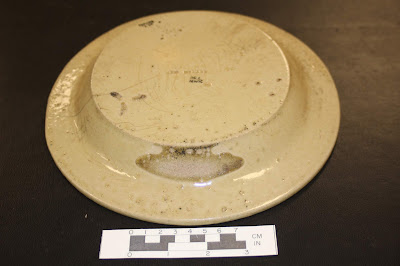 Back of bowl from 36Ph84 showing over-fired glaze

So, what do we make of these strange pieces that don’t exactly “fit the mold”? Abraham Miller is known to have experimented throughout his career with various types of earthenwares – porcelain, white earthenware, queensware, yellow ware, Rockingham-like brownware, and bisquit. It is quite possible these pieces in the TSMOP collections represent examples of the experimentation of Abraham Miller in his pottery. Perhaps he was trying to invent a new type of pottery by putting together different combinations of glazes, pastes, and firing techniques, but couldn’t quite perfect it before his death in 1858.

Until more is known about Miller’s work, it is possible to continue to speculate about these unusual specimens. And to wonder what other interesting pieces may be in the collections that are not marked with Miller’s name…

We hope you have enjoyed this post and encourage you to read more about this early industry in Pennsylvania and potteries in your community. A current exhibit at Landis Valley Farm Museum (https://www.landisvalleymuseum.org/explore/collections/visitor-center-exhibit/) highlights some of the redware potters of Pennsylvania and includes pieces from the archaeology collection of the State Museum.  Preserving the history and works of these early crafts is important in recognizing the value of archaeology in our communities and appreciating our heritage.
Sources Used and Additional Reading:
Barber, Edwin Atlee
1893    Pottery and Porcelain of the United States. G. P. Putnam’s Sons, New York. Reprinted 1976 by Feingold & Lewis, New York, NY.

For more information, visit PAarchaeology.state.pa.us or the Hall of Anthropology and Archaeology at The State Museum of Pennsylvania .
Posted by PA Archaeology at 1:49 PM