This Week in Pennsylvania Archaeology will focus on the Meadowood projectile point type. This projectile point type was originally identified and defined in central New York, primarily from cremation burials, but also found at habitation sites. The type is named after the estate of Delos Wray at West Rush, Monroe County, New York where the points and cache bifaces were found in a small cemetery excavated by Charles F. Wray in 1930 (Ritchie 1969: 179). 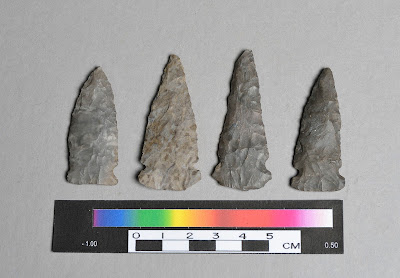 The Meadowood point type is found at habitation sites associated with Vinette 1 and exterior cordmarked/interior smooth pottery. Some of these were used as projectile points, knives and scrapers. However, this type is best known from cremation burials and its association with banded slate gorgets, tubular pipes, popeyed birdstones, boatstones, copper beads shell beads and biface caches.  This assemblage seems to represent a distinctive shared belief system and an associated trade and exchange system found throughout the Middle Atlantic, Eastern Great Lakes and southern New England regions. 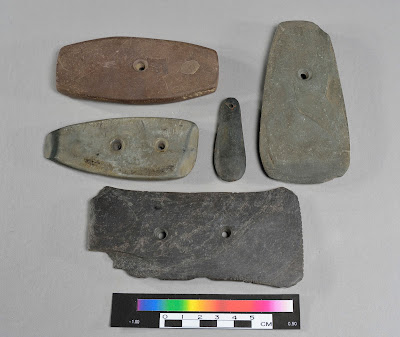 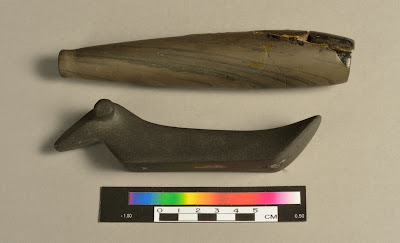 According to Ritchie (1961: 35), the Meadowood projectile point type is a thin, medium to large, side-notched point averaging 57 mm to 70 mm in length and 5 mm in thickness. The base is straight or convex and about half are ground smooth. The side-notches are small and there are a few examples of double notched specimens. Kinsey (1972: 435) found that in the Upper Delaware about half display serrated edges. The final stages of production involved careful pressure flaking. This biface form is also found un-notched as cache blades, sometimes numbering in the hundreds in cremation burials. As one of its most distinctive characteristics, the lithic material type is almost always Onondaga chert. This chert is found in western New York and the bifaces were acquired through an extensive system of trade and exchange extending hundreds of kilometers. Richie (1961: 35) dated Meadowood points to between 3000 BP and 2400 BP. Kinsey (1972: 362) dates these between 2950 BP. and 2500 BP. This biface type generally follows Fishtail points in eastern Pennsylvania and the Meadowood phase represents the beginning of the Early Woodland period.

Meadowood points are found throughout Pennsylvania although mainly in the northern sections of the main river drainages. Kinsey (1972) reported Meadowood occupations at both the Faucett (36Pi13A) and Zimmermann (36Pi14) sites in the Upper Delaware Valley where they are particularly common. They are also common on the North and Main branches of the Susquehanna river and Turnbaugh (1977) reports a concentration in the Williamsport area of the West Branch. The Meadowood phase in the Upper Ohio basin of western Pennsylvania is largely confined to the Upper Allegheny Valley and is poorly known. Other tools found at the habitation sites include scrapers, seed grinding stones, nutting stones, anvil stones, triangular end scrapers, Vinette 1 pottery and or exterior cordmarked/interior smooth wares. However, in all cases, Meadowood occupations seem to be small in area and in numbers of artifacts. 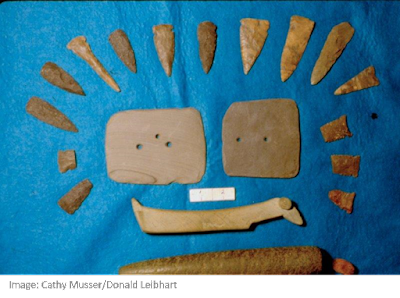 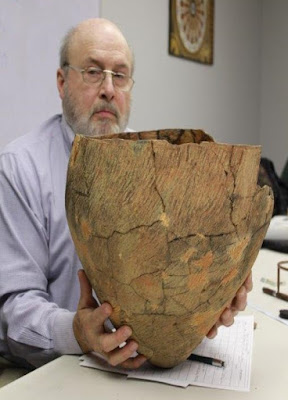 So, there seems to be a scattering of fewer than 200 habitation sites in Pennsylvania, but the Meadowood phase is best known for its exotic and cremation burials. Cemeteries are found in New York, but few if any multiple grave sites have been found in Pennsylvania. Kraft (2001: 166) reports a Meadowood cremation burial from Fairfield, New Jersey that dated to 2980+130 BP., but no Meadowood burial sites have been reported from the Pennsylvania side of the Delaware. However, in the Susquehanna basin, at least six Meadowood caches have been identified. The Ferry site (36Pe10) in the lower Susquehanna basin, produced a cache of 20 Meadowood bifaces and a second cache 70 meters from the first, containing over 250 cache bifaces, steatite beads, a strike-a-lite, copper beads, a group of stemmed and side notched points, two of which could be Hellgrammite points and cremated human remains (Gramly and Kunkle 2003).  The Oscar Leibhart (36Yo9) cache included a group of eight or nine Meadowood bifaces, two large gorgets, one with two holes and one with three holes, a tubular pipe, a popeyed birdstone, and metarhyolite bifaces possibly Hellgrammites (Carr and Mayhew 2017; Kent 2001: 368; Kinsey 1957). Stewart (2003: 12) reports Meadowood points from a possible cremation burial that included red ochre and a “killed” Hellgrammite point from the Canfield Island site (36Ly37) on the West Branch (Bressler 1989: 78; Bressler et al. 1983: 51). A boatstone and a portion of a fireclay tube were also found. The Cremard site (36Lu58) on the North Branch produced a possible cremation burial associated with a blocked end tubular pipe, an incised celt/gorget, a boatstone, a metallic material, possibly galena and a date of 2520+50 BP. (Orlandini 2008).
At least in the Middle Delaware, and the Lower Susquehanna basins, Meadowood points seem to be contemporary with Hellgrammite points (Hummer 2003: 46). At the Williamson site along the Delaware river in New Jersey, Hummer dates them to 2900 BP. Hellgrammite points also have small side-notches, but they are made from local lithic materials rather than Onondaga chert. In addition, they are usually thicker, not well flaked and more frequently seriated. In the Middle Delaware Valley, the Hellgrammite type, is predominantly made of argillite (64%), followed by jasper at 18% (Hummer 2003). In the Lower Susquehanna Valley, they are predominantly metarhyolite. It should be noted that Hellgrammite points found in Meadowood burials suggests that they are contemporary with one another and that the Meadowood points are part of a trade and exchange system while the Hellgrammites are being made of local lithic materials and represent the local group. 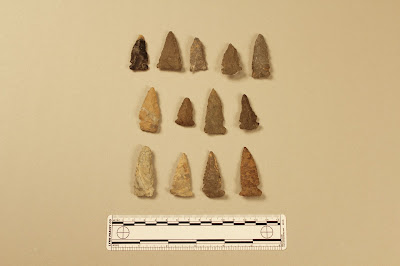 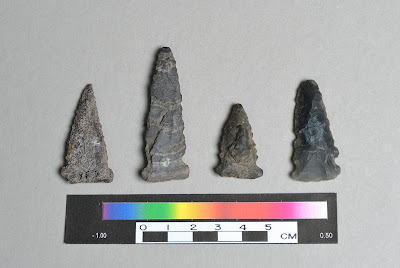 Initially, Meadowood points were treated in a similar manner as other projectile point types implying that they were the projectile point used by a specific group of people along with other tools, pottery that included Vinette 1 and exterior cordmarked/interior smooth wares. These defined the Meadowood culture or Meadowood phase (Kraft 2001: 160). Ritchie (1969: 181-183) states that “Meadowood people pursued a fishing, hunting and presumably gathering subsistence pattern” similar to Late Archaic and Transitional times, but the “small cemeteries and storage pits point toward a more stable pattern of living”.

However, Custer (1996: 242) notes that “Meadowood materials are isolated occurrences of exotic materials that are overlain on local Early Woodland cultures.” Kinsey (1972: 362) also implies that Meadowood did not have an effect on cultural evolution in the Upper Delaware and that it came from central New York by way of a travel/trade process. It seems as if Meadowood was grafted on to local Early Woodland cultural groups. Considering the way archaeologists name cultures and phases, in the Middle Delaware and Susquehanna basins, it may be more appropriate to identify this as the Hellgrammite phase or culture.

Recently, Karine Tache summarized Meadowood sites over a broad area and defined the Meadowood Interaction Sphere (Tache 2011). She identified Meadowood sites that shared the same artifact assemblages extending from the eastern Great Lakes through Ontario and New England and into the Middle Atlantic region. Sites throughout this region were connected by a trade system involving Onondaga chert and a common belief system. It seems to include several different regional archaeological constructs that seemingly represent different “cultures”. The regional size of this shared belief system and the level of interaction is unprecedented in the Middle Atlantic region compared to previous times. 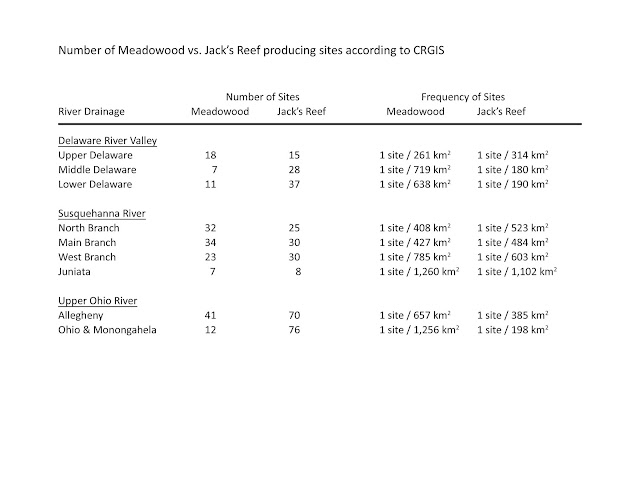 As characterized by Tache (2011: 72), the Meadowood Interaction Sphere consists of a directional trading model involving Onondaga chert bifaces, native copper, banded slate gorgets, birdstones, tubular pipes, and marine shell artifacts. Custer (1996) suggests that the exotic items are controlled by important men dealing with long distance trade resulting in enhanced social status. Tache (2011: 42-43) characterizes the Onondaga chert bifaces as a commodity made by specialists. Long known for its high-quality flaking characteristics, the material may have acquired sociopolitical significance that was used to obtain exotic items that enhanced the power and prestige of individuals or kin based groups. She (2011: 71) also suggests that there were degrees of participation by local groups, some being more involved in the trade and exchange of Meadowood bifaces than others. In addition, Tache (2011: 72) notes the differential quantity and quality of grave goods in burials “suggesting the emergence of social inequalities”.

Typically, the only social distinctions thought to exist in Early Woodland groups are headman and shaman and these could have been held by either males or females. However, during the Meadowood/Hellgrammite phase, some groups were participating in the Meadowood Interaction Sphere. This means that some individuals were involved with the trade and exchange of these exotic items and achieved greater status. These are probably the individuals in the cremation burials. However, it is significant that the items in the burials are generally the same – a cache of Meadowood bifaces, a gorget, a tubular object, a boat stone, a few bifaces in local lithic material and red ochre. Therefore, it is likely that Early Woodland social organization was more complex than during Late Archaic, but not greatly so. How this was operationalized in the local egalitarian bands of Pennsylvania has not been specifically determined, but is very interesting to contemplate.

We hope you’ve enjoyed this insightful look at the past by way of an artifact.  We often remind our followers that understanding the past is not about a single artifact; it is what we learn from patterning the past and looking at “the big picture”.  These changes in the Early Woodland period are an interesting reflection of the changing cultural adaptation of this little-known time.

Carr, Kurt W. and Melanie Mayhew
2017    Auctioning the Past: Attempts to Preserve the Archaeological Record of the Donald
Leibhart Collection (36Yo9). Presented at the Annual Meeting of the Society for
Pennsylvania Archaeology, April 9, Harrisburg.

Hummer, Chris C.
2003    Hellgrammite Points and the Early Woodland in New Jersey. Bulletin of the
Archaeological Society of New Jersey 58: 45-48.

1972    Archeology in the Upper Delaware Valley:  A Study of the Cultural Chronology of the
Tocks Island Reservoir. Anthropological Series Number 2, Commonwealth of
Pennsylvania, The Pennsylvania Historical and Museum Commission, Harrisburg.

Turnbaugh, William
1977    Man, Land, and Time.  Lycoming County Historical Society, Williamsport.
United States Department of Agriculture
.
For more information, visit PAarchaeology.state.pa.us or the Hall of Anthropology and Archaeology at The State Museum of Pennsylvania .
Posted by PA Archaeology at 4:45 PM