Here we are again; it is January and The State Museum of Pennsylvania is setting up our annual exhibit at the Pennsylvania Farm Show. This is our biggest public outreach program of the year and, according to the Farm Show web site, it is the “largest indoor agricultural exposition in the nation, with nearly 6,000 animals, 10,000 competitive exhibits and 300 commercial exhibits.”  Our goal is to engage the public in a discussion of the value of archaeology and to encourage visitation to the Hall of Anthropology and Archaeology at the State Museum. As in past years, the State Museum’s exhibit is set up in the Family Living section, located in the main exhibition hall of the Farm Show Agricultural Complex next to the MacClay Street Lobby across from the carousal. The 101st annual Pennsylvania Farm Show begins Saturday, January 7, 2017 and runs through Saturday, January 14. 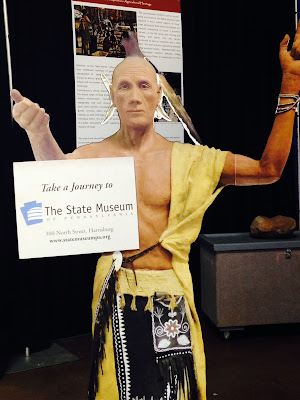 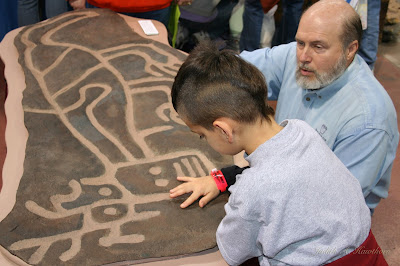 The resin cast is named “Missibezhieu” (Mish ee pa zu) or, the underwater panther.  This was a mythical creature found in Ojibwa stories.  It is part of the Parkers Landing petroglyph site located on the Allegheny River in Clarion County.

The other related handouts are a Heritage Magazine article about the making of the petroglyph banner and a connect the dots handout for children. Finally, we have a petroglyph rock art activity – Connecting with the Past -  where young children can trace images from the Little Indian Rock Petroglyph thereby creating their own petroglyph. 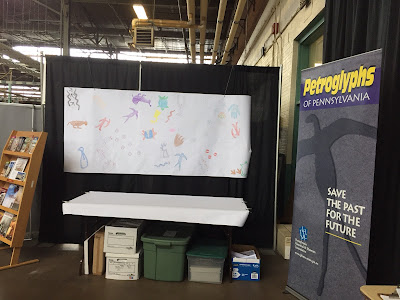 The banner is derived from a rubbing (http://twipa.blogspot.com/2009/03/schuylkill-county-petroglyph.html) by Paul Nevin of Little Indian Rock.  It took Paul two days to transpose the designs onto several large pieces of paper.  The rubbing was then digitized (http://www.phmc.state.pa.us/portal/communities/archaeology/native-american/little-indian-rock.html) by the Publications Division of the Pennsylvania Historical and Museum Commission (PHMC) under the direction of Ted Walke, former PHMC Publications Chief.  Now that this petroglyph is in an electronic format, it will significantly facilitate the analysis of these designs by researchers. 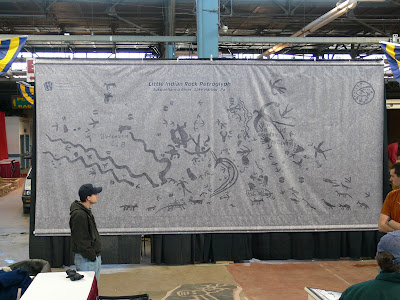 The exhibit is a cooperative endeavor by the Society for Pennsylvania Archaeology, Inc. (), the Pennsylvania Archaeological Council (PAC), and The State Museum of Pennsylvania.   Members of the SPA will be on hand offering information about the organization and answering questions. If you are interested in joining the SPA; new memberships include the biannual journal Pennsylvania Archaeologist, announcements of the annual SPA meeting, newsletters and a special Farm Show bonus of three previous issues of the journal will be included. So, stop on by and see what SPA is all about! 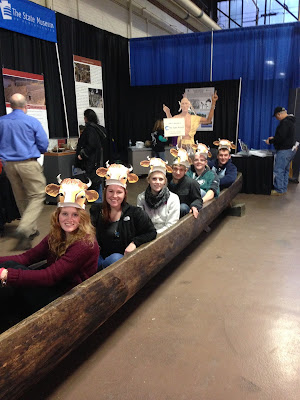 Finally, don’t forget that our 20-foot-long replica dugout canoe is also featured in the exhibit. Everyone is welcome to stop and test it out by climbing in and imagining how it would have been to live thousands of years ago, when this was one of the main modes of transportation. While taking a “ride” in the canoe you can read our poster and look at the photos about how dugout canoes were made and how the State Museum’s archaeologists and volunteers made the exact canoe you are sitting in through traditional methods with traditional stone tools. While you are at it, get a picture of the family in the dugout. 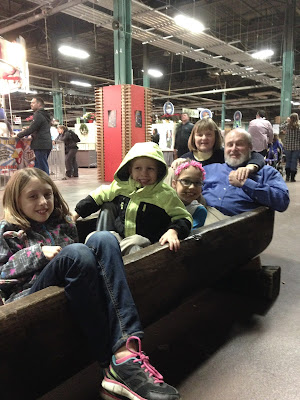 Visit our exhibit at the Farm Show; learn about Pennsylvania archaeology and have fun with the family.

For more information, visit PAarchaeology.state.pa.us or the Hall of Anthropology and Archaeology at The State Museum of Pennsylvania .
Posted by PA Archaeology at 2:45 PM