In the Yards and Under the Porch: Fort Hunter 2016 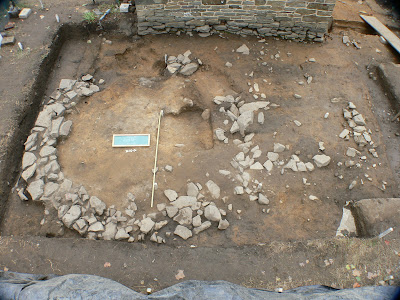 This year’s archaeological excavations at Fort Hunter Mansion and Park yielded some fascinating and unusual discoveries. The archaeology continues around the foundation of Archibald McAllister’s octagon-shaped building known as the “smokery” (Cooper 1790).  Attached on the north end of this building, we have identified a rectangular-shaped foundation that, according to documents, likely housed a wood stove to generate the smoke through a tube to the octagon smoke house. 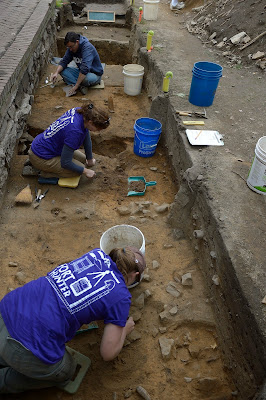 In the yard east of the mansion unanticipated discoveries were made. This area is identified as the porch trench is actually an expansion of last year’s trench. There, a compressed B-horizon soil 4500 to 700 years old (Late Archaic to Late Woodland periods) was encountered containing  artifacts.  Overlying these intact cultural deposits are soils containing 19th century and early 20th century artifacts, though some dated earlier, to the 18th century “fort occupation”. 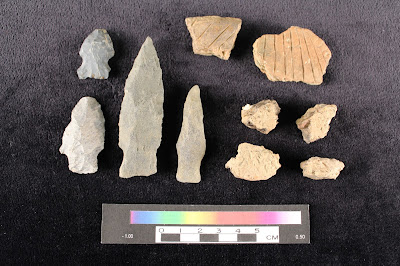 The mansion’s high terrace setting must have been a desirable camping location for early Indians passing through the Susquehanna valley as is demonstrated by the many fire altered cobble features that we have encountered. Over the years, these features have been found at different locations around the mansion complex and they are always associated with the B-horizon soils underlying the site’s much altered land surface. Other features of this type must have existed in the upper-most soil horizons but were destroyed by the first plowings when the land was cleared and cultivated for domestic use.

This year two prehistoric cobble hearth features were excavated. The first one, though partially destroyed by a water main to the mansion, contained fire cracked and reddened rocks that may have been heated in place since traces of charcoal and soot staining was observed around and beneath some of the cobbles. A second though completely intact cobble feature was found at the south end of the trench. Charcoal was also present though widely scattered and difficult to recover. The porch trench also revealed large, round to square shaped postmolds paralleling  the mansion’s central section suggest that both of these prehistoric features were hidden in historic times by a roofed porch supported by three or more vertically emplaced posts. 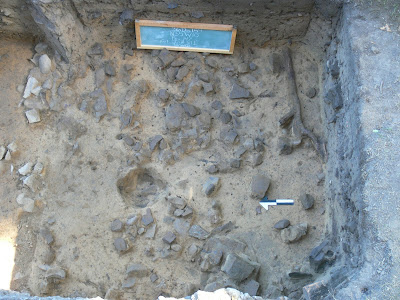 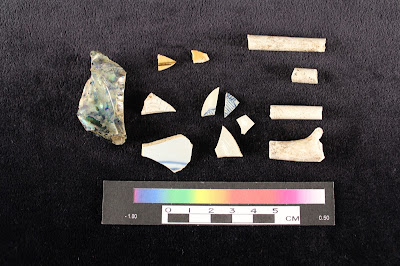 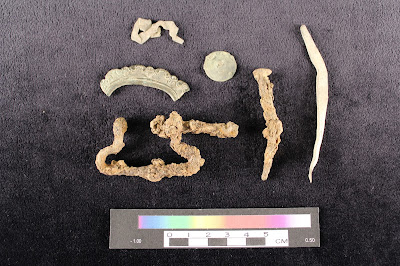 In late September, PHMC staff and volunteers opened a five by fifteen foot trench in the yard north of the mansion where previous test trenching in 2008 revealed evidence of a sealed mid-18th century period occupation located 2 feet below a series of recent fill deposits. The efforts were, indeed, rewarding for within the trench was found a fire reddened ashy and charcoal stained deposit of paved cobbled with a midden composed of the butchered bones of beef, pig and an assortment of other mammals comingled with a few fish bones, broken window and bottle glass, iron nails and glazed ceramics clearly linked to on-site architectural/subsistence related activities. The presence of these objects strongly suggest that we are in the general area of a large domestic mid-18th century occupation, perhaps the very one linked to Samuel Hunter’s blockhouse mentioned in Clarence Busch’s Frontier Fort of Pennsylvania (1896). 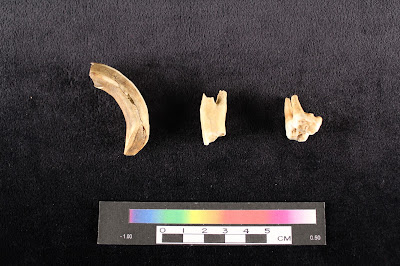 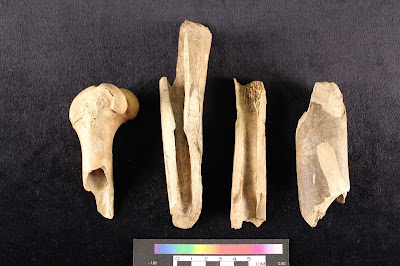 Next year presents yet another opportunity for us to experience the fascination and discovery of the archaeology at Fort Hunter – and the mystery continues. . . . . . .

For more information, visit PAarchaeology.state.pa.us or the Hall of Anthropology and Archaeology at The State Museum of Pennsylvania .
Posted by PA Archaeology at 3:24 PM