We are continuing our celebration of the 50th anniversary of the opening of The State Museum of Pennsylvania.  This week will take us back a little beyond that 50 year window in an effort to set the stage for one of the most spectacular sites to be excavated in central Pennsylvania. 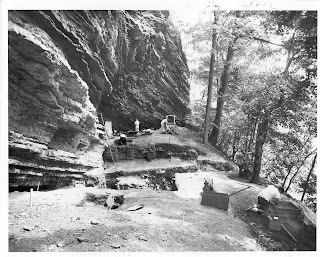 In 1957, John E. Miller of Altoona, Pennsylvania was the guest of John Folk, also from Altoona, on a boat trip down the Raystown Branch of the Juniata River.  They enjoyed a conversation about the surrounding landscape mentioning that it was well suited for rock shelters.  Miller learned that there was such a place and upon visiting it that day dug a test pit toward the back wall of the shelter.  He quickly began recovering pottery, animal bones, mussel shells, charcoal and a stone hoe.  The following year he revisited the site with some other friends and dug a subsequent pit revealing many organic artifacts; corncobs, cornhusks, cornstalks, cordage and more.


This is what makes Sheep Rock Shelter (36Hu1), as it came to be named, such a spectacular site.  It was a dry rock overhang enabling the preservation of organic material, something almost never found in the wet, humid climate of Pennsylvania.

Archaeologist studying prehistory in Northeastern North America often speculate that the variety of stone tools we most often associate with prehistoric people actually represents only about 10% of their material culture.  The other 90% would have been made out of perishable or organic materials; and therefor lost to the ravages of time and decomposition.  Sheep Rock Shelter represents a small, local window into that rarely seen part of everyday prehistoric life.

Fortunately, these men realized the rarity of uncovering artifacts such as these; and that they needed professional guidance.  Miller entrusted his brother-in-law and co-excavator Melville Corl to take samples of the artifacts to a meeting of The Society of Pennsylvania Archaeology where he shared them with John Witthoft, the State Anthropologist with the Pennsylvania State Museum (currently The State Museum of Pennsylvania).

The first order of business was to find the landowner of the rock shelter, which proved to be more difficult than expected.  Permission was eventually granted and on July 14, 1958 the first systematic excavations commenced.  It was Melville Corl, E. J. Stackhouse, Raymond Zeak and Tommy Lukehart who were contributing to the original excavations.  Trudging through the woods with equipment and then boating the final leg to begin digging at the site.

John Witthoft arrived on July 21 to inspect and participate in the dig.  Due to the volume and unique nature of the artifacts recovered, the threat of looting and the difficult logistics accessing the site, it was decided to turn the site over to the Pennsylvania State Museum.  In 1959, John Witthoft, the State Anthropologist and Fred Kinsey III, the State Archaeologist took responsibility, on behalf of the museum, for any future excavations at the site.

In the summer of 1959 Fred Kinsey excavated at Sheep rock with a crew of students, as a field school through the Pennsylvania State University.  The same arrangement continued for the following three years under the direction of John Witthoft.  During those years of excavation they dug to a depth of more than twenty feet within the shelter and produced an estimated 80,000 artifacts. 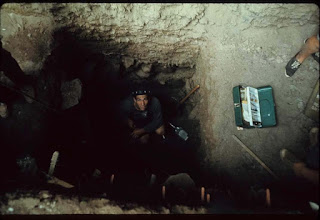 They were also producing some very well trained archaeologists that continued a legacy of scientific excavation and publication in Pennsylvania archaeology.  Through these efforts the basis for our understanding of the occupation and geologic sequence of the region was formed. 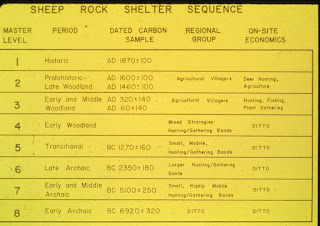 There were no excavations the following two years until 1965 when Ira Smith, a former Sheep Rock field school student and later the State Field Archaeologist for the William Penn Museum (currently The State Museum of Pennsylvania), conducted a survey of the area.  Plans had been made by the Army Corp of Engineers to build a dam which would flood the Raystown Branch of the Juniata River, covering Sheep Rock Shelter with more than one hundred feet of water.  Smith’s survey was responsible for finding 35 additional sites that would have been lost. Excavations, especially in the Archaic levels, of the shelter resumed.

Excavations continued the following year, again as a field school but this time as a joined effort of the Pennsylvania State University and Juniata College under the direction of Joe Michaels and Ira Smith.

Sheep Rock Shelter remains one of the most amazing sites excavated in Pennsylvania.  It harbored some of the most unique artifacts of everyday prehistoric life for thousands of years.  Keeping them dry and preserved as a result of its unique geological conditions.  Although the real site is inaccessible now in the depths of Raystown Lake you can get a sense of what it was like by visiting the Anthropology/Archaeology gallery at The State Museum of Pennsylvania.  Exhibited just to the left of the open excavation you can see what the shelter was like.  The back wall of the exhibit was created from a mold of the actual back wall of the shelter.  Also exhibited in the Technology area of the gallery are the bark basket, fabric, cordage, netting, canoe paddle, and fire making kit all recovered from this remarkable site.

Please feel free to search through our past blogs for more information about Sheep Rock Shelter, or see the following sources used in this week’s editions of TWIPA.

For more information, visit PAarchaeology.state.pa.us or the Hall of Anthropology and Archaeology at The State Museum of Pennsylvania .
Posted by PA Archaeology at 4:27 PM