This week, we continue our celebration of the 50th anniversary of the opening of The State Museum of Pennsylvania in 1965. In the mid-1960’s, much of the research conducted by the State Museum was focused on the Susquehanna River basin and especially the Lower Susquehanna basin. Several power companies were planning construction projects and knowing of the significant archaeological sites in the region, they contacted the State Archaeologist. One such project was Metropolitan Edison’s construction of the Three Mile Island Nuclear Complex consisting of several large cooling towers and associated buildings, roads and parking areas. With funding from Metropolitan Edison, the State Museum’s Section of Archaeology conducted a survey of the island to identify and examine archaeological sites threatened by construction of the proposed facility. After years of agricultural dormancy, much of the island was overgrown with dense vegetation making surface conditions difficult for the archaeologists to study. The island had also suffered from years of erosion resulting in a mixing of archaeological sediments. Coal silt and sterile soil covered much of the island making discovery of artifacts nearly impossible. However, after a difficult survey, the upper part of the island was determined to have the best potential for the preservation of undisturbed information on the prehistoric occupation of the island. This was identified as the Three Mile Island site (36DA50).

After clearing flood debris and tangled vegetation, museum staff and a small contingent of college students mapped the intact surface of the site: thereby establishing a datum point, grid pattern and a series of excavation units. Forty-nine 5 by 5 foot squares forming three principal excavations were selected for study and explored for archaeological remains. Two sections of the cleared area designated as A-D were selected for study, both of which yielded prehistoric ceramics, stone tools and related stone debitage situated in two feet of culturally stratified alluvial sediment. Although coarse by todays standards, the excavations were conducted in arbitrary 6 inch levels. 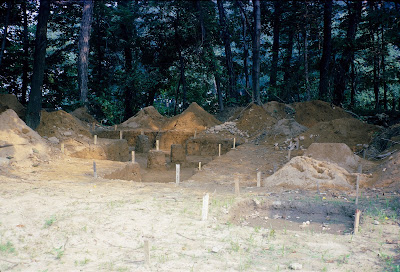 The results document one of the few, Early and Middle Woodland occupations excavated in the Lower Susquehanna basin. In terms of the regional prehistoric cultural record,  this section of the Susquehanna Valley appears to be related to the Middle Atlantic Seaboard Culture Sequence (Stephenson 1963). As such, the prehistoric pottery from Three Mile Island includes many of the types found in the Coastal Plain and Piedmont Provinces located south of Harrisburg, Pennsylvania. Ira Smith (1977), however, identified a number of new ceramic types. Most of these were associated with the local Early and Middle Woodland occupations whose pottery was useful in defining the local sequence on the basis of temper, surface treatment and form. Unfortunately, no sites in the immediate area of Three Mile Island have provided such information so reliance must weigh with comparisons found in other regions of the Middle Atlantic where the chronology is better documented (www.jefpat.org/diagnostic/Prehistoric Ceramics/index-prehistoric.html.) 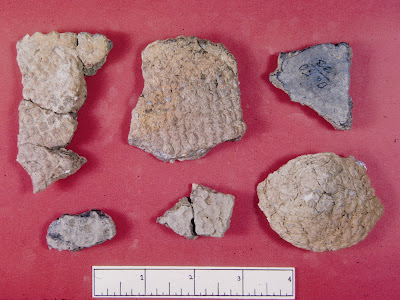 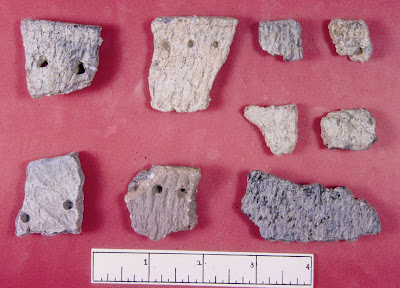 The stone tool assemblages, specifically projectile points, associated with the ceramic levels at 36DA50 broadly mirrored typologies of the Middle Atlantic region. Vernon-like points seem to have a broad spread from Early to Middle Woodland since they occur with early Marcey Creek wares as well as Popes Creek and other Accokeek Creek site ceramics. Calvert-like points are known to occur in Late Archaic contexts, however, they have also been found in Early Woodland Marcey Creek contexts at such sites as the Marcey Creek and Seldon Island sites located in the Potomac River valley. 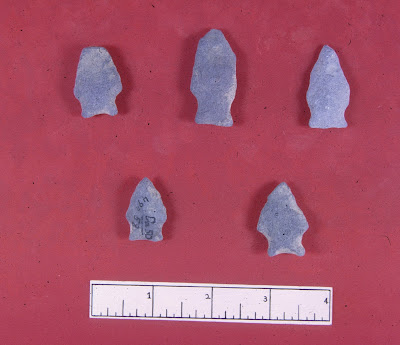 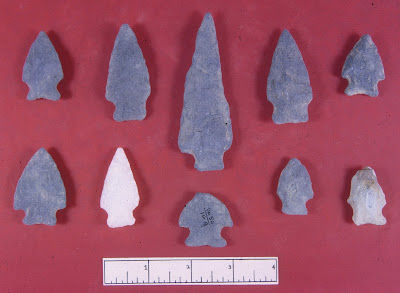 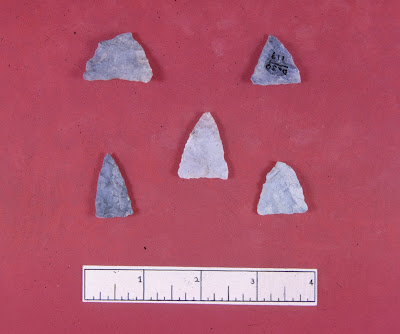 Although the lithic material was typically quartz, argillite and metarhyolite, excavations produced a jasper tool cache consisting of 248 worked flakes removed from six cores.  They show considerable trimming or nibbling along flake edges and other flakes exhibit “utilization scarring” on one or more of their edges. Many also are well-worn and dulled from use from cutting things apart. Based on the pattern of edge wear there flake tools were used on ………. “hard but elastic surfaces such as bone or wood” (Smith 1970). In general terms the flakes display triangular and trapezoidal cross sections. Equally interesting were the high grade stone tools classified as end and side scrapers with steep edged working areas. A few of these exhibited small spurs indicative of graver tools found on scrapers of the Paleoindian period. 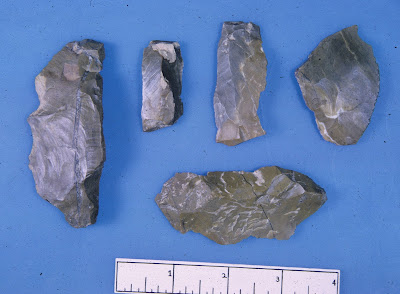 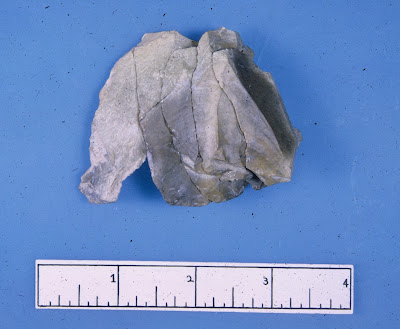 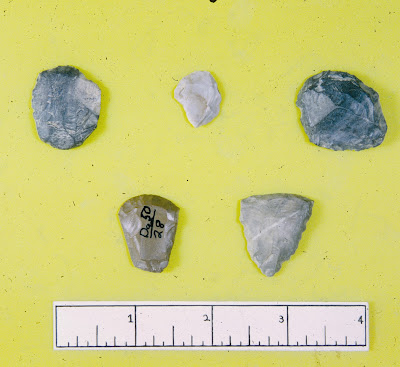 In sum, 36DA50 served as a camp site during Late Archaic through early Late Woodland times. Although no dietary remains were recovered, it is assumed Native Americans were exploiting wild plants, and animals in a riverine setting. Based on a few other sites from this period, it is also probable that they were beginning the process of plant domestication. The Three Mile Island site is significant because it represents one of the few windows into this time period of just prior to full plant domestication and the dependence farming as a way of life.


We hope you have enjoyed this summary of the archaeology of Three Mile Island and please join us again for more fascinating topics from the Section of Archaeology, The State Museum of Pennsylvania.

For more information, visit PAarchaeology.state.pa.us or the Hall of Anthropology and Archaeology at The State Museum of Pennsylvania .
Posted by PA Archaeology at 4:54 PM