Back on the alphabetical trail this week through Pennsylvania Archaeology and we arrive at the letter “J”. With options like jasper and Jack’s Reef points discussed in earlier posts, “J” becomes a bit more difficult to find a match for.  Revisiting Jefferson County might not be the most creative solution but it does provide an opportunity to look at a recent cultural resources management project or CRM. Cultural Resource Management is a review process that aids in the protection and management of our cultural heritage under state and federal guidelines. This may include archaeological resources, but also addresses historic buildings. Cultural resources are finite and non-renewable resources that once destroyed cannot be returned to their original state. 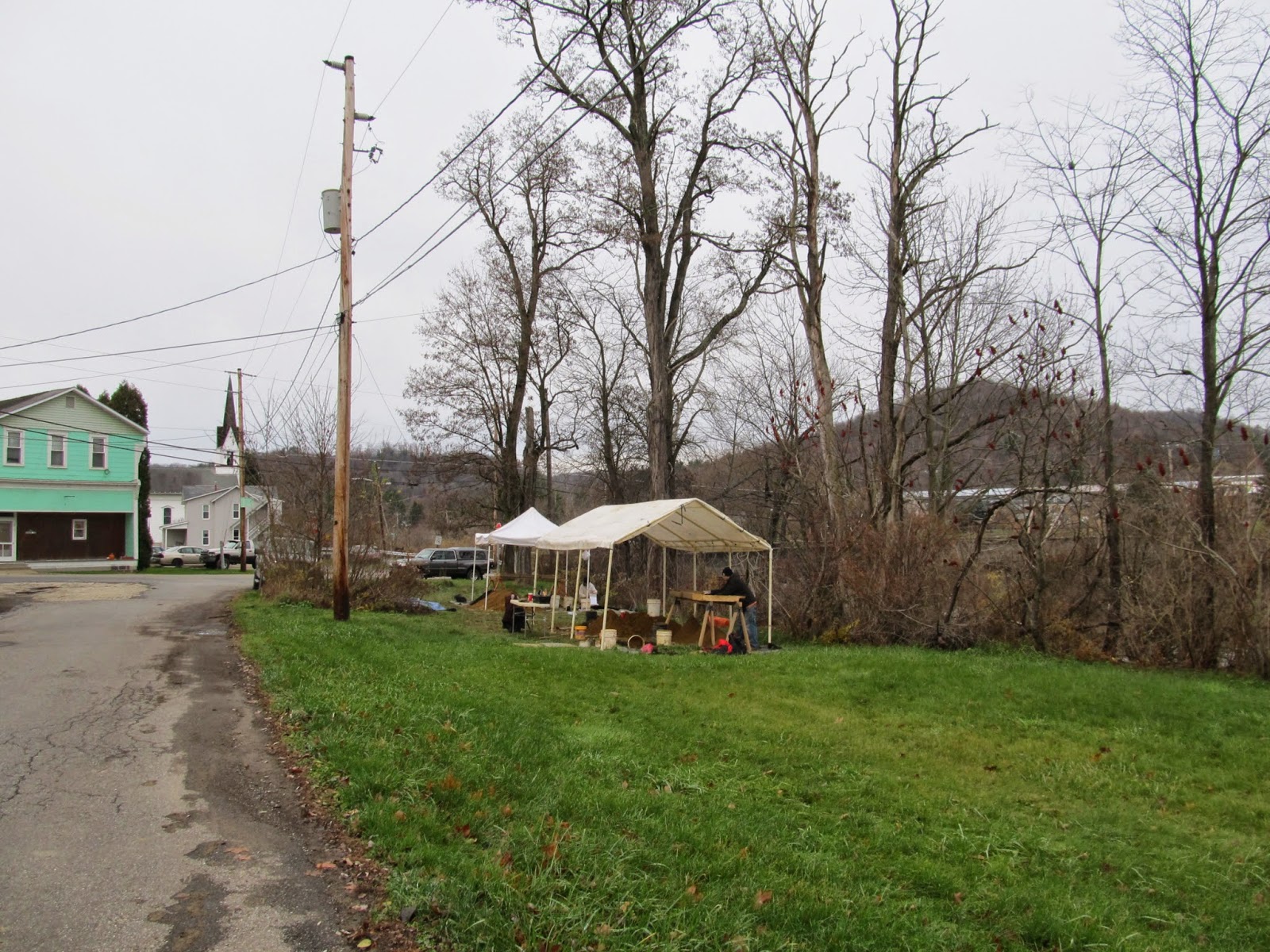 Jefferson County is home to Summerville, a small village situated along the northern and southern banks of Redbank Creek, a meandering tributary that forms the border between neighboring Clarion and Armstrong Counties and eventually meets the Allegheny River further west. 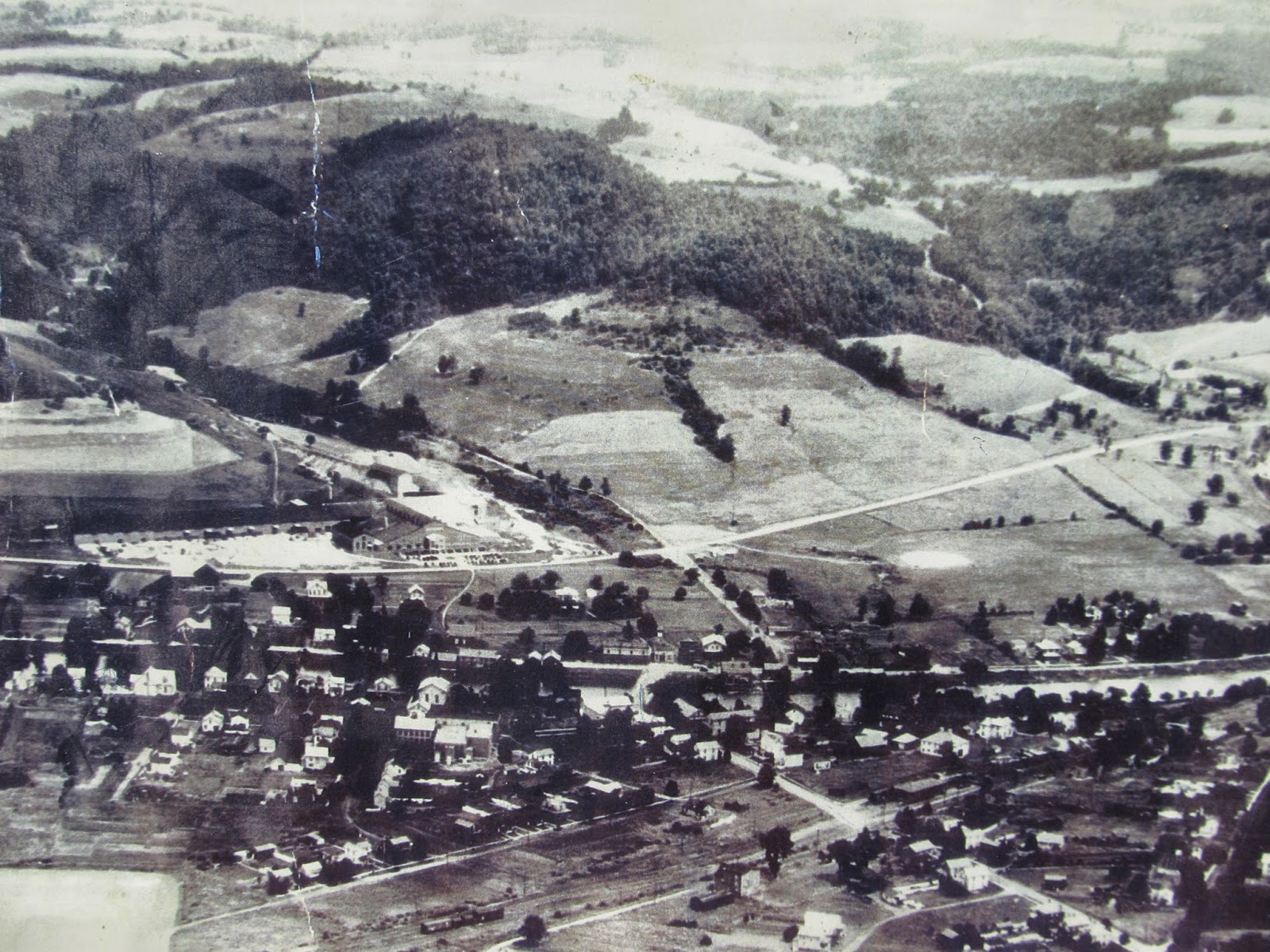 Historic aerial photo of Summerville, bridge is slightly below the center of photo, Redbank Creek flowing right to left

As seen in the historic aerial photo above, Summerville’s only bridge linking the northern and southern sections of town spans the creek at a perpendicular angle. PennDoT proposes to replace the bridge, “on a new alignment skewed across the creek . . . in order to improve the horizontal and vertical geometry and eliminate two 90 degree turns to the north of the existing bridge.”(Raber, Heberling and Vento 2012)

Due to receiving federal funds, PennDoT undertakings are required, among other things, to make a good faith effort in identifying cultural resources, evaluating their significance, and if necessary, mitigate any adverse effects their projects may have on important archaeological sites. In 2011, Heberling Associates, Inc. was contracted by PennDoT to conduct a phase I archaeological survey of the bridge replacement project’s area of potential effect, or APE. 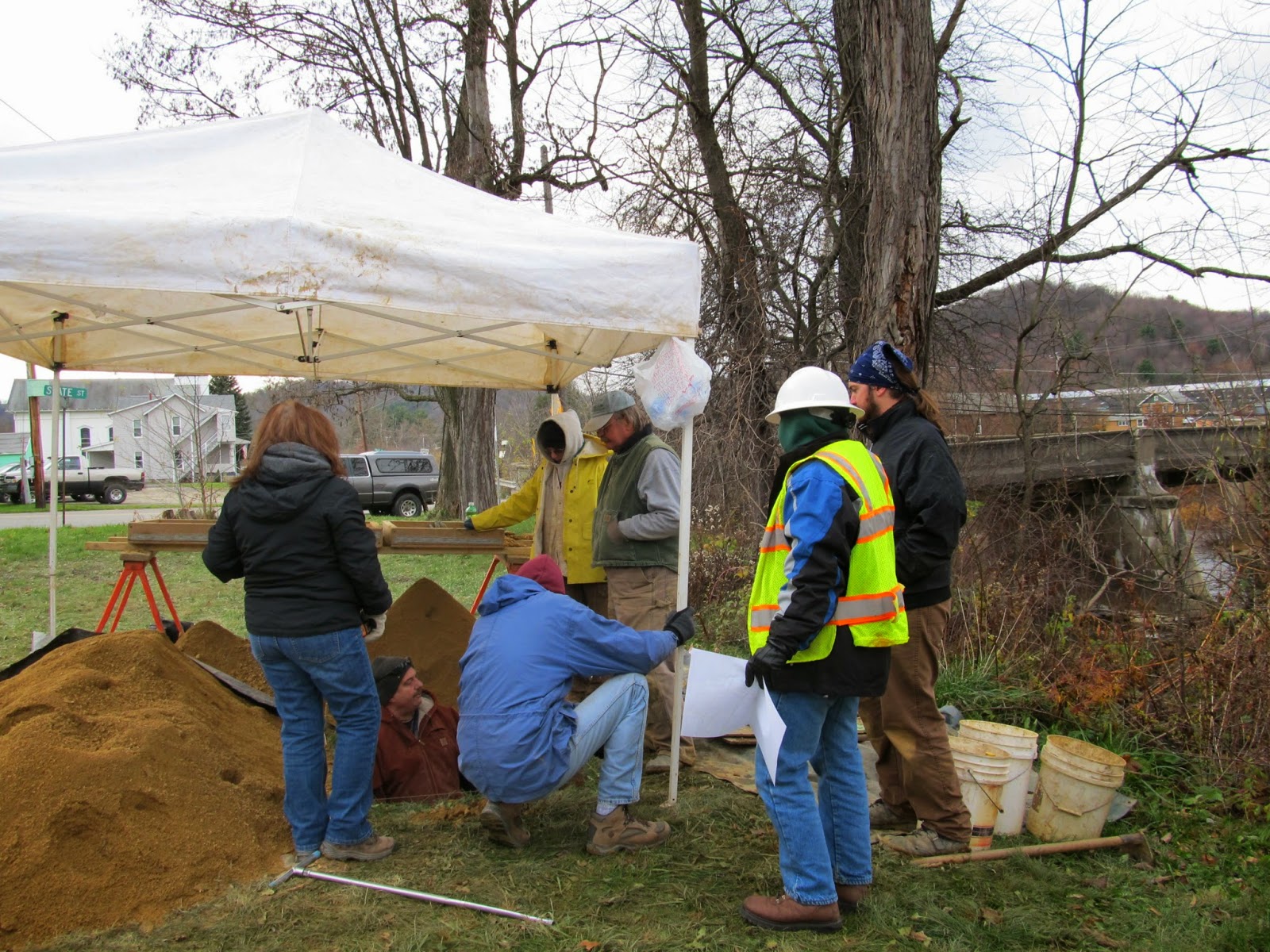 field crew huddles around the geomorphologist in a test unit, bridge visible in background

Referencing the Bureau for Historic Preservation’s Cultural Resource Geographic Information System (CRGIS), no fewer than eight previously recorded archaeological sites have been identified in the vicinity of Summerville, suggesting a high probability of a site within the project area. Directly abutting the existing bridge a steep slope, recent erosional activity of Redbank Creek and modern demolition work eliminated the need for subsurface testing in three of the four quadrants of the project area. However, in the southeast quad geomorphological analysis indicated the potential for intact cultural remains in Holocene age soils. 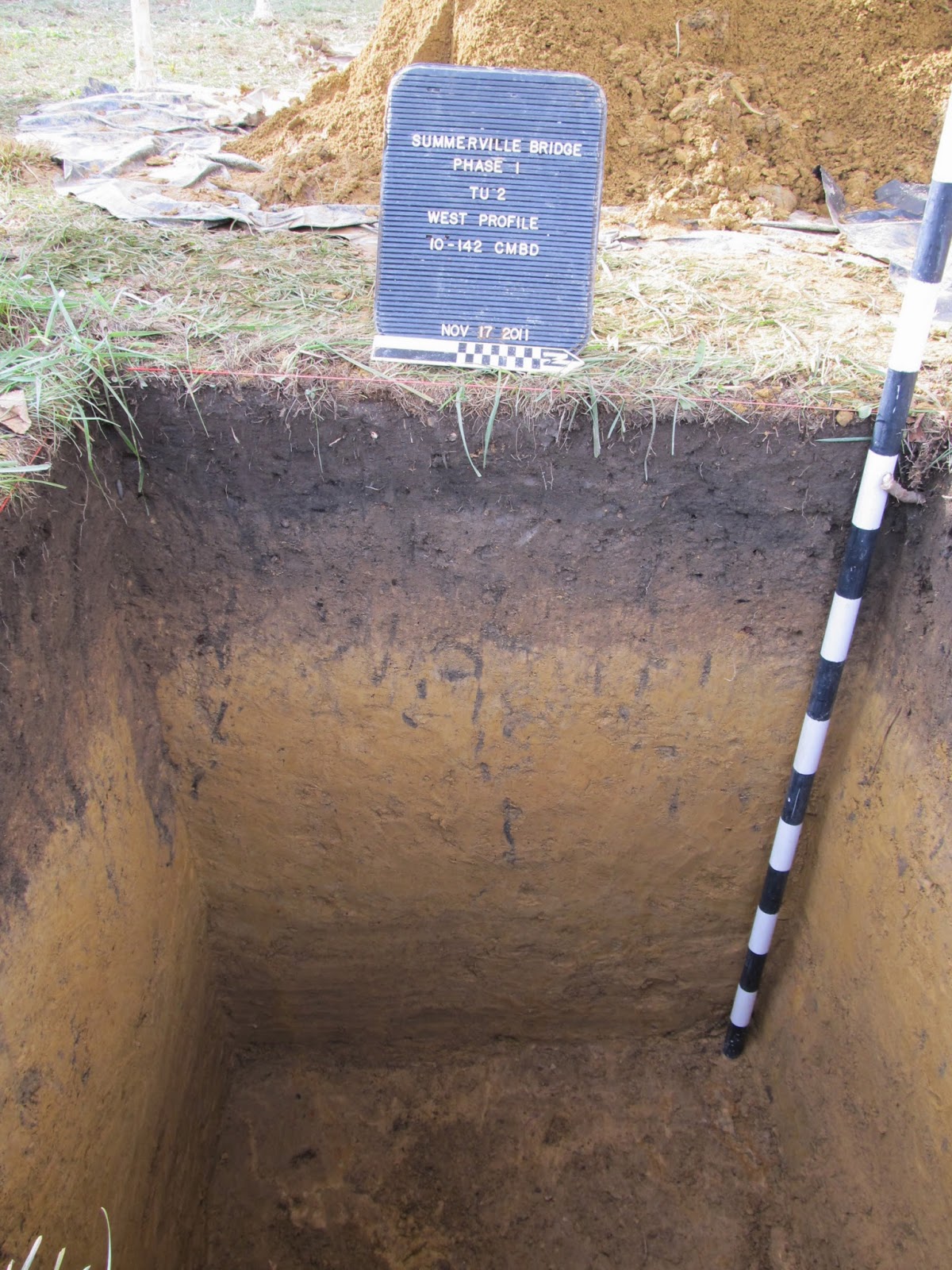 Four 1 x 1 meter test units in the southeast quad of the project area were hand excavated to sterile soils. Thirteen pieces of Onondaga and Upper Mercer chert debitage were recovered from A horizon (topsoil) contexts across each of the four units, one of which exhibits slight utilization wear on opposite margins. No other prehistoric tools were found and none of the lithics could be assigned to a particular time period. 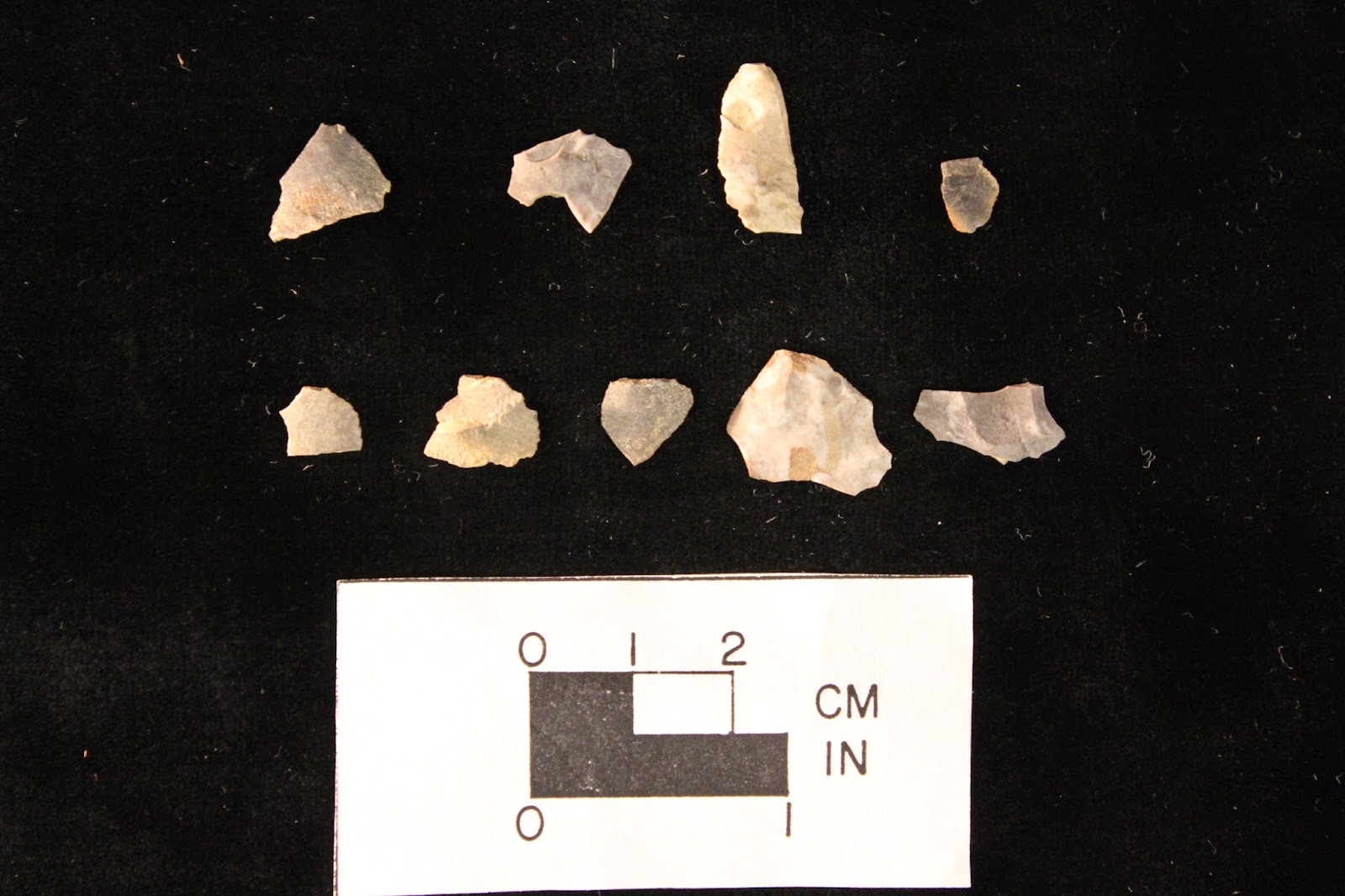 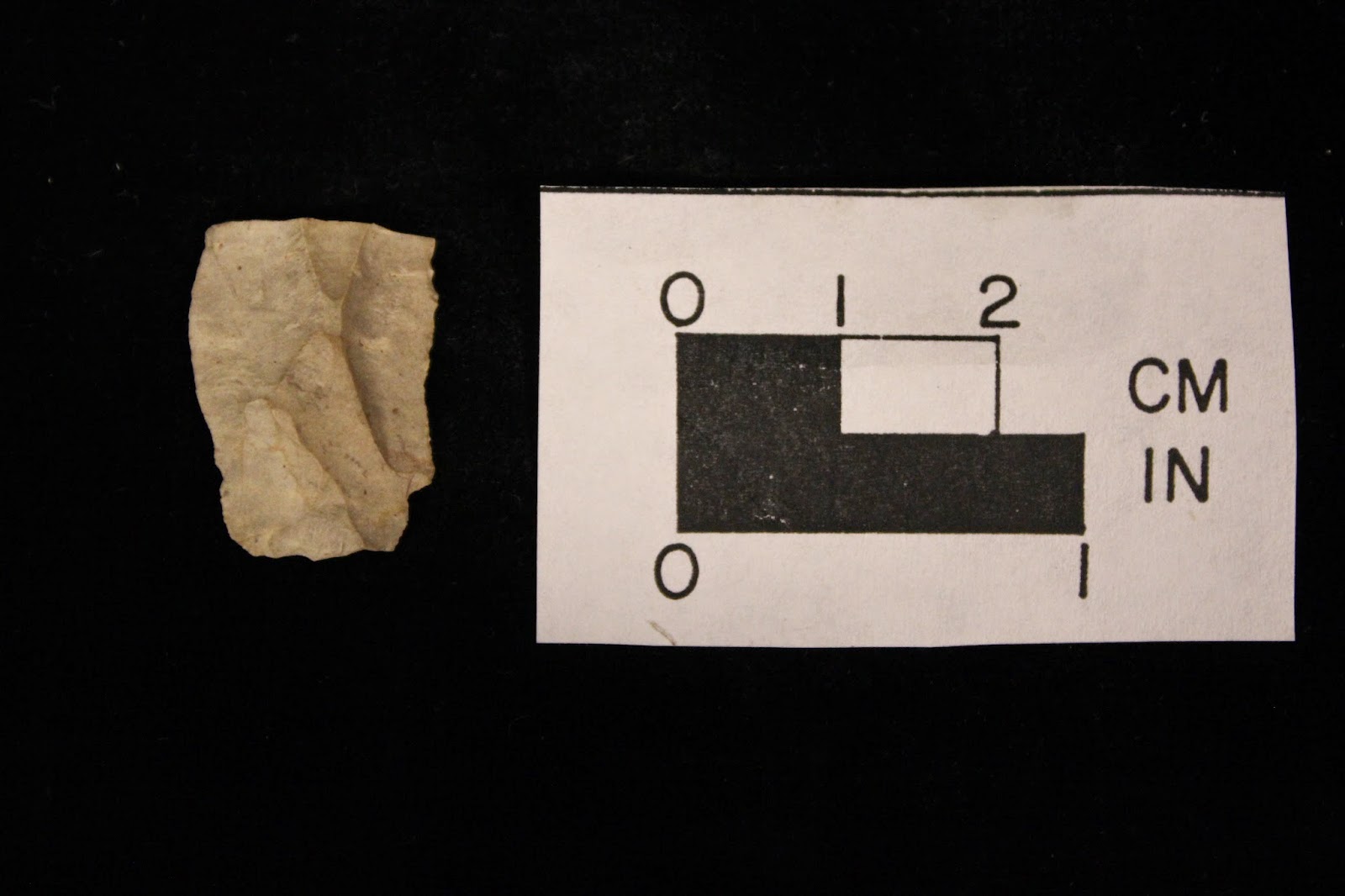 utilized flake from 36Je178, showing minor use wear on left and right margins

Several dozen historic artifacts were also recovered including earthenware and stoneware ceramics, vessel glass, a kaolin pipe stem fragment, and miscellaneous architectural materials. Two heavily corroded U.S. one cent pieces were found in stratum 2 of Unit 3. Although the obverse of both are so worn the dates are obliterated, enough of the reverse remains to identify one as a “wheat” penny, produced from 1909-1958, and the other as an “Indian Head” penny, minted from 1858-1909 (Yeoman 2001). 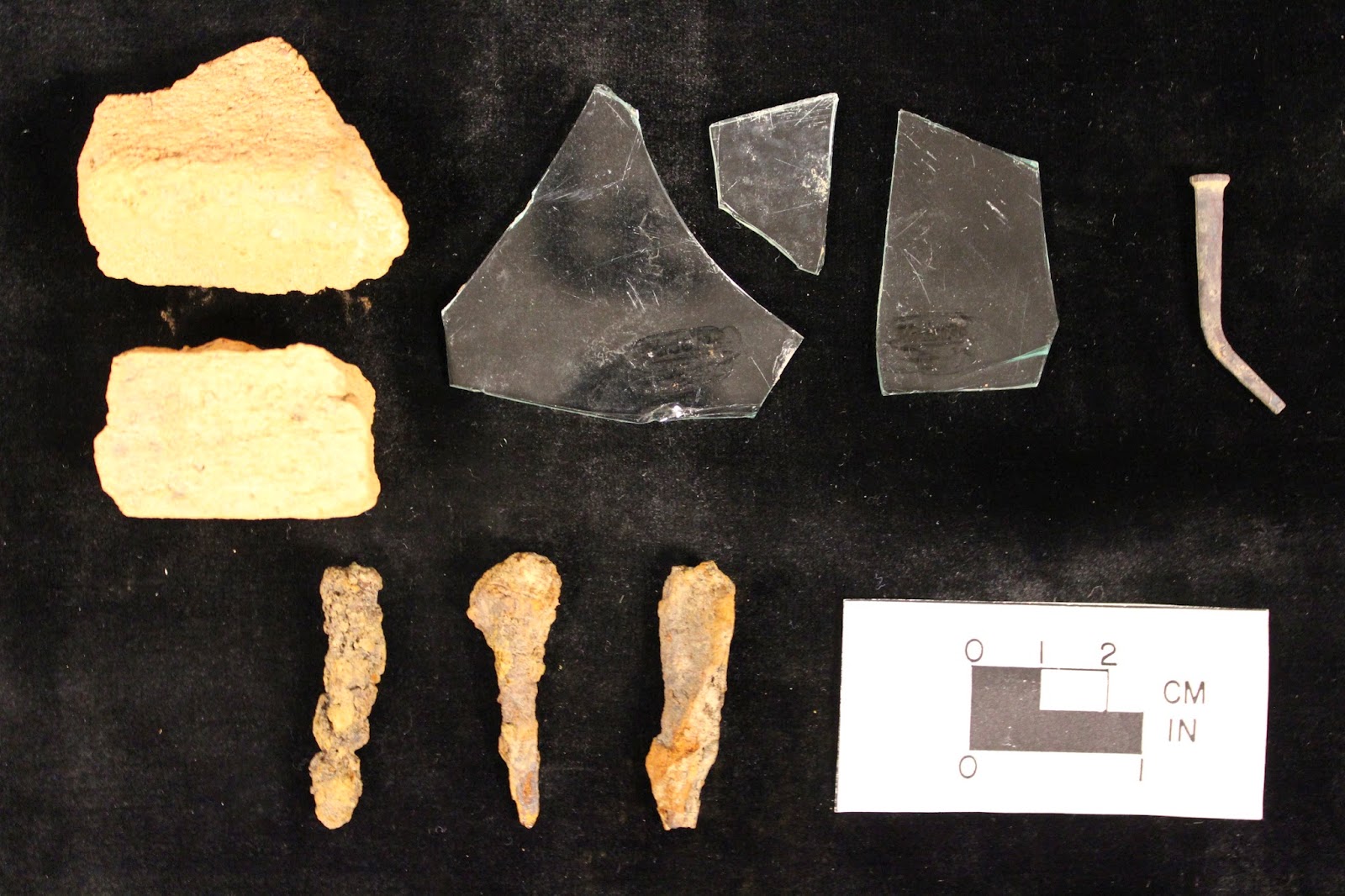 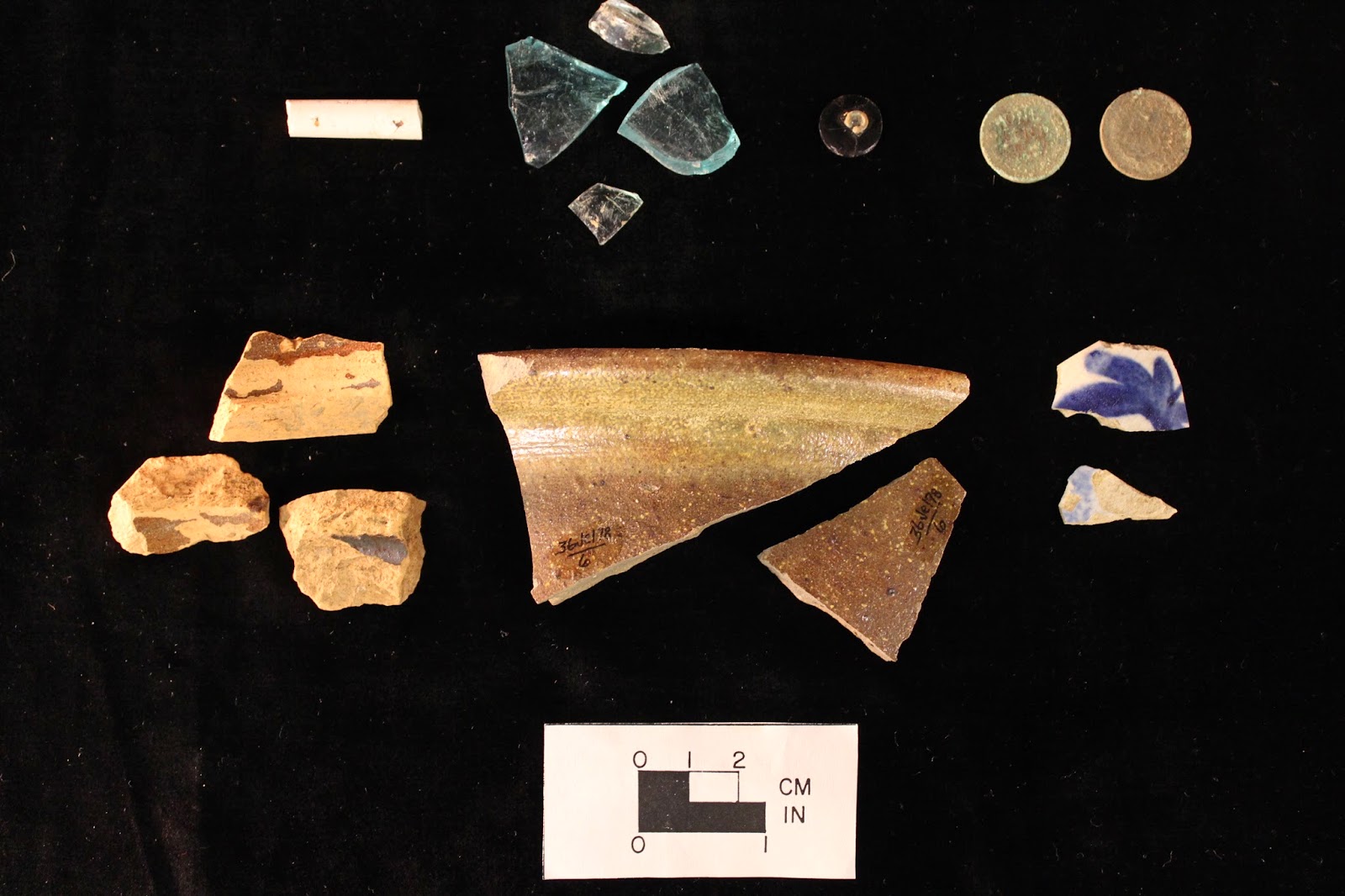 The cultural review process requires resources to meet certain criteria http://www.nps.gov/nr/publications/bulletins/nrb15/nrb15_2.htm  in order to meet eligibility standards.  The light density and non-diagnostic nature of the prehistoric finds, and the historic artifacts’ lack of spacial integrity or association to important people or events, renders the Summerville Bridge site (36Je178) not eligible to the National Register of Historic Places, and no additional archaeological testing has been recommended prior to the construction of the new bridge. 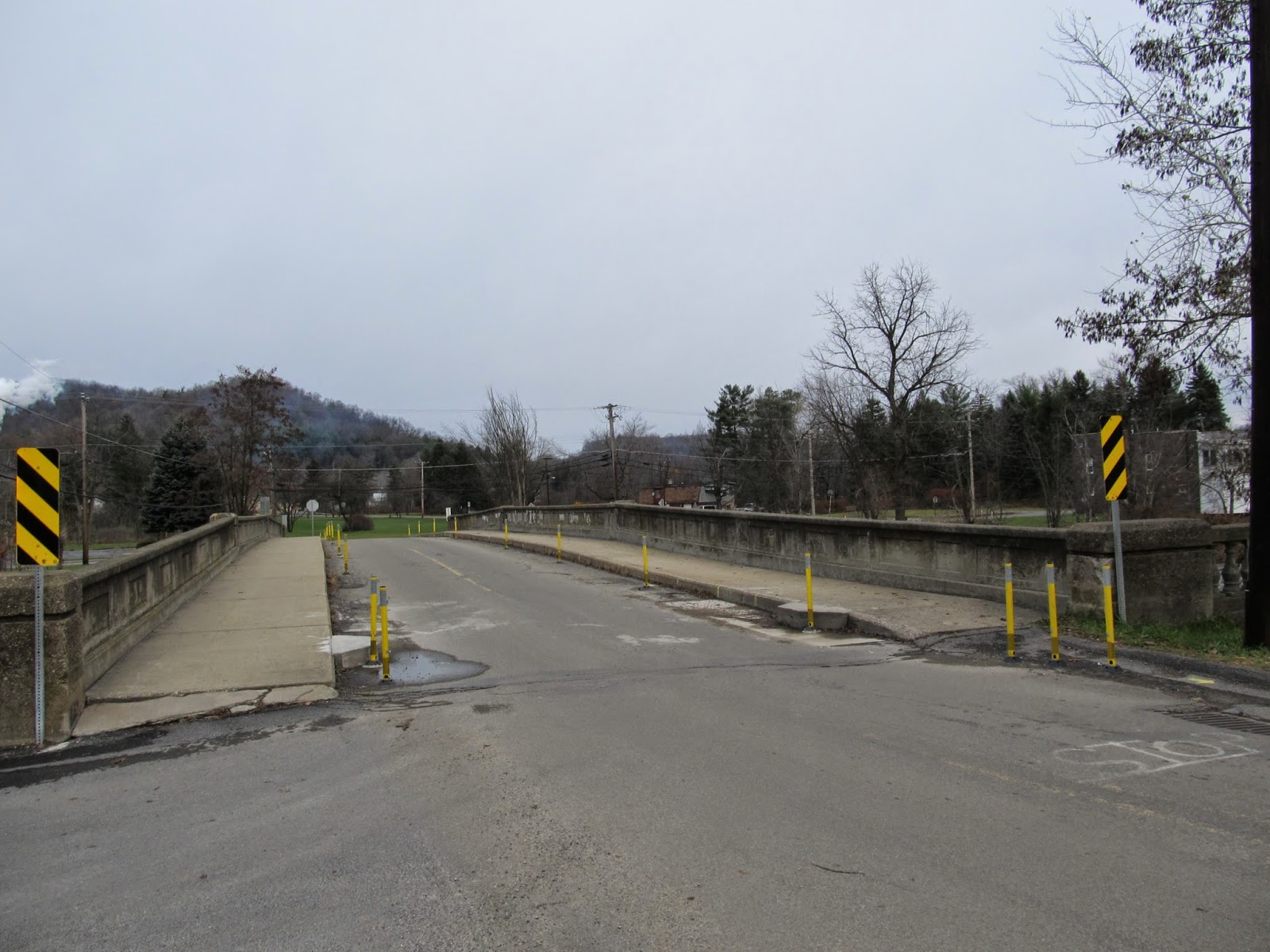 While not an exceptional archaeological site yielding new, interesting finds that will turn Pennsylvania Archaeology on its head, the Summerville bridge replacement project serves as an example of the numerous transportation projects throughout the state where PennDoT has (after the artifacts and associated documentation have been submitted to the State Museum of Pennsylvania, of course!) done its due diligence in helping to preserve the past for the future. These cultural resource management projects have provided archaeologists with an opportunity to look at archaeological resources all across the Commonwealth. Well documented and carefully prepared reports have provided us with a much improved picture of our archaeological heritage thanks to these investigations.

For more information, visit PAarchaeology.state.pa.us or the Hall of Anthropology and Archaeology at The State Museum of Pennsylvania .
Posted by PA Archaeology at 3:37 PM