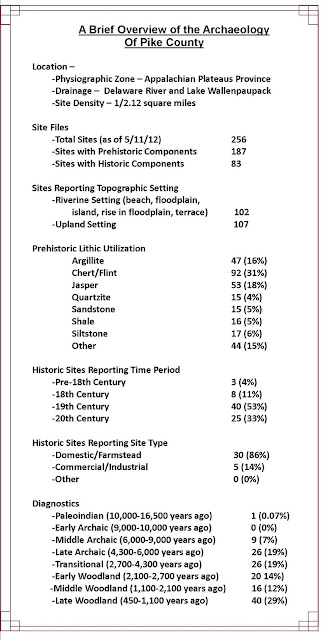 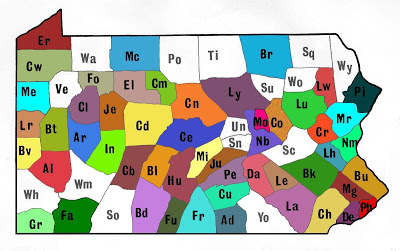 This week our journey by county through the archaeology of Pennsylvania takes us to eastern Pennsylvania and Pike County. This county is situated in the Appalachian Low Plateau section of the Appalachian Plateaus Physiographic Province.  The Delaware River is the major drainage and it forms the eastern boundary of the county. The major streams are Shohola Creek and Bushkill Creek. The region is characterized by many bogs and glacial lakes. Lake Wallenpaupack is the largest lake in the region. It began as a small glacial lake but was greatly enlarged as part of a hydroelectric and flood control project. Beginning as early as the 1880’s, the region became a tourist destination. By the early 1950’s, there were many summer camps and resort hotels along the lakes and the Delaware River. Up until the 1980’s, the region was characterized by dairy/general farms and was sparsely populated. With improvements to the regional interstate highway system, the population has greatly increased although many commute for work in the Allentown or New York metropolitan area. 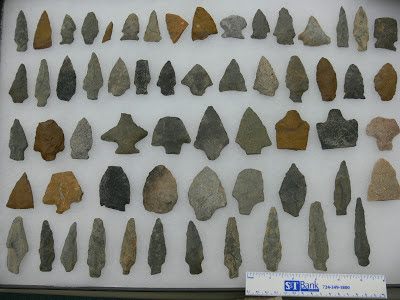 artifacts collected in the vicinity of Lake Wallenpaupack

The site density is below average at 1 site per 2.12 square miles.  Approximately 80% of the sites are located along the Delaware River and Lake Wallenpaupack. Based on a few intensive surveys in upland areas using close interval shovel test pit testing, very small sites have been located around upland swamps (Perazio 2008). Although difficult to discover, these are probably much more common than what is listed in the Pennsylvania Archaeological Site Survey files.

The most common lithic resources for the production of stone tools are chert, jasper and argillite. Chert is locally available in several different rock formations such as the Buttermilk Falls formation. However, there is only one chert quarry recorded in the county. The other two lithic resources are not locally available and these are both located 60 miles to the south. Jasper is found in the Hardyston formation west of the Allentown area and argillite is found in the Lockatong formation east of Doylestown. 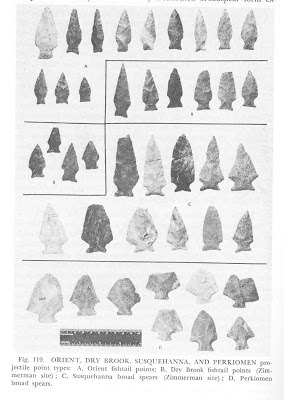 fishtail and broadspear projectile points of the Upper Delaware

Max Schrabisch conducted archaeological surveys in the region as early as 1915. Although he tested some large sites on the New Jersey side of the river, he also located and tested several small rockshelters on the Pennsylvania side. Twenty–six rockshelters are recorded in Pike County. Beginning in the 1950’s, the Lenape Chapter of the Society for Pennsylvania Archaeology, Inc., began recording and testing sites in the region. Their main excavation was the Zimmermann site (36Pi14), located on a wide floodplain of the Delaware River south of Milford. The site was reported by David J. Werner (1972). It represents a well stratified site with major occupations dating between Late Archaic and Late Woodland times. The site is notable for its large Transitional period occupation. The deepest cultural levels are characterized by large platform hearths and Susquehanna broadspears. The majority of the broadspears are made in metarhyolite from the South Mountain quarries nearly 200 miles to the southwest. This occupation is followed stratagraphically by the Fishtail component. This was represented by steatite bowls and over 270 fishtail projectile points. However, these were different than the Orient projectile point type typically associated with this time period. Werner defined a new fishtail projectile point type based on the large assemblage from Zimmermann called Dry Brook. He distinguished the new type from the Orient type as having more sharply angled shoulders and generally wider than the Orient type. However, these two types clearly overlap and the distinctions are not well understood
. 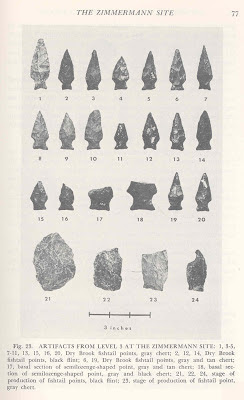 Stratagraphically above the Dry Brook occupation was a level that produced Early and Middle Woodland components. The Late Woodland component was large and produced a large number of pits containing a variety of pottery types including Owasco, Chance and Munsee types. Beginning with the Chance phase, the pits included charred corn, cobs, husks and charred grass linings. Unfortunately, the site did not produce any well defined postmold patterns indicating the size or nature of dwellings. We are fortunate that Mr. Werner donated the Zimmermann collection to the State Museum where it can be studied for generations to come. 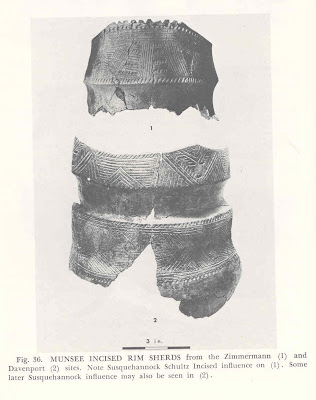 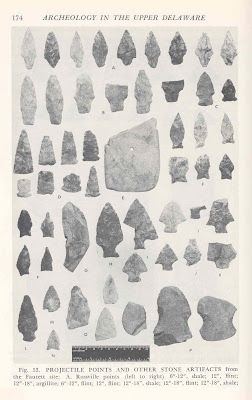 The largest archaeological survey conducted in the county occurred between 1965 and the late 1970s in preparation for the Tock’s Island Reservoir project. Although the dam was never build due to engineering problems, scores of archaeological sites were recorded and over 20 were tested on both the Pennsylvania and New Jersey sides of the river including 10 sites in Pike County. Many of these sites are now part of the Tocks Island Recreation Area and protected by the National Park Service. W. Fred Kinsey, III produced a comprehensive report on the majority of these investigations in book titled Archaeology in the Upper Delaware River Valley (1972). The Faucett site (36Pi13A) and the Brodhead-Heller site (36Pi7) are probably the best stratified and they generally support and enhance the cultural sequence recovered at the Zimmermann site. Faucett produced multiple Late Woodland components including Owasco and Tribal Series pottery. The Middle Woodland, Bushkill component, was well defined at Faucett along with the Early Woodland Meadowood component. More recent research with these components document the shift to domesticated plants but not corn agriculture. The Transitional period was characterized by Orient fishtail points and Perkiomen broadspears. The Late Archaic component was characterized by a small number of Lackawaxen stemmed points and included a cache of five adze blanks. 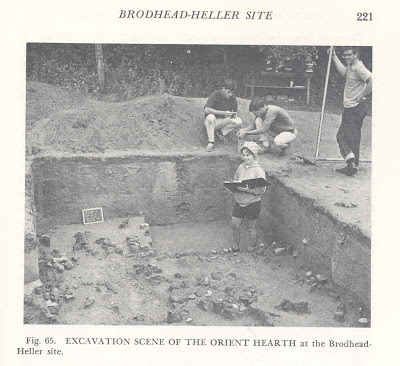 The Brodhead-Heller site produced what seemed to be intermittent Late Woodland and Middle Woodland occupations andt little pottery. The major occupations at this site were Transitional and Late Archaic in age. There were numbers of both Orient and Dry Brook projectile points in the same level representing the Fishtail phase. This association suggests that these types overlap in time and are not chronologically distinctive. There were 23 Perkiomen broadspears representing a large and intensive broadspear occupation. Both the Fishtail and Broadspear phases were associated with large fire-cracked-rock hearths/stone boiling dumps. Unfortunately, these did not contain any organic material so we do not know what food was being processed. The Late Archaic component was found at a depth of over four feet and produced both Piedmont stemmed and Brewerton notched projectile points and included an unfinished atlatl weight. 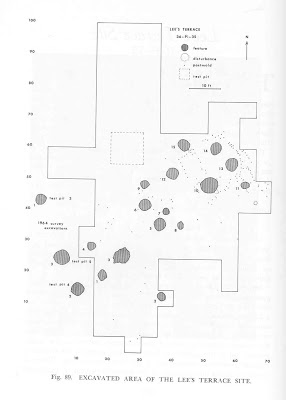 Finally, pits and postmolds were extremely common at all of the sites excavated in the floodplain of the Upper Delaware River but defined house patterns were very rare. The Lee’s Terrace site (36Pi35) produced a possible example of a longhouse and represents one of the few examples that exist for this house type anywhere in the Delaware Valley. 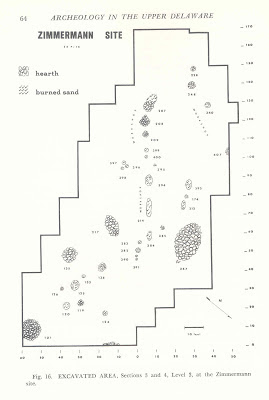 The Upper Delaware Valley is probably one of the best laboratories for the study of Transitional, Early and Middle Woodland adaptations in Pennsylvania. This is a significant period in cultural evolution representing the shift from a foraging adaptation to a horticultural  adaptation. The Transitional period also represents significant changes in social organization. The Upper Delaware also represents an extremely interesting study area for Late Woodland adaptations. Outside of the Upper Delaware valley in the Middle Atlantic region there is extensive evidence for settled farmsteads and concentrated populations living in agricultural villages. Although there is extensive evidence for corn agriculture in the Upper Delaware, the evidence for villages is rare. The question is have the villages not been found or do they even exist?

We hope you have enjoyed this journey through the archaeological heritage of Pike County and that you will seek additional reading in the references provided below.  Understanding and exploring our archaeological heritage is pivotal to our understanding of human behavior and our ability to change and adapt over time - just as the peoples of Pike County have done for thousands of years.