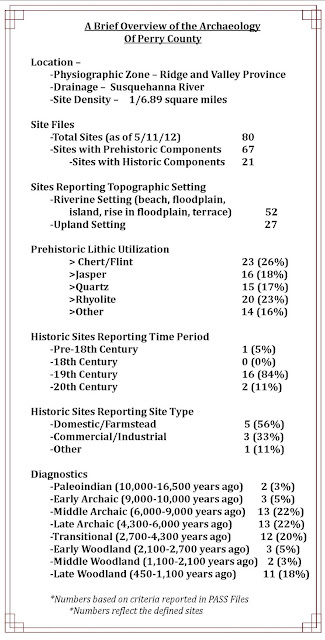 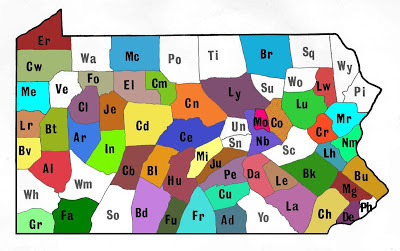 This week our journey through the archaeological heritage of Pennsylvania brings us to Perry County, nestled in south central Pennsylvania between Cumberland and Juniata counties. Situated in the Ridge and Valley physiographic province, its terrain is characterized by long, linear mountain ridges and broad, rolling valleys. These sandstone and shale ridges typically range from 800 to 1200 feet above mean sea level in elevation and are fairly uniform. Their formation is the result of folding, faulting and erosion of sandstones, limestones and shales.  The underlying soils are derived from these rocks resulting in dry, shallow soils.  The drier ridge tops with shallow, nutrient poor soils, are distinguished by chestnut oak (Quercus montana) and black gum (Nyssa sylvatica) with red maple, other oaks, and an understory of shrubs including blueberries (Vaccinium spp.), huckleberries (Gaylussacia spp.), and mountain laurel (Kalmia latifolia). Some of these ridgetop woodlands also contain a significant component of pitch pine (Pinus rigida) and scrub oak (Quercus ilicifolia); these areas are known as Pitch pine-scrub oak barrens (Natural Heritage Inventory, pg.6). Archaeological evidence for native peoples in these upland settings accounts for almost 34% of the recorded sites in Perry County according to the Pennsylvania Archaeological Site Survey (PASS) files. 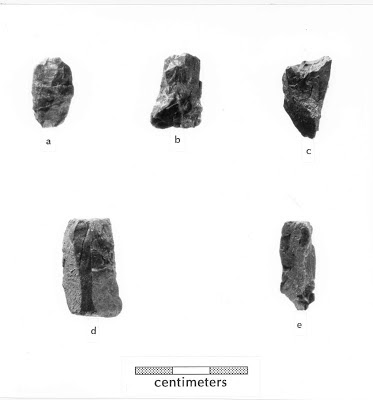 Poor soil associated with these ridgetops, makes the broad valleys and associated rivers and streams a much more likely settlement area and this behavior is reflected in the archaeological record. The county is bounded on the east by the Susquehanna River, and  contains several smaller streams such as the Juniata River, Tuscarora Creek and Shermans Creek provide.  These riverine areas harbor 52 (65%) of the 80 sites recorded in the PASS files for Perry County. Tuscarora State Forest in western Perry County contains remnants of an old growth virgin Hemlock stand in the Hemlocks Natural Area.   Forested valleys were a mix of hemlock, basswood, sugar maple, sweet birch and an understory of ferns, sedges and berry shrubs. Careful examination of soils from certain archaeological excavations reveal seeds and pollens from many of these species and aide archaeologists in creating a “painting” of the environmental setting of a site. 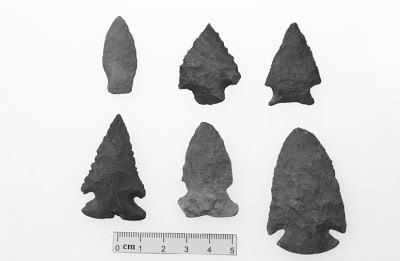 An archaeological investigation conducted prior to construction of a gas pipeline project in the mid 1990s yielded significant data relating to pre-history of Perry County and specifically contributed new information to our understanding of the Clemson Island culture. Located along the west bank floodplain of Shermans Creek is the Miller Field site (36Pe2).  This site produced over 5,000 artifacts and fifteen cultural features comprised of fire pits/hearths, one postmold pattern - probably representing a house feature, and four large multi-use pits.  Three radiocarbon dates were obtained here and they coincide with the site's Late Woodland Clemson Island pottery, establishing a date of occupation between A.D. 805±30 and A.D. 1290±30. 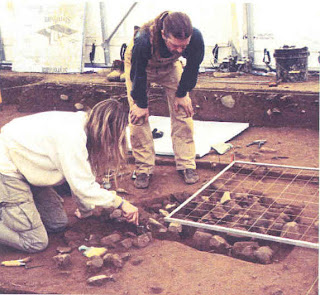 Research and analysis of the data by archaeologists determined that this site was a small multicomponent, seasonally occupied camp or single farmstead utilized by native peoples from the Transitional period (2,700-4,300 years ago) through the Late Woodland period (450-1,100 years ago).  Examination of flaked stone tools, unmodified cores and core fragments provided evidence of projectile point manufacture and resharpening of points which occurred frequently at the Miller site. Stone tools were made from small blocks and stream pebbles using a combination of hard and soft-hammer percussion techniques. Microscopic analysis of wear patterns on these tools indicated varying degrees of unifacial and bifacial wear on primary and secondary trimming flakes.  These wear pattern analyses suggest their use in cutting and scraping, activities related to food processing.  Very few faunal remains were evident, but an abundance of nuts, fruits and seeds were identified through flotation recovery.  These included grape, strawberry, blackberry, hickory, chestnut, and cultivated maize. A recurring presence of carbonized nuts and maize was identified as an indicator of occupation during late fall and early spring.

Clemson Island ceramics were analyzed in relation to vessel size and function.  Typical ceramic types included Cordmarked, Levanna Cord-on-Cord and Clemson Island Punctate. Archaeologists observed a trend among these various forms, which were dated on feature contexts. Once introduced, the ceramic types remained in use through the Clemson Island Culture continuum. This comprehensive examination  provides researchers with an in-depth analysis of the site, but more importantly provides site context and a broader understanding of cultures thereby strengthening our understanding of our  Commonwealth's prehistory.

More recent archaeological investigations were conducted along the Susquehanna River at Liverpool, PA. There, Route 11/15 was widened and the resulting yielded data revealed some of our earliest occupation periods in Pennsylvania. Excavations at 36Pe16, the Wallis site, have provided evidence of a seasonal occupation beginning 11,000 years ago. Various pre-historic artifacts were recovered including six fluted points or point fragments, two Clovis-like points and several Early and Middle Archaic points (6,000-9,000 years ago). Over 590 other tools were found which consisted of knives, drills, gravers, spokeshaves, scrapers, and "beaks". Of the approximately 700 ground stone tools recovered, 38% of were hammerstones. Other ground stone tools included netsinkers, atlatl weights, choppers, pitted/nutting stones, anvil stones, hoes and axes. 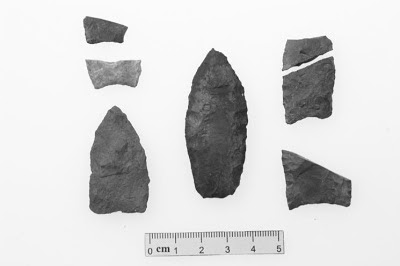 The Paleoindian (10,000-16,500 years ago) group use of the site was likely as a butchering or hunting camp. During the Paleoindian period the Wallis (36Pe16) site was a sand- and cobble-covered riverbank, approximately seven feet lower than the current ground surface.  This area was frequently flooded and it is likely that any camps would have been located on a higher terrace, more suitable for short term, seasonal occupation. Microwear analysis of spokeshaves (tools with a concave edge used for shaping and smoothing shafts such as arrows or tool handles) was used to identify wear patterns as indicators of tool function.  Scrapers and gravers, both associated with butchering and cleaning hides and processing bone, were also examined. The edge wear analysis identified activities related to hunting, butchering, hideworking and the manufacturing tools of stone, bone, wood and antler. Tools made from high-quality Onondaga chert and fine-grained black cherts, indicate a large foraging territory which extended several hundred miles from the site. 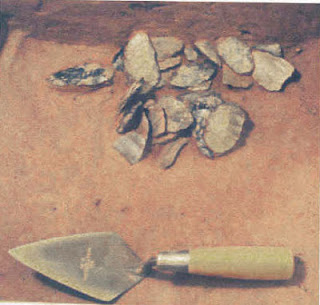 These activities all indicate a broad subsistence diet. The same is true for the Early Archaic period. One thing of note is that the artifact densities increased during this period indicating the presence of multiple occupations.  Soils examined during the excavations yielded pollen samples that indicate a spread in the forested areas and grasslands disappeared. Riparian vegetation growing along the riverbank included cattails and members of the lily family, which have edible tubers. Archaeologists also recovered the bones of coyote, and either wolf or fox, indicating consumption of these animals during this time. A cache of stone tools which had been set aside apparently for later use, suggests a planned return to the site that did not materialize. Fifty-two leaf-shaped tool blanks dating to around 7,000 years ago, made from various stone materials from as far as the Ohio River Valley and as near as the lower Susquehanna River Valley were also discovered. The hunter-gatherers who left this cache operated in a large foraging territory or had an expansive trade network with other groups.  Given the location on the banks of the Susquehanna River, either explanation is plausible. 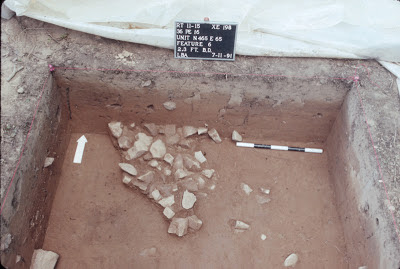 During the Middle Archaic period (6,000-9,000 years ago) the site was discovered to have evidence of agriculture based on the findings of a digging tool, a chopper, and pitted stones. During the Late Archaic period at least 5 periods of occupation were present. .  Stone tools recovered included a netsinker, three pestles and grinding stones used to perform a variety of butchering and processing tasks.  Hideworking was still being done as well as woodworking, soft stone boring, and fashioning of bone tools based on the microwear analysis. The presence of many hearths and other features implies that there were larger groups of people utilizing the landscape for longer periods of time.  Stone tools of this period were made using local cherts, indicating a smaller foraging territory.

During the Transitional Period the site was a base camp of relatively long duration used by large groups. Some of the things consumed at this site included foraging foods as well such as nuts, acorns, and various fruits. Other food sources included large, medium and small mammals as well as turkeys, grouse, and quail. The lithic artifacts provided evidence for temporal changes in point style, technology, and lithic type use. The wide variety of wild plant foods recovered during this period and the observed residues inside steatite vessels provide strong evidence for the presence larger bands of people and the need to obtain additional food sources leading into the Woodland period.

The excavation at Wallis site (36Pe16) produced an abundance of information thereby improving our understanding of some of the earliest occupation periods along the Susquehanna River, but due to its location along a floodplain it offered very little evidence for later Woodland occupations.  Archaeologists must excavate and examine a multitude of sites in order to look at and understand the broader picture of Pennsylvania prehistory. Fortunately, the combined data from these projects provide a more comprehensive view of activities by native peoples in Perry County than was once thought.

We hope you have enjoyed this short overview of Perry County and that this will inspire an interest in recording and preserving the archaeological sites in your community. These resources are Pennsylvania’s heritage and for all of us it is our window into the past. Help us to protect and preserve these archaeological resources which are crucial to our understanding of the past. We encourage every citizen to take an active role in preserving our archaeological heritage and ask that you respect these sites and Preserve our Past for the Future.

The Wallis Site; The Archaeology of a Susquehanna River Floodplain at Liverpool,
Pennsylvania. Byways to the Past series, Pennsylvania Historical and Museum
Commission for the Pennsylvania Department of Transportation, 2009.

For more information, visit PAarchaeology.state.pa.us or the Hall of Anthropology and Archaeology at The State Museum of Pennsylvania .
Posted by PA Archaeology at 4:39 PM