Bucks County: In the 19th century, major excavations were conducted concerning the presence of Pleistocene Man in the New World. 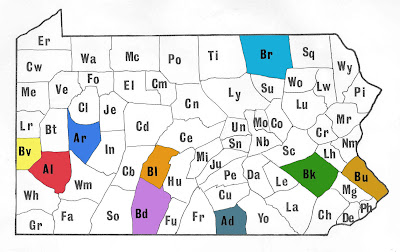 This week we travel to Bucks County in the Middle Delaware drainage basin. The county is situated in the Piedmont physiographic zone, Gettysburg-Newark Lowlands section. The Delaware River forms its eastern border. The largest streams are the Neshaminy and Tohikon creeks. The county contains a wide variety of resources that were useful to both historic and prehistoric peoples. Bucks County has a high density of sites (1 site per 1.46 square miles) and there are 422 sites recorded in the Pennsylvania Archaeological Site Survey files. They include sites dating from the Paleoindian period (16,000-10,000 years ago) through the 20th century.


The region has been occupied by Europeans since the 17th century and contains many historic archaeological sites. One of the most important sites is Pennsbury Manor (36Bu19), home of Governor William Penn.  Excavations were conducted here under the direction of the Pennsylvania Historical Commission (PHC), today known as the Pennsylvania Historical and Museum Commission, with Donald Cadzow supervising the investigation from 1932 thru 1936. Charles Moon, a member of the Commission and a direct descendant of Penn’s caretaker, was instrumental in facilitating the excavations. It was the hope of the Commission that they could create a popular historical attraction similar to those being built in Virginia at Mt. Vernon and Colonial Williamsburg. Funding obtained through New Deal federal relief programs provided resources necessary for the archaeology to be conducted at this important historic site. 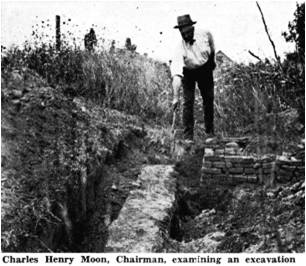 Foundations and a few of the outbuildings were identified by Cadzow, but unfortunately the archaeology was basically disregarded in favor of a style of reconstruction mimicking the Governor’s Mansion at Colonial Williamsburg. 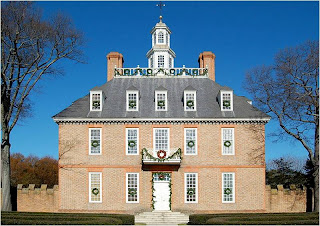 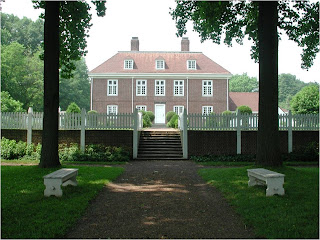 Several stratified sites have been excavated along the Delaware River. The Pidcock sites (Pidcock North 36BU0155 and Pidcock South 36BU0154) near Washington’s Crossing contained Late Archaic Vosburg and Lackawaxen components, a late Middle Woodland net impressed pottery component and several Late Woodland components including Overpeck Townsend and Chance ceramic types. These sites are well stratified and were reported by Stephen Tull in Pennsylvania Archaeologist (1993 63(1):10-49). Although dominated by argillite, a Late Archaic cache produced seven chert bifaces and seven jasper bifaces. The Late Woodland component marks a change from the exclusive use of argillite to the use of local cherts for stone tools. This pattern is observed at most sites in the Middle Delaware. As observed by Mr. Tull, there was no Early Woodland component which is another pattern observed at many stratified sites in the region; the major exception is the Williamson site in New Jersey (28Hu15). It is suggested by Mr. Tull that Early Woodland sites have been destroyed through erosion or that there is a change in site distributions for that time period.

There are 31 rockshelters recorded in the PASS files. Many of these were tested and reported in the Pennsylvania Archaeologist by William Strohmeier (Unami Rockshelter - 1980, 50(4):1-1; Rich Hill Rockshelter - 1985 55(4) 4-11; Thousand Acre Rockshelter No. 1 and Buttercreek Rockshelter - 1988, 58(1):1-6). These reports were important because Mr. Strohmeire was careful to illustrate the variety of pottery types recovered from these sites. The State Museum has a collection from the Eel Skin Rockshelter containing a wide variety of ceramic types that includes Susquehannock pottery from the Susquehanna Valley. The array of pottery indicates these sites were used by a variety of cultural groups. Most of the rockshelters are not large, suggesting short term stays by families or hunting parties using them as “prehistoric motels”.

The Eel Skin Rockshelter site (36Bu59) dates between Late Archaic and Late Woodland times. It contained large quantities of argillite debitage representing the entire continuum of lithic reduction. The site is situated about five miles from the argillite quarries which were a major lithic resource within the county. This argillite material is part of the Lockatong Formation that stretches in a band from the Schuylkill River well into New Jersey. The argillite quarries in Pennsylvania are found along the Delaware River. Argillite was heavily used from Middle Archaic up to Late Woodland times and traded throughout New Jersey and Delaware, especially during the Transitional period. 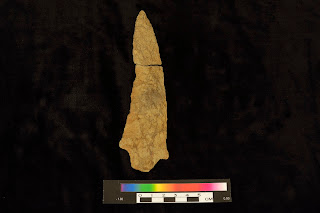 A major quarry site is found along Gaddis Run near the village of Point Pleasant. The Lower Black’s Eddy site is a well stratified site situated along the Delaware River at Point Pleasant. 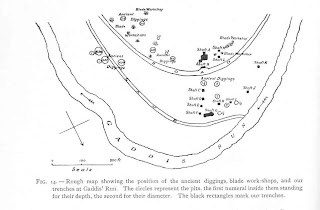 This site was first excavated in the 1890’s by Henry Chapman Mercer and played a major role in the search for “Pleistocene Man” in the New World. Charles Abbott had created a controversy when he observed artifacts in the Pleistocene gravel beds near Trenton, arguing for the great antiquity of Indians in the New World. At the same time archaeologists were documenting artifacts found at Early Pleistocene sites in Europe. Abbott and others were convinced that handaxe-like implements (so-called “turtlebacks”) were analogous to the Paleolithic tools of Western Europe and that the stratigraphic position of these artifacts in gravel beds found along the Delaware River supported a comparable antiquity. 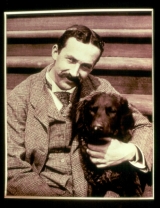 Henry Mercer and his dog Rollo 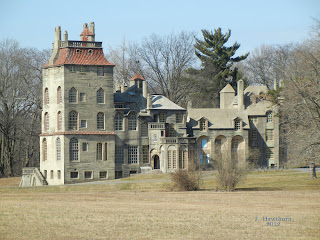 
Mercer, a renaissance man from Doylestown who was at once an antiquarian, a historian, an archaeologist, and the maker of ceramic tiles, including the decorative tiles installed in the Pennsylvania State Capitol, conducted extensive excavations at the site of Lower Black’s Eddy site. Initially, he was motivated to support Abbott’s claims. He had written a book in 1885 (the Lenape Stone, or the Indian and the Mammoth) supporting the purported antiquity of the Lenape Stone which was discovered in New Jersey. This now discredited artifact is a gorget, depicting a mammoth and Indian figures suggesting that both existed at the same time in the New World. 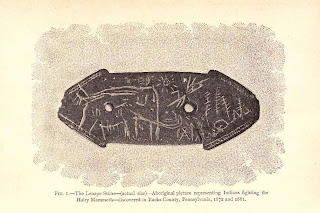 However, after his excavations at Lower Blacks Eddy, he changed his mind. Through his excavations at this site, he was able to link the technology used to manufacture the “turtlebacks” to the finished and common styles of Indian projectile points thus demonstrating the post-Pleistocene age of the these artifacts. Ironically, it took another 35 years for archaeologists to prove the Pleistocene age of Indians in the New World. 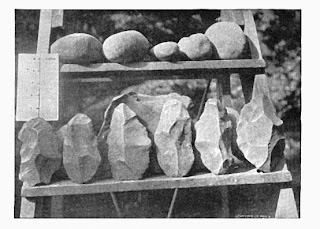 "Turtlebacks"
We hope you’ve enjoyed this glimpse into the archaeology of Bucks County and that it inspires you to learn more about the archaeology of your county. These resources are Pennsylvania’s heritage and for all of us it is our window into the past. Please help us preserve these important resources by reporting and recording your archaeological finds while we all Preserve our Past for the Future.

For more information, visit PAarchaeology.state.pa.us or the Hall of Anthropology and Archaeology at The State Museum of Pennsylvania .
Posted by PA Archaeology at 4:33 PM