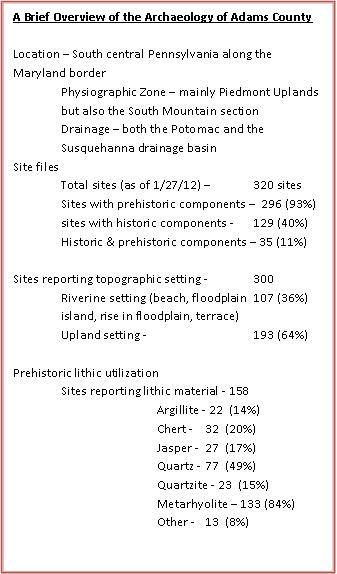 This week we begin our blog series on the examination of the archaeology of Pennsylvania by reviewing outstanding or interesting highlights of each county. Arranging the counties alphabetically, the first county is Adams. This county contains some of the most interesting and significant sites in the state. It contains a high density of archaeological sites and is seventh in the state for sites per square mile, with 320 sites recorded in the Pennsylvania Archaeological Site Survey (PASS) files.  A high frequency of historic sites, (40%) have been identified in Adams county, due in part to the location of the Gettysburg Civil War battlefield. In addition, over 100 sites are located on the federally owned Gettysburg National Military Park and have been assigned PASS site numbers. For security reasons, their locations and cultural data have not been incorporated into our cultural resource geographic information system (CRGIS).
The influence of the Gettysburg campaign is obviously reflected in the archaeology of this county. Many interesting sites dating to the mid-19th century have been archaeologically tested including farmsteads, taverns, urban domestic sites and battle related sites. One of the most interesting but elusive sites is Camp Letterman. Located approximately 1.5 miles east of Gettysburg along the York Road, this was the largest Civil War battle hospital. It was named for the Medical Director of the Army of the Potomac, Jonathan Letterman. The site was occupied for about six months and treated over 20,000 wounded soldiers from both the Union and Confederate armies. Normally, after large battles from this era, field hospitals were established at the nearest farm house or barn closest to the greatest number of wounded soldiers. Initially that was the case at Gettysburg but due to the extreme number of casualties, Letterman wanted to centralize the treatment of wounded. The hospital was established by the end of July 1863. It was situated along the main railroad line so that supplies from Washington DC could be easily brought to the site. However, it was soon realized that the best treatment for the wounded was to put them on trains and get them to better hospitals surrounding the Washington DC area. This process was so successful that in all subsequent battles, the wounded were placed on trains and sent to the major hospitals in the region. 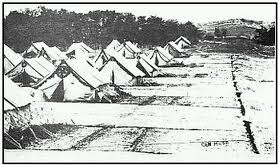 Camp Letterman with drainage ditches to the right
Although this site has long been considered significant by the National Park Service, its exact location was uncertain. What was thought to be its general location was surrounded by commercial development and covered by a trailer park. Therefore, it was not purchased or even recommend for acquisition which resulted in further development impacts. In the 1990s, several construction projects were planned and the appropriate archaeological compliance investigations were conducted. Although, these did not produce many Civil war period artifacts, one produced a linear feature that may have been the remains of one of the drainage ditches surrounding the hospital tents. This feature contained a medicine bottle and a period button. Unfortunately, later investigations did not reveal any additional period features or artifacts. It would seem that some of the site is preserved, but additional survey is required to determine the sites overall integrity.  Camp Letterman is a very significant site in American history. It represents a change in the way the wounded were treated during the Civil War. The archaeology of this site would be greatly enhanced by increasing our understanding of medical practices and life at a field hospital during this era through additional archaeological investigations. 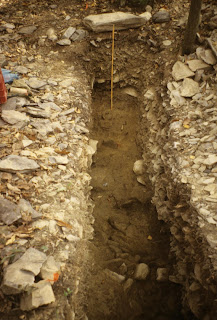 excavation trench at South Mountain rhyolite quarry
In terms of prehistoric sites, several have been archaeologically tested including two rockshelters, many plowzone sites and, of course, the rhyolite quarries. More accurately termed metarhyolite, this is a volcanic material deposited 800 million years ago and metamorphosed (folded) about 300 million years ago. Geologically, much of South Mountain is identified as metarhyolite but it varies considerably in terms of its flaking quality. It was extensively used prehistorically, especially during the Transitional period and 84% of the sites have produced metarhyolite artifacts. It does not have the silica content found in chert or jasper but it flakes well and it is available in very large quantities and in very large blocks.  At least five quarry sites (link to Jan 28, 2011 and July 22, 2011 blogs) have been identified on a remote ridge top along with numerous secondary workshop sites.  One of these, the Carbaugh Run site is a very large workshop site adjacent to the quarries that is listed in the National Register of Historic Places. 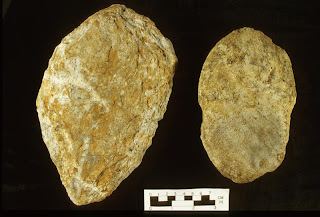 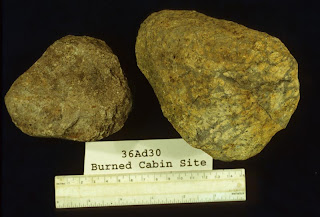 rhyolite hammerstones
Testing at one of the quarry sites revealed a series of extraction pits that were usually less than two meters deep but filled with mostly early stage chipping debris. The most intensive use of metarhyolite occurred during the Transitional period but radiocarbon dates place one of these pits between 7000 and 8000 years old. Unfortunately, the quarry sites are being systematically looted. The sites are owned by the Bureau of State Forests but their remote locations preclude effective protection. To be sure, looting is a crime against all citizens. Every archaeological site is like a small window into the past. Removing artifacts is like stealing pieces from a puzzle. Eventually there are so few pieces that it is impossible to interpret the picture.
The number of sites recorded in Adams county does not preclude the discovery and recording of additional archaeological sites as development spreads and additional investigations are conducted.  We encourage every citizen to take an active role in preserving our archaeological heritage and ask that you respect these sites and Preserve our Past for the Future.
For more information, visit PAarchaeology.state.pa.us or the Hall of Anthropology and Archaeology at The State Museum of Pennsylvania .

Posted by PA Archaeology at 4:16 PM