Q is for Quarry 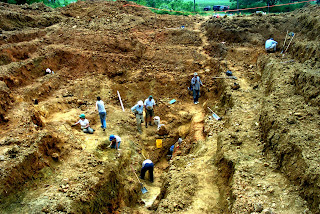 King's Quarry
Not many words begin with the letter “Q”. Luckily, one word that does, “Quarry”, is very significant in Pennsylvania archaeology. As we all know the use of stone tools was central to many groups of prehistoric humans and it is thus very useful for archaeologists to know where and how these resources were obtained. Like other types of archaeological sites, quarries are integral to the complete picture of how Native Americans lived and worked. They provide crucial details regarding prehistoric technology. Furthermore, they give us insight into where lithic resources were originally procured. The ability to link stone tools to their provenance adds specificity and credence to our models of the movements of people and goods in prehistoric times.


Prehistoric quarry sites are the locations where lithic materials are obtained for use in the manufacture of stone tools (including ground stone artifacts such as steatite vessels, celts, adzes, and grooved axes). Pennsylvania has naturally occurring sources of a variety of lithic materials that were used extensively in prehistoric times, including quartz, quartzite, rhyolite, argillite, chert, jasper, chalcedony, and steatite. Quarries can be located at either primary (original provenance) or secondary (cobble) sources and materials can be naturally exposed or uncovered through excavations. Excavations in Pennsylvania appear to consist of open pits, some of which were quite large. At King’s Quarry in Lehigh County, for example, a prehistoric pit was found to have been dug to 23 feet below the surface. As lithic technologies were prevalent in Pennsylvania from the Paleoindian period until European contact, individual quarries often remained a valuable resource for thousands of years. The reuse of quarries over such long periods of time resulted in large amounts of soil disturbance at many sites. At the Vera Cruz Jasper Quarry in Lehigh County archaeologists discovered that new pits were often dug into previously disturbed soil, and researchers project that every part of the 130m x 400m ridgetop at Vera Cruz was probably excavated at some point in time (Hatch and Miller 1985:222). A more in depth account of the variety found in various Pennsylvania quarries can be found in a previous blog (January 28, 2011) dealing with this subject. 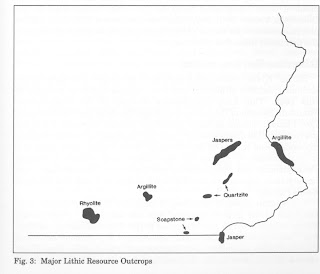 from Prehistoric Cultures, Custer 1996
Artifacts and features associated with prehistoric human habitation are almost never found at quarry sites; quarries are almost always used exclusively for lithic procurement. The most common artifacts on chipped stone quarry sites are debitage (debitage is the excess stone removed from a tool as it is being made- the byproduct of flint knapping). Interestingly, archaeological evidence identified by analysis of this debitage demonstrates that Native Americans would test pieces of stone for flaws and impurities and sometimes very roughly start the process of shaping a tool, but rarely would they complete the fine detailed work necessary in finishing a tool at the quarry itself. Discarded materials occur on quarry sites as chunky or blocky pieces of unknappable material sometimes only very roughly flaked on one or more surfaces. Often near to the quarry is a work area or “quarry reduction station” where materials are taken for further reduction (Custer 1996:107-108). According to Ward and Custer (1988:34-35), however, these secondary reduction sites are absent in steatite bowl production. Instead reduction was begun in the central quarry area in order to verify the quality of the material and reduce the weight for easier transportation before it was taken to the habitation sites where the vessel was then finished. 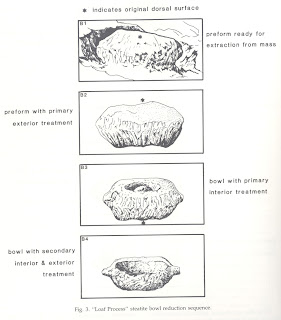 from Ward and Custer 1988 Penna Archaeologist vol.58 No.2
One of the most important aspects of quarry sites is their ability to provide invaluable information on the movement of goods. Comparing stone tools to the material found on any archaeological site to the material available at known quarry sites can identify the artifact’s origin. This can have important implication on our understanding of the movement of people and networks of exchange. Metarhyolite from the Catoctin Formation on South Mountain in the Blue Ridge Province of Pennsylvania and Maryland, for example, was widely used throughout the Piedmont and Great Valley regions of the Middle Atlantic. During the Middle Archaic this source accounts for over half of the diagnostic points in those regions (Stewart 1987). This highlights the high mobility lifestyles of these people and helps us to understand their migratory routes. 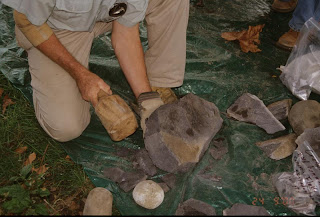 knapping metarhyolite block
Using various techniques of geochemical analysis (including X-ray florescence spectrometry, electron microprobe analysis, instrumental neutron activation analysis, and inductively coupled plasma emission spectroscopy, among others) the elemental composition of lithic materials can be determined. While the major elements of a material are essentially the same no matter where it is found, elements present in very small amounts (called trace elements) are often unique to materials of a certain location. The elemental composition of stone tools found on any archaeological site can be compared with that of material from known quarry sites in order to determine their origins. This technology has still not been widely used in Pennsylvania, but it is starting to play a very prominent role in our understanding of the utilization of specific materials and aforementioned implications of lithic sourcing. It is central to the substantiation of archaeologists’ models of migration patterns and social networks of trade and exchange. As it is applied more and more in the future geochemical analysis will greatly increase the information quarry sites provide on the prehistory of Pennsylvania.

The Wasicki Cache, found in Indiana County, provides an interesting example of current research using geochemical analysis. Much of this collection consists of early stage metarhyolite “quarry blanks and preforms” (Burkett and Kaufman 2001:2). All artifacts are of the previously mentioned metarhyolite from the Catoctin Formation, roughly 100 miles away. Geologist Dr. Robert Smith used a combination of visual observations and various geochemical analyses on one of the Wasicki Cache artifacts and was able to pinpoint the specific quarry from which the artifact originated. The technique of inductively coupled plasma mass spectrometry (ICP-MS) proved the most useful method for identification, leading to the discovery of the traces of Titania (TiO2) in both the source material and the tool. Dr. Smith is currently analyzing several other metarhyolite artifacts in the same manner.

Prehistoric quarries can provide us a lot of very important information. They give us a direct example of how prehistoric people spent their time, and are invaluable to our understanding of prehistoric technology, economy and mobility. For a good example of a specific quarry site follow this link to an account of investigations at the King’s Quarry Site in Lehigh County: http://www.portal.state.pa.us/portal/server.pt/community/phmc_archaeology/2094/kings_quarry/410726

For more information, visit PAarchaeology.state.pa.us or the Hall of Anthropology and Archaeology at The State Museum of Pennsylvania .
Posted by PA Archaeology at 5:24 PM