H is for hoe, hasp, hatchet, hunters, hematite, helgramite points, Huron, Heritage and the list goes on, but this week...

H is for Historical Archaeology.


Archaeology is the study of past human behavior through the systematic recovery and analysis of material remains or objects.

Archaeology is a scientific process of careful excavation and recovery of the archaeological record. This record may be represented in multiple ways to include, soil changes, structural remains, or material remains. These material remains or objects recovered are referred to as artifacts. 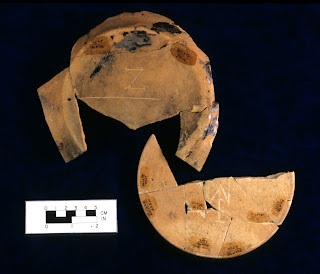 Redware pottery fragments recovered from Ephrata Cloister. Located in Lancaster County, this historic porperty was an 18th century religious communal society founded in 1735 by Conrad Beissel. Members were expected to take vows of celibacy, poverty, and obedience, and personal possessions were not permitted. These bottom of these redware vessels were scratched with initials, indicating individual possession was practiced by some members against communal rules.

The analysis of artifacts recovered from archaeological sites enable archaeologists to create a picture of every day life for cultures and peoples that history often ignores in the historic record. Frequently there is a difference between what is written and what people actually do in their daily lives. You might know who your great grandparents were, but do you know what they did with their garbage, how they planted their garden, what dishes they ate from, if they took in boarders or had servants, how they celebrated their culture and heritage? Perhaps you have a family history that identifies certain aspects of their lives, but often these documents are biased by the writers’ personal beliefs. Archaeology has the unique task of providing a more objective account of our past and providing a more complete picture of our cultural heritage. 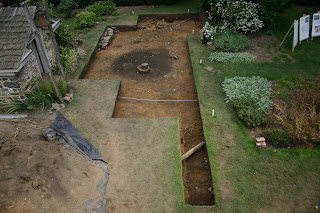 In our own excavations conducted at Fort Hunter the analysis of dietary waste from a hearth feature that we interpret as a bake oven has provided a clearer picture of the diet of soldiers at this provincial fort. Examination of the faunal remains reveals that the meats consumed were from cow, pig, sheep, horse, deer, turtle and fish. Beef represented the greatest percentage of consumed meats, while small game such as turkey or rabbit are absent from the record. Historic documents of the period list provisions for the troops, but it does not indicate how the meats were to be preserved or prepared for transport across the rough terrain. Analysis of the faunal remains from Fort Hunter indicated that the beef was likely salted and cured prior to transport, based on the low number of butchered bones recovered. It also indicates that soldiers were not hunting wild game in the woods surrounding the fort to supplement their meager rations. Bones demonstrated spiral fracturing commonly seen in bones cracked to extract the marrow. Marrow was likely consumed and the bones then boiled for soups. All of this paints a dismal picture of the diet of these soldiers and a more complete story of their daily life.


When we examine our past, we are looking at our cultural heritage. Our cultural heritage is important to most of us as it helps to define our values and identifies who we are. Recent archaeological investigations at historic sites have provided additional information on the heritage of pioneers, immigrants, slaves and Native Americans. Children who are not well represented in the historic record are now documented thru the artifacts recovered at these sites. All of these groups are underrepresented in the historic record and archaeology can provide a picture of everyday life for them. 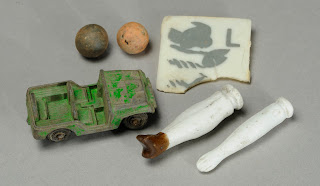 We all benefit from examining our past and preserving our material culture for future generations. This focus on human behavior and artifacts is what differentiates archaeology from history. History examines the events, but it does not make the connection to a person or event through personal objects. By examining our cultural heritage, we can better understand changes in society and hopefully develop better plans for dealing with cultural change in the future. In closing, H is for historical archaeology but more importantly H is for heritage and the preservation of our culture.

For more information, visit PAarchaeology.state.pa.us or the Hall of Anthropology and Archaeology at The State Museum of Pennsylvania .
Posted by PA Archaeology at 5:29 PM