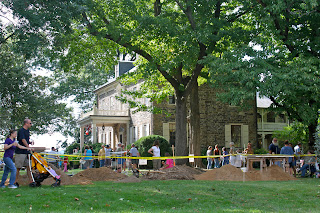 One of the main objectives this year for the Section of Archaeology’s study at Fort Hunter Mansion and Park was to continue explorations in the front yard of the stone mansion built in 1814 by then owner Archibald McAllister. Trench excavations conducted last year revealed a feature of unknown extent containing a mixed assemblage of prehistoric and historic period artifacts. The limited area of excavation in 2009, the complex stratigraphy and the mixture of artifacts precluded a preliminary interpretation of the feature at that time though a series of hand dug auger borings dug that year suggested that it was of a sizable dimension. 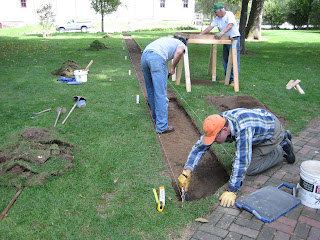 A thirty foot long by five foot wide trench oriented east west was emplaced to intersect with the 2009 excavation trench. A two foot wide by forty foot long trench was also dug to intersect the east end of this larger excavation thus in plan view forming a T-shaped configuration . The purpose of interconnecting the two trenches was to intersect the front yard feature from several directions thereby enabling the archaeologists to better determine its depth and extent. 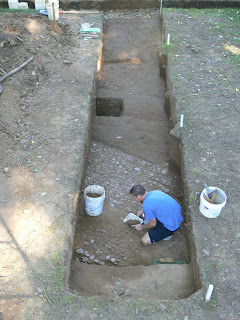 Eight distinct soil deposits were identified across the horizontal extent of the large trench. As observed in the 2009 excavations, all were found to contain mixtures of prehistoric and historic period artifacts, indicating that the soils had been altered and/or replaced during the historic past. At an approximate depth of 30 inches the lag deposit consisting of small cobbles and pebbles appeared to have been disturbed by human activity. This lag deposit was naturally formed from river deposited gravels laid down during the end of the last Ice Age. The profiled south wall of the larger trench excavation shows that displaced remnants of the old cobble lag formed part of the feature initially encountered in 2009. The trench profile also identified the feature’s entire cross-section. This included a 2-3 inch thick five foot wide linear mass, of compact, iron stained and gleyed silty sand in the deepest part of the feature. This feature, designated as Feature 50, is most unusual. Time constraints and limited personnel restricted our studies of areas beyond the large trench. 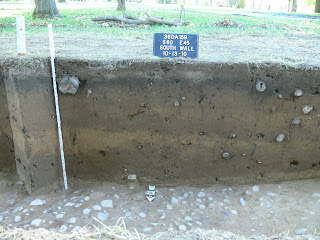 Several hypotheses have been formulated relative to the function of Feature 50. The first relates to the 18th century in a letter referencing the fort site dated July 7, 1758 which states that the “ditch is deepened”. This information implies that there was then an existing fortification ditch or trench surrounding or adjacent to the fort site and that what we have identified as Feature 50 is a segment of this ditch. A second hypothesis is that Feature 50 is a segment of an old road. Supporting the latter hypothesis are the presence of scattered iron scraps found laying upon the cobbles and the corresponding parallel linear impressions found on the cobble lag. The former may be tentatively interpreted as lost or discarded metal and the latter as wheel ruts from repeated use of wagon traffic.

One of the primary goals for 2011 is to return to the front yard excavations at Fort Hunter and excavate a section of the property immediately west of the 2010 trench to further explore these hypotheses and potentially identify the most plausible interpretation of Feature 50.

For more information, visit PAarchaeology.state.pa.us or the Hall of Anthropology and Archaeology at The State Museum of Pennsylvania .
Posted by PA Archaeology at 2:26 PM