During Archaeology Month 2010, archaeologists from The State Museum of Pennsylvania will return to Fort Hunter for the fifth field season. This week, the backfill from last year was being removed and new excavations will begin early next week. 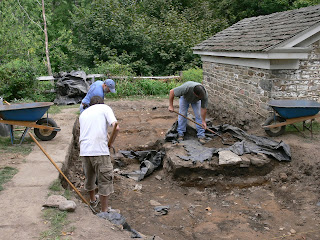 The project is located at Fort Hunter Mansion and Park, five miles north of the capitol in Harrisburg. 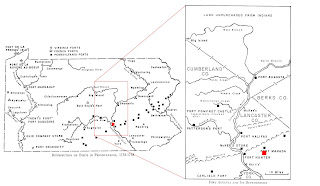 The goal is to locate the remains of the French and Indian War era supply fort occupied between 1757 and 1763. Fort Hunter was part of a chain of three forts built along the Susquehanna River by the British in the mid-1750s at the outset of the French and Indian War. The largest of these was Fort Augusta, located at the confluence of the North and West braches of the Susquehanna River at Sunbury. This was a massive military installation, with earthen walls over 700 feet long. The second fort was located at Halifax, about 20 miles north of Harrisburg. Based on historic documents, Fort Halifax was square with wooden walls or a stockade that measured 160 feet on a side.

Fort Hunter was designed as a supply fort. However, there are no verifiable accounts that anything more than a blockhouse was actually ever built, and the exact location of a stockaded fort has long been debated. There is a reference that the logs for the stockade had been cut, but there are no accounts of the posts ever being erected. The site is currently being interpreted as a 19th-20th- century manor and farm.

In 2006, we uncovered what we believed to be a fort related bake oven. Munitions discovered at the site include musket balls, bird shot and a four pound cannon ball. 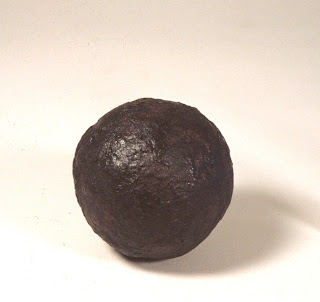 Numerous gunflints have been found. Of note is a gunflint which still retains a lead patch, a method associated with the military. 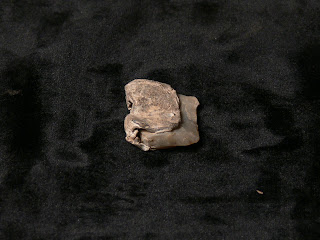 In addition, numerous other fort period artifacts and features have been recovered - some of these may be part of the fort occupation or they may relate to the earlier Samuel Hunter farmstead or the later Col. McAlister house. The stockade and the blockhouse, however, have yet to be located.

The goals for this year include two main objectives.
We will continue to search for the fort’s stockade line and/or surrounding ditch by expanding on excavations in the east yard begun last year. At the end of the 2009 season, a section of thickened A horizon was encountered in this area. This feature is approximately 15 feet wide and had an average depth of 15 to 28 inches. The artifacts from this feature were a hodgepodge of ferrous metal objects, a glass wine bottle fragment and a Lamoka projectile point. This feature still holds the possibility of relating to the fort occupation.

The second area of interest is the block excavation in the north side yard of the mansion. 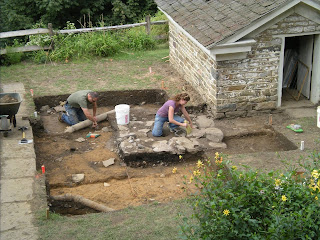 This area contains several interesting features discovered in 2008 and 2009. The largest is a stone “waterwell”. This structure is adjacent to a 1794 icehouse and this year we hope to resolve the chronological relationship between these two structures. This was the goal of last years investigation but the complicating factor has been the stratified prehistoric material all around the “well”. Removing these artifacts required careful documentation of location and position and consumed more time than planned. We still need to remove several levels of soil in this area prior to investigating the “well”. Complicating the interpretation of the “well” was the discovery of an iron pipe entering this structure seven feet below the surface at the very end of the 2009 season. What we thought was a waterwell may be a cistern and dating to the 19th century rather than to the fort period. Historic site archaeology can be very complicated and it is often difficult to interpret ground disturbances but we are hopeful this season’s investigation will resolve the “well” issue.

Finally, ten feet north of the well/cistern is a line of rocks that we initially thought was a walkway. However, by the end of the 2009 season, when we had cleared the upper levels, it is now being interpreted as a possible building foundation. This will require an expansion of the block and, again, the excavation of a substantial prehistoric occupation.

Come visit us at Fort Hunter Park http://www.forthunter.org/ .Our project is part of Pennsylvania’s “Archaeology Month” celebration in September and October. Excavations are open to the public for viewing, weekdays from 9:00 am until 4:00 pm, weather permitting. For more information on Fort Hunter or the archaeology of the Susquehanna Valley, visit PAarchaeology.state.pa.us or the Hall of Anthropology and Archaeology at The State Museum of Pennsylvania.

For more information, visit PAarchaeology.state.pa.us or the Hall of Anthropology and Archaeology at The State Museum of Pennsylvania .
Posted by PA Archaeology at 1:54 PM