As you may remember from our blog last June, we reported on our joint field investigation with Temple University at the Nesquehoning site (36Cr142). The site is located in Lehigh Gorge State Park and was being looted by local pot-hunters. We conducted a week long investigation to determine the extent of the destruction and to promote site preservation with local avocational archaeologists. It was determined that the upper levels, dating to the Transitional Period, had been destroyed but the Middle and Early Archaic levels were largely preserved and there was also a potential for a Paleoindian occupation. Dr. R. Michael Stewart, professor of anthropology at Temple University and graduate student, Jeremy Koch, decided to organize a field school to conduct additional investigations at the site in 2010. 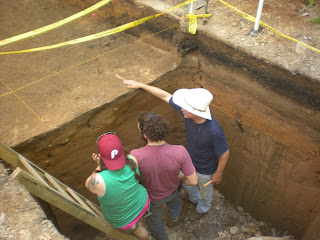 Mr. Koch continued working at the site throughout the summer and fall of 2009, assisted by several avocational archaeologists, notably Dell Beck and Tom Davies. During this time, they were able to get a pretty good handle on the geomorphology. For a site of this stratigraphic complexity, this is an incredibly important aspect of the research and a necessity prior to the actual excavation. One of the most spectacular findings was a carbon 14 date associated with a cluster of jasper flakes recovered from just above the cobbles. Dr. Stewart and Gary Stinchcomb (graduate student, Baylor University) personally funded an AMS (Accelerated Mass Spectrometry) date which assessed at 9940+50 BP. This places the site within the Paleoindian Period and increases its significance in terms of both its research potential and its need for protection.

The field school began on May 17th and is being co-directed by Dr. Stewart and Mr. Koch. The first week was hampered by rain but by the end of the second they were excavating the upper portions of the undisturbed prehistoric strata. They have established a 15 foot by 15 foot unit for excavation. The location of this unit was chosen because it is adjacent to the unit from last year that produced the jasper flakes below the Early Archaic levels and the carbon 14 date. In addition, this block is largely intact and has not been heavily looted. The block is divided into nine 5 foot by 5 foot squares and these will be excavated by two person teams over the next four weeks. The goal is to get to the bottom, six feet in depth and encompassing seven cultural occupations, within this time frame. This is a formidable task, considering their methodology. All artifacts and features will be three dimensionally mapped. One large fire-cracked-rock feature seems to be evident already and there will probably be more. Mapping these features and the surrounding artifacts is incredibly important to their interpretation but very time consuming. The size of this block should provide a good window into the various occupations of the site and allow for behavioral interpretations. 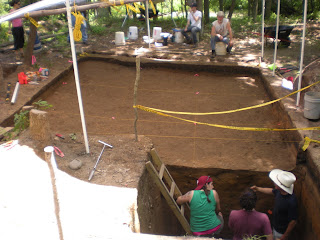 The Nesquehoning site is incredibly important for a variety of reasons. It is stratified and potentially covers the Paleoindian through Transitional Periods. Many of these occupations are confined to single soil horizons and therefore clearly separated from one another. Buried and undisturbed Paleoindian, Early Archaic and especially Middle Archaic occupations are very rare in the Northeast and their excavation, using precise techniques will certainly enhance our understanding of these time periods. Many of the sites that have been excavated from this period were relatively small excavations conducted prior to state and federal construction projects. A long term excavation at Nesquehoning could result in thousands of square feet of Paleoindian and Archaic living floors. This is unprecedented in the Northeast. Finally, the few large excavations that have been conducted on sites from this time period have been conducted on the main stem of the Susquehanna and Delaware Rivers. This site is well up the Lehigh River and will offer a different ecological look at these adaptations.
Mr. Koch is working on his doctorate and will focus on the evolution of lithic technology at this site.
We will publish an update on the excavations once the 2010 field school is completed at the end of June. 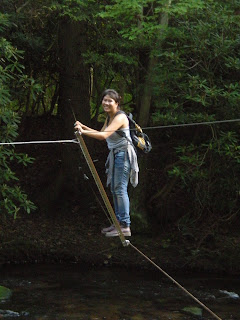 Our intern this summer, Amanda Phatdouang, crossing the cable bridge to get to the Nesquehoning site - the most Indiana Jones-like entrance to any site we know of .
For more information, visit PAarchaeology.state.pa.us or the Hall of Anthropology and Archaeology at The State Museum of Pennsylvania .
Posted by PA Archaeology at 2:31 PM