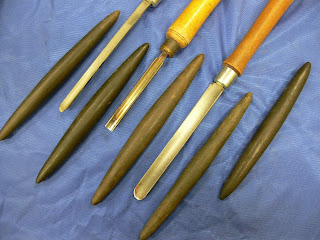 In addition, we consulted with Robert Smith, Geologist DCNR (retired), who has been among the pool of experts called upon in our never ending analytical quest of the “odd and unusual.” He provided insight into a possible method of manufacture and use of these sharpening tools. Bob states, "[the material] was molded and then fired at moderate temperature. Clay is a possible, cheap binder, which would not have required heating to the point where the corundum and quartz would react in a dry system…. Contemporary brand slipstone say they use Japanese corundum and a ceramic [after heating process] binder. They are probably fused until almost a porcelain ..."
Which leads us to solving the mystery of the ceremonial pick featured in last week’s “WHAT IS IT”. The bi-pointed stone tool is a commercially manufactured slipstone used for sharpening a woodworker’s steel gouge!
For more information, visit PAarchaeology.state.pa.us or the Hall of Anthropology and Archaeology at The State Museum of Pennsylvania .
Posted by PA Archaeology at 4:07 PM