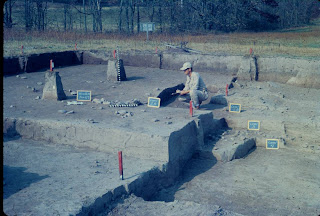 
It is difficult to summarize the many contributions of David J. Werner to Pennsylvania archaeology in one posting. Mr. Werner was a WWII veteran and worked most of his post-war civilian career as a ticket agent for the Erie railroad. A dedicated avocational archaeologist in his spare-time, Mr. Werner was a founding member of the Society of Pennsylvania Archaeology, the Lenape Chapter 12. His collection encompasses over 40 years of archaeological investigation of the Upper Delaware River Valley on both the Pennsylvania and New Jersey sides.

His son, David Werner Jr., donated the collection to The State Museum of Pennsylvania in 2004. Stored in every nook and cranny of Werner Sr.’s basement and attic, the extensive collection included over 175 boxes of artifacts and excavation documentation from over 36 prehistoric and historic sites.

The sheer magnitude of the Upper Delaware artifact assemblage is noteworthy in and of itself. However, the collection’s true value is found in the diligent recordkeeping of Mr. Werner and fellow members of the Lenape Chapter 12. Under the field direction of Mr. Werner, sites were excavated in controlled units that were documented with detailed maps and excavation records.


A great deal of time was also spent organizing site collections and compiling artifact inventories after field work was done. Artifacts were documented, sorted, boxed and bagged by site provenience and in many cases labeled with catalog numbers. It is this attention to detail that arguably produced his most significant archaeology contribution to the Commonwealth, the publication of his report on excavations at the Zimmermann Site (36Pi14) in Archeology in the Upper Delaware Valley (Kinsey, 1972).

In 1960s and early 1970s, the professional archaeological community enlisted members of avocational groups to aid with the identification and excavation of sites endangered in the proposed Tocks Island Reservoir Project Area. The Zimmermann Site was discovered by the Lenape Chapter while conducting a site survey between Matamoras and Dingmans Ferry, Pennsylvania, and was the largest of many archaeological sites investigated by Chapter members during this period.

The site’s unique stratigraphic sequence has added greatly to the regional understanding of the change from Late Archaic hunter/gather lifeways to more horticultural lifeways developed during the Early and Middle Woodland Periods. Zimmermann is a multi-component prehistoric site, with several isolated occupational zones. Werner was able to identify a distinct regional projectile point type, the “Dry Brook Fishtail” and proposed the “Dry Brook” cultural complex based on Level 3 excavations (Radiocarbon date 1280 B.C.). 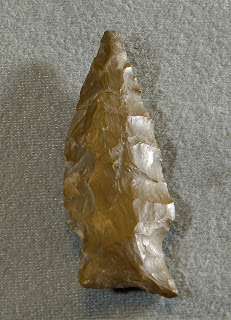 Also found associated with nearly three hundred identified “Dry Brook Fishtail” points in Zimmermann Site Level 3 were sixty-seven hearth features, twenty-one of which were large platforms of fire cracked rock ranging in size from 5 to 22 feet in length and 193 steatite (soapstone) bowl fragments from an estimated 32 individual vessels. This excavation level produced some of the largest reconstructed steatite vessels found in Pennsylvania to date. 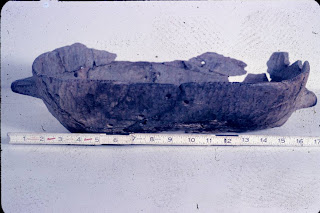 For more information about the Zimmermann Site and the archaeology of the Transitional Archaic Period check out the following link and reference.

For more information, visit PAarchaeology.state.pa.us or the Hall of Anthropology and Archaeology at The State Museum of Pennsylvania .
Posted by PA Archaeology at 4:41 PM