The Tuscarora Nation is celebrating the 300th anniversary of their journey home by retracing the steps of their ancestors along a 1300 mile trail. 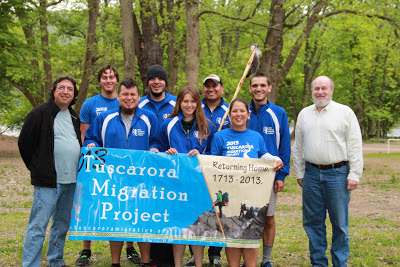 This week in Pennsylvania archaeology we are going to report on a visit from some very special people. On May 7, members of the Tuscarora Indian Nation visited The State Museum of Pennsylvania. They are part of a group of young people who are celebrating the 300th anniversary of the Tuscarora’s journey home. Some of you may remember the Tuscarora visit in 2010. That event celebrated the meeting in 1710 where a delegation of Tuscarora Indians was dispatched from present day North Carolina to deliver a set of wampum belts to the colonial Governor of Pennsylvania. The delegation was seeking permission to relocate their people to Pennsylvania to avoid a war with colonists in North Carolina. The meeting was held on June 8th at Conestoga Town, Manor Township, Lancaster County where representatives sent by Lt. Governor Gookin and the Provincial Council met with the Tuscarora. The Tuscarora carried eight wampum belts symbolizing their desire to have safe lands for their children to play and young men to hunt, protection from slavery, freedom to travel in order to gather wood, food and water, and that they might find peace with their neighbors and the Provincial Government. The Governor and his representatives acknowledged the plan of the Tuscarora to live peaceably and granted them a safe place to live.
The Tuscarora are Iroquoian speakers and they believe they left their ancestral homeland in present day New York for the Carolinas between 700 and 900 AD and this is supported by archaeological evidence. At the Conestoga Town meeting, members of the Iroquois Confederacy invited the Tuscarora to move to their lands in New York rather than stay in Pennsylvania. War delayed the move but following its end in 1713, the Tuscarora started migrating north through Virginia and eventually the Susquehanna Valley. The Tuscarora Nation was admitted to the Iroquois Confederacy “on the cradleboard” (meaning that one of the five nations represented them in council meetings) in 1722 but the duration of the move lasted over 50 years.
In their sojourn through our state, the Tuscarora left a lasting legacy which honors their nation in the names of towns, streams and mountains. The Commonwealth appreciates their contributions to our heritage and wishes to strengthen our ties with the Tuscarora Nation. The Tuscarora Indian Nation is a federally recognized nation, acknowledged by the Federal Government as having a government to government relationship with the United States.

To commemorate the 300th anniversary of their journey home, the Tuscarora Nation sent some of its young people to retrace the steps of their ancestors along the trail. They began their journey on March 24th, 2013 at Fort Nooherooka, Snow Hill, North Carolina and will finish their trip 1300 miles later at the Tuscarora Nation, located in Lewiston, New York near Niagara Falls on June 1st. Their goal is to share the Tuscarora story of amazing indigenous survival; bring attention to climate shift and raise awareness about the need for more "human-powered" movement. 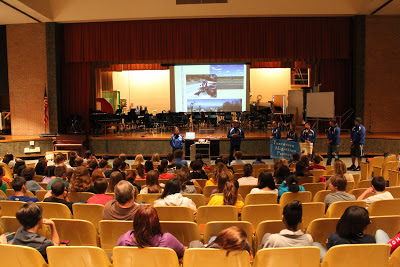 They followed the Tuscarora trail through Virginia, West Virginia, Maryland and southern Pennsylvania by hiking, biking and running. They have covered about 700 miles in 40 days. Using a relay race strategy, they ran into Duncannon, Pennsylvania this weekend. On Tuesday, staff from the State Museum escorted them to Lemoyne Middle School for a presentation to about 120 eighth graders. They described their journey, including allowing students to carry their backpacks. They also described life on the Tuscarora reservation and there were many questions. Marta Hamme, the teacher who organized the presentation, told us later that the students continued talking about the journey and Tuscarora culture for the rest of the day. 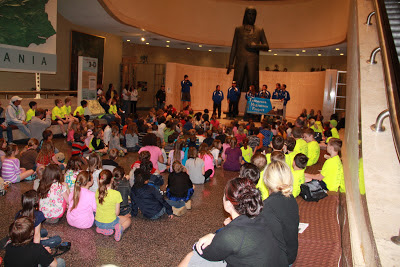 Next, they gave a presentation in Memorial Hall at the State Museum. With approximately 200 students in attendance, there were many questions and we are sure those 4th graders went home and told their parents about seeing real Indians at the State Museum. At lunch we were joined by Francine Patterson, Clan Mother of the White Bear Clan and her husband, Neal Patterson who served as spokesperson. Afterward, there was a presentation in the State Museum to a mostly adult audience. The Tuscarora talked about climate change and how the forest environment changed as they traveled north along the Tuscarora trail.  As a result of global warming, the current climate of North Carolina will gradually move north also. The flora and fauna of their home in western New York will move towards Quebec.  The vegetation and animals will change. What should the Tuscarora do? – move north or stay and adapt to their new surroundings. They also discussed what they had learned about “human powered movement”. Every time someone walks or bikes to school or a store or work they are reducing our dependence on fossil fuels and contributing to a safer environment. 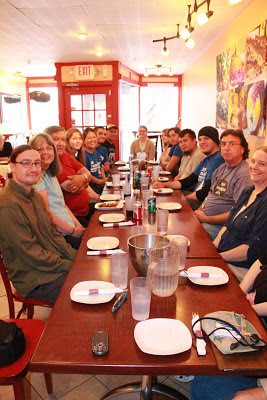 Finally, Francine Patterson is one of the most fluent speakers of the Tuscarora language. She has developed a dictionary and spoke on the importance of maintaining her native tongue. The language is taught in the elementary school on the reservation but there are few speakers. During the twentieth century, the speaking of Native American languages was generally discouraged. However, language is very important in maintaining cultural traditions and the practice is making a comeback with many Native American cultures. 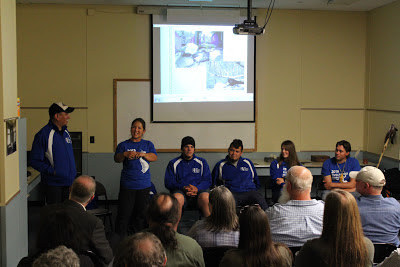 It was interesting that our invitation for the afternoon presentation to the public seemed to reach a number of individuals from the local Indian community. This is good because it represents a positive and non-confrontational interaction involving these groups. Later, we took the Tuscarora through the gallery and our lab. It was assumed that they would be tired but they stayed in the gallery until after 4:00 and we didn’t leave the lab until after 6:00.  It was a good day for the State Museum and the Tuscarora. 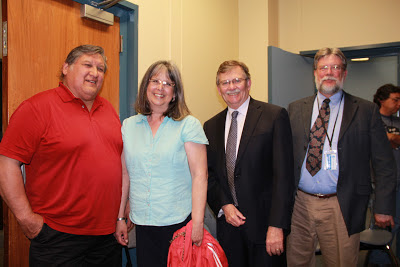 To learn more about the Tuscarora, visit their web site at TuscaroraMigration.org and their Face Book page is 2013 Tuscarora Migration Project where they post regular updates on their journey

For more information, visit PAarchaeology.state.pa.us or the Hall of Anthropology and Archaeology at The State Museum of Pennsylvania .
Posted by PA Archaeology at 3:12 PM