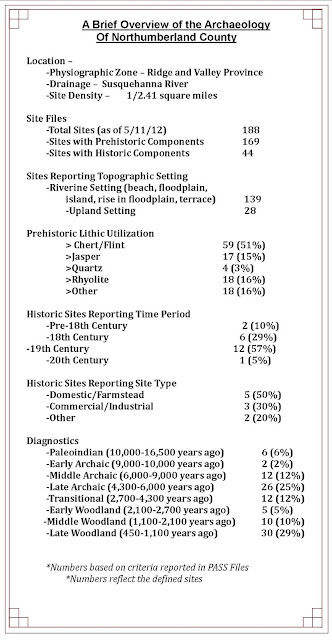 Our journey through the archaeological heritage of Pennsylvania takes us to the central region of the state, Northumberland County. Located in the Ridge and Valley Physiographic Province the terrain is composed of long linear mountainous ridges and rich, fertile valleys in between these ridges.   The Susquehanna River has cut a wider valley in the sandstone and shale bedrock which underlies much of the region. Lithic resources used by Native Americans include two chert formations, the Onondaga/Old Port formation and the Keyser formation. Stone tools are also frequently found in a fine grained, slightly metamorphosed material of unknown origin. The chert formations provided native peoples with brownish black to gray cherts for their stone tools.

The location of this county on the Susquehanna River provided an opportunity to travel and trade for cherts from the surrounding areas as evidenced in archaeological materials recovered. The greatest percentages of sites recorded in the Pennsylvania Archaeological Site Survey files (PASS) are located in riverine settings; many of them are located along the Susquehanna. Indian foot paths which transected the area include the Tulpehocken Path, Penns Creek Path, Shamokin Path and the Wyalusing Path with additional secondary paths.  These paths ran along the mountain ridges and valleys that form the topography of this county.

It is difficult today to imagine that Northumberland County was considered a frontier area virtually unsettled until the 18th century. Established in 1772 as the tenth county organized in Pennsylvania it was created from an 8,000 square mile tract of land lying northwest of the counties of Lancaster, Cumberland, Berks, Northampton, and Bedford. The land area of Northumberland County eventually increased to 15,000 square miles, covering the Susquehanna Valley, including all the land west of the Lehigh River to the Allegheny River and all of the land south of the New York State border to Juniata County. As the area grew and became more populated, the county was divided multiple times, which eventually led to the establishment of twenty-nine counties from this original 15,000 square mile tract of  land.

The PASS files list sites in all of the occupation time periods for this county and include six Paleoindian Period (10,000-16,500 years ago) sites. One of these sites was surfaced collected by locals for many years prior to a formal excavation for a Pennsylvania Department of Transportation bridge replacement project.  An archaeological investigation conducted for the Allenwood Bridge Replacement project in the late 1980’s uncovered archaeological features from the Late Archaic/Transitional Period through the Late Woodland Period.  Evidence of the Late Archaic occupation included thirty-seven stemmed and side-notched points.   Three burn features were identified and radiocarbon dated to between 2007 – 3367 years ago. These would place the occupations in the Transitional and Early Woodland periods.  Archaeologists determined that the site was likely occupied for short periods, possibly in the fall as indicated by nutshell recovered in one of the features.

The later occupation dates for this site were determined based on both radiocarbon dating and the recovery of associated prehistoric ceramics. Soil features included semi-circular post mold patterns interpreted as Clemson Island (circa 1000 AD) house patterns.  An additional Late Woodland occupation was identified as Shenks Ferry based on ceramics recovered in a burn feature with a radiocarbon date of 1494±90 B.P. Two semi-subterranean keyhole structures were also identified and firmly dated to the Shenks Ferry culture time period (1400-1500 AD).  These keyhole structures are frequently found on the periphery of Late Woodland villages (Hatch1980), and it was surmised that these structures also represent the western periphery of a series of Late Woodland villages at 36Nb3.  Agricultural remains recovered include maize, beans, grape seed and nutshell. The excavation provided a wealth of information for Late Woodland occupations that furthered our understanding of these culture groups and led the way for additional specialized analysis of archaeological investigations.

Excavations conducted by the Pennsylvania Historical & Museum Commission (PHMC) in the 1990’s uncovered additional evidence of another Late Archaic site. The Central Builders site (36Nb117) is located two miles from the confluence of the north and west branches of the Susquehanna River. It was the location of the first Archaeology Week celebration in Pennsylvania in 1990.  It attracted local attention because it contained a high concentration of artifacts on the site’s surface. The initial work consisted of a controlled surface collection and this produced thousands of artifacts dating from Early Archaic to Late Woodland times. During this process, a large Late Archaic fire-cracked-rock feature was located and partially excavated. The most significant data however, was uncovered during geomorphological testing. A short backhoe trench was placed on the levee in order to examine site stratigraphy of the soil. Near the bottom, at a depth of approximately nine feet, a few artifacts were uncovered including two large chert cores. Over the next several months, a two meter square was placed and excavated to the depth of the artifacts. At the level of the two cores, more artifacts were uncovered along with a metarhyolite Kirk corner notched projectile point and a small hearth. The charcoal from this hearth was radiometrically dated to 9165+210/-205 BP.  The metarhyolite was carried 130 kilometers (80.7 miles) from its source in South Mountain near Gettysburg and demonstrates that Early Archaic bands were moving over and occupying large territories.

Northumberland County played an important role during the French & Indian War (1755-1763). Fort Augusta (36Nb71), located at present day Sunbury, was the largest defensive fort established on the Susquehanna River. This was considered the western frontier at that time.  Construction began in 1756 and improvements continued until 1758. It was the garrisoned the longest by provincial troops and provided Indian trade to the nearby village of Shamokin. After 1761 Augusta was the only provincial fort maintained in the commonwealth (Waddell & Bomberger 1996).  Excavations conducted here under the Works Progress Administration (WPA) uncovered portions of the stockade and personal effects that provided evidence of foods and daily activities of the troops.

The acquired a portion of the fort property in 1932 for the purpose of interpreting ’s history.  Archaeological investigations on the site in 1938, 1978, 1979, 1981, and 1992 discovered elements of the fort’s stockade, officer’s quarters, north flanking wall, moat, and powder magazine, permitting placement of the fort on the modern landscape.  Today visitors can view excavated artifacts and learn more about the fort in the Hunter Mansion, locally operated by the Northumberland County Historical Society under agreement with the PHMC.

We would be remiss in not reporting on another of our PHMC properties in Northumberland County, the Joseph Priestley House.  Joseph Priestley is most notable for his discovery in 1774 of oxygen while living in England.  Very few people know that he relocated to Pennsylvania after his home and labs were burned because of his religious beliefs. Priestley’s support of the American Revolution and his opposition to the Angelican Church combined with support of the French Revolution led anti-French rioters to destroy his home burning his lab and extensive library in 1791.  Priestley relocated in 1794 and died here in 1804. He was a noted theologian, political progressive and prolific author whose scientific contributions include the development of the carbonation process, the identification of carbon monoxide, and early experiments with electricity.

Excavations conducted by the PHMC under the direction of Stephen G. Warfel at (36Nb70) recovered evidence of Priestley’s lab equipment.   Archaeologists discovered the most important artifact assemblage recovered during the 1986 field season – 259 fragments of broken laboratory equipment. The fragments primarily consisted of earthenware tubes, some of which retained chemical residues. Analysis of a sample of these tube fragments and residues permitted speculative reconstruction of experiments Dr. Priestley had performed in his laboratory.“Characterization of the residues ... suggested that in all cases the labware was utilized at elevated temperatures and most likely in the presence of molten reactants”  (Scheetz and Smith 1990). Experiments were clearly designed to produce oxygen, a finding consistent with Dr. Priestley’s efforts to defend his theory of phlogiston during the final years of his life (see Soloveichik 1962: 644-646.) The discovery of laboratory apparatus fragments in Test Pit 1, located in close proximity to the door and window of Dr. Priestley’s laboratory, is no coincidence. They were obviously discarded after breakage by being tossed through one or the other opening, a refuse disposal practice consistent with 18th century behavior. (Warfel 1997) The recovery of these laboratory artifacts and household goods provide tangible evidence of this important researcher and theologian. Visitors to the site can enjoy the house and reconstructed laboratory, furnishings include the fragments of his laboratory equipment and household furnishings.

We hope you have enjoyed this journey through the rich archaeological heritage of Northumberland County and you will seek out the heritage of your community.   Understanding and exploring our archaeological heritage is pivotal to our understanding of human behavior and our ability to change and adapt over time- just as the peoples of Northumberland County have done for thousands of years.

For more information, visit PAarchaeology.state.pa.us or the Hall of Anthropology and Archaeology at The State Museum of Pennsylvania .
Posted by PA Archaeology at 6:06 PM