The period between 6000 and 8000 years ago is the most poorly understood time in the prehistory of the Middle Atlantic region. The reason it is difficult to recognize, is that the usual diagnostic artifacts, such as projectile points are not very distinctive and are easily confused with point types from other periods. We are dependent on radiocarbon dates to confidently identify this period in the archaeological record and C-14 samples are not always available. This week’s blog will review the projectile point types associated with this period in Pennsylvania, highlighting the problems with their identification.

The Middle Archaic period dates between 9000 and 6000 years ago and begins during the warm and dry Boreal climatic episode. A pine and birch forest was gradually changing to a pine-oak forest during this time. The beginning of this period is characterized by bifurcate based projectile point types such as MacCorkle, St. Albans and LeCroy types. These are distinguished from other points by a bifurcated base - a deep notch in the base of the point. They are very distinctive and although there is a great deal of variation in the shape of the blade and the nature of the bifurcation, there are no other projectile points like these in the eastern United States and in Pennsylvania they date between 9000 and 8100 years ago.  We know this because charcoal associated with bifurcate points has been radiocarbon dated at several sites and except for a few outliers, the dates fall within this time range. This pattern established from tested sites, allows us to assign them to the Middle Archaic, even when they are found on the ground surface and not associated with carbon 14 dates. Therefore, they are very useful as chronological markers and dating archaeology sites. 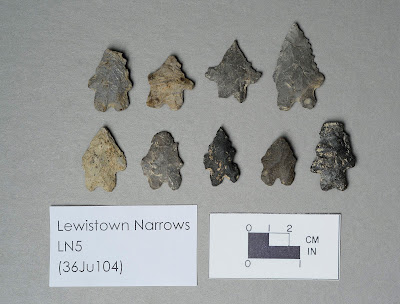 Bifurcate projectile points are diagnostic for the period between 8100 and 9000 years ago. These are from the Lewistown Narrows site (36Ju104) along the Juniata River

Around 8400 years ago, the climate changes to the warm and wet Atlantic climatic episode that signals a significant increase in food resources, especially acorns for Indian populations in Pennsylvania. Edible seeds, nuts, berries, roots, fish, waterfowl and a variety of mammals were very common. In fact, the late Middle Archaic period is the beginning of a 4000-year period of optimum conditions for hunting and gathering populations adapting to the temperate climate, deciduous forest. Bifurcate based points gradually decrease in frequency and are replaced by Kanawha stemmed type. This is the beginning of a projectile point sequence that is not especially distinctive and therefore this time is difficult to identify. The Kanawha point type is described as having a small triangular blade with a short rounded and shallow notched base (Broyles 1971:59). Although considered by some to have a bifurcated-base, the notch is diminished, and this author considers the base more concave than truly bifurcated. These are found from West Virginia to the Atlantic coast and date between 8200 and 7700 years ago.

In the archaeological record of Pennsylvania, the Kanawha type is replaced by stemmed points that are generally more narrow than bifurcate points. These are defined as Stanly or Neville types. The Neville point was defined by Dena Dincauze in New Hampshire (Dincauze 1976:26-29) and the Stanly type by Joffre Coe (1964: 35-36) in North Carolina. A large number of these points were found in a stratified context at the West Water Street (36Cn175) and Memorial Park (36Cn164) sites in Lock Haven, Pennsylvania along the West Branch of the Susquehanna river dating to between 8200 and 7600 years ago. The problem with the Kanawha and the Stanly/Neville types is that they are basically stemmed points, sometimes with a concave base and sometimes not. They can be easily confused with each other or other stemmed points that have been re-sharpened such as the Piney Island type that commonly dates later to between 5000 and 2000 years ago or even re-sharpened Lehigh broadspears. At the Memorial Park site, Stark and Merrimack points were found above the Neville points. The stemmed Stark point is characterized by a long narrow blade, a short contracting stem and a relatively thick cross-section. Merrimack points are also long and narrow but with a longer straight stemmed base. These date to approximately 7000 to 6000 years ago. Again, unless found in a stratified context, these are easily confused with a variety of point types that date between 5000 and 2000 years ago such as Bare Island, Lehigh, Piney Island, Poplar Island, and Lackawaxen types. 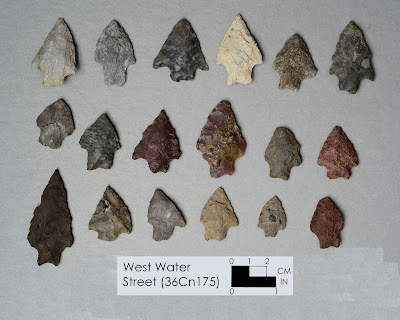 To complicate the situation further, at this same time, triangular points known as Hunterbrook, Beekman or simply Archaic triangles are found with the stemmed points. Triangular shaped points are the hallmark of the Late Woodland period and have long been regarded as arrow points. However, it is now recognized that triangular points have been found in stratified contexts at sites throughout the Middle Atlantic region dating from Middle Archaic to Transitional times. Archaic triangles are not found in high numbers at any one site but begin to occur with other point types beginning at approximately 8000 years ago and extend to the end of the Late Archaic at 4300 years ago. There has been an effort to distinguish Archaic triangles from later Woodland triangles however, Katz (2000) presents extensive data that demonstrate that Archaic through Early Woodland triangles are difficult to distinguish from Late Woodland triangles. 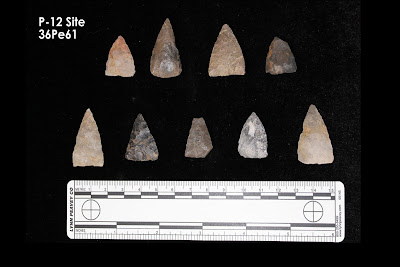 Finally, Otter Creek points appear about 6000 years ago. Ritchie (1965: 85-86) considered this side-notched type to be the diagnostic projectile point type of the Vergennes Phase, Laurentian tradition, and it was associated with the ground slate semilunar knife, gouge, adze and the winged atlatl weight. This is a relatively distinct point type with a squared off base. Ritchie (1961: 40) describes this as a narrow to medium wide point with a distinctive squarish tang. The base is usually concave, sometime straight but squarish and relatively thick. They frequently exhibit extensive re-sharpening resulting in a smaller, sometimes asymmetrical blade but with a squarish base. 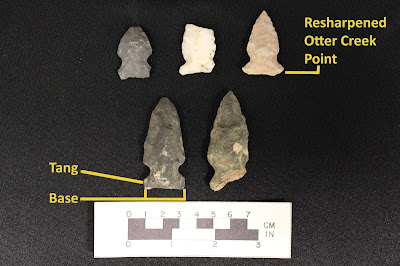 Interestingly, notched points of the Brewerton tradition begin to appear at about 5800 years ago during the same occupations as Otter Creeks and Archaic Triangles. Brewerton side-notched and Brewerton Corner-notched usually outnumber the Otter Creeks and Archaic triangles but they are frequently found in the same occupations. At the Memorial Park and Raker I (36Nb58) sites along the Susquehanna river, Otter Creek points were found with Hunterbrook/Beekman triangles and Brewerton corner-notched projectile points. At the East Bank site (36Nb16), Otter Creek points were found in several strata, but they are concentrated in Stratum IV dating between 6220+40 BP. and 5510+40 BP. (East et al. 2002). Hart et al. (1995) suggest that the Otter Creek type dates slightly earlier than and overlaps with the Brewerton series. An average of three radiocarbon dates from this site produced a date of 6022 BP. for the Otter Creek-dominated Early Laurentian level. At Raker I, these three types (triangles, Otter Creek and Brewerton) were all found in the same level (Wyatt et al. 2005). 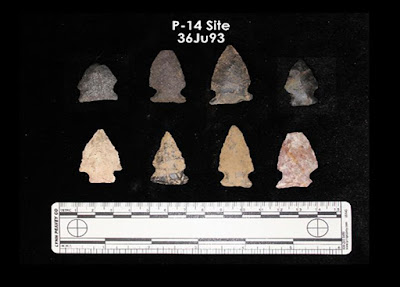 Some archaeologists have suggested that the Brewerton type functioned as the spear point, the Otter Creek functioned as a knife and the Archaic triangles as arrow points. Testing this hypothesis would require a systematic microwear study of these artifacts. The Otter Creek type seems to disappear by at least 5200 years ago or much earlier. After this time, traditionally defined as the Late Archaic period, in the Susquehanna and Delaware drainages, narrow contracting stemmed or straight stemmed points such as Bare Island, Piney Island, Poplar Island, and Lackawaxen types dominate artifact assemblages along with a few Archaic triangles. In the Upper Ohio Valley, Brewerton notched types remain common. This is the beginning of the Late Archaic period and projectile point types continue to be problematic in dating sites because they seem to be used over a two to three-thousand-year time spans.
We hope you have enjoyed this discussion of the confusing projectile point types of the late Middle Archaic period.  Perhaps, you have your own thoughts on these issues that you would like to share. Also, please visit our other blog posts where we discuss the projectile points of the Paleoindian (7/14/11) and Early Archaic (1/19/18) periods or other point types such as the bifurcates, broadspears, the Meadowood (5/12/17), Hellgrammite (5/12/17), Jacks Reef and triangular types (9/15/17).
Please join us in preserving our archaeological heritage and if you do actively collect artifacts, please record your finds in the Pennsylvania Archaeological Site Survey files (PASS) . This data is important information for archaeologists in understanding the past and developing these point typologies.

For more information, visit PAarchaeology.state.pa.us or the Hall of Anthropology and Archaeology at The State Museum of Pennsylvania .
Posted by PA Archaeology at 4:12 PM