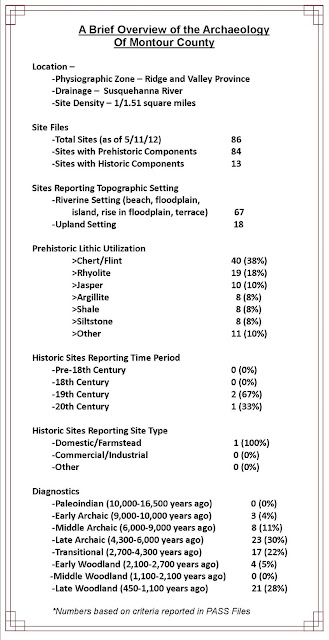 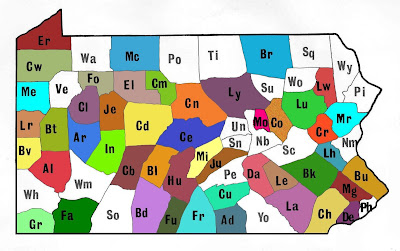 Montour County is abbreviated "Mo" on this map

This week our journey by county tour through the archaeology of Pennsylvania takes us to central Pennsylvania and Montour County. This county is situated in the Susquehanna Lowland section of the Ridge and Valley physiographic Province.  The Chillisquaque Creek is the major drainage and it flows to the west, joining the West Branch of the Susquehanna River in Northumberland County. Mahoning Creek drains the southern portion of the county into the North Branch of the Susquehanna River at Danville. Montour Ridge covers the southern 20% of the county and the remainder is a lowland area drained by the Chillisquaque Creek.

The site density is above average at 1 site per 1.51 square miles.  However, sites are not evenly distributed across the landscape. Approximately 88% are located along a 3.5 mile stretch of the Chillisquaque as it flows through this central lowland area. The lowland area probably contained numerous plant and animal resources and would have been highly desirable to the prehistoric inhabitants. In addition, reportedly, there are chert outcrops just east of this region that would represent an additional attraction for Native peoples. About 10% of the sites in Montour County produced pottery and all of these are along the same stretch of the Chillisquaque suggesting that the use of this area included at least temporary habitation sites and were not simply transient foraging camps. 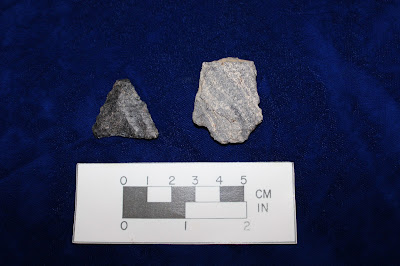 Only ten sites have been recorded along the main stem of the Susquehanna River where a higher density would be expected. The likely reason for this disparity is reporter bias. The majority of the sites along the Chillisquaque were recorded by one individual and therefore this is not representative of the entire county.
The most common lithic resource for the production of prehistoric stone tools is chert. Relatively small outcrops of this material are present throughout the Ridge and Valley province. As mentioned above, at least one outcrop is believed to be located in the county. Interestingly, metarhyolite and jasper are the next two most common lithic types and these outcrops are far away at a distance of 125 miles and 100 miles respectively. During the Transitional period (4300 – 2700 years ago) these materials were commonly traded throughout the Middle Atlantic region and their presence may be the result of this type of cultural activity rather than the direct procurement of this material.

The largest archaeological survey conducted in the county was performed in preparation for the Limestone Handling Area and pipeline associated with the PPL’s Montour Steam Electric Station near Washingtonville. This project is situated near the Chillisquaque Creek, within the lowland section of the county. The soils in this area are residual or thin alluvial deposits and stratified Holocene soils are a low probability for archaeological sites. A Phase I survey identified five sites; 36Mo80, 36Mo82, 36Mo83, 36Mo84 and 36Mo85. Two sites, 36Mo80 and 36Mo83, were considered potentially eligible for the National Register and required an additional Phase II investigation to determine their eligibility to the National Register.

The Strawberry Ridge site (36Mo80) was tested using a controlled surface collection and a number of excavation units. This produced few artifacts (n=227) over an approximately four acre area with a concentration at the north end of the site. The debitage (flakes) suggested an activity area where the final stages of stone tool manufacture took place and/or tool refurbishing ((re-sharpening). All of the lithic material was the local Shriver chert. The site also produced a blocky chert that was rarely worked. It is not known if this material originates in the Shriver formation or actually came from some un-identified source. The author of the report (Kira Presler – now Kira Heinrich of the Bureau for Historic Preservation), hypothesized that the site represented repeated short term visits to the area in order to exploit biological resources (food or raw materials such as reeds for basketry) in the adjacent wetland. On most occasions, the visits were believed to have been short term, involving very small numbers of individuals. The northern activity area represents a more substantial camp where the resources were processed with cutting and scraping tools. This may represent the activities of a small work group or family who visited the site for a day or two. Based on diagnostic projectile points, the site was used between Middle Archaic and Middle Woodland times (9000 – 1100 years ago). 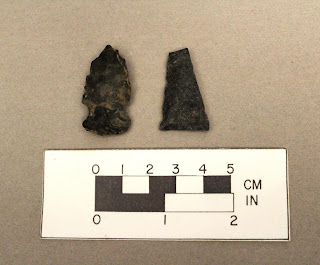 The Beaver Run site (36Mo83) produced 251 prehistoric artifacts. As with Strawberry Ridge, the majority of these artifacts were made from Shriver chert but a few jasper and metarhyolite pieces were also recovered. This site did not produce any concentrations of artifacts, tool types or debitage. Analysis indicates that this site was repeatedly used for brief periods of time for resource procurement activities. The only projectile points recovered were two broadspears, one in jasper and the other from metarhyolite. The jasper piece appears to be of the Perkiomen point type. This may represent a single component site but more than likely the occupations cover multiple time periods. The activities at this site also seem to focus on the exploitation of the adjacent wet land. 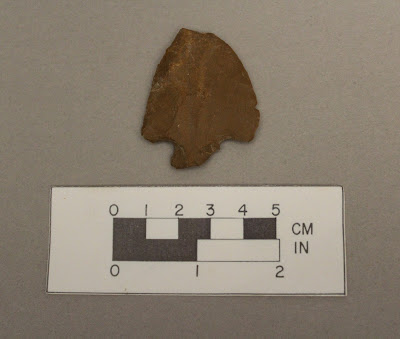 These sites represent a poorly documented component of the Archaic adaptation in the Ridge and Valley Province of northern Pennsylvania. The generally accepted Middle and Late Archaic settlement pattern models focus on riverine resources and involve seasonal movements to procure food resources. Many large floodplain sites from this time period have been excavated. However, we know that many Archaic period sites are located in non-riverine or upland settings such as the two sites documented in this survey. Unfortunately, because these sites are not “sexy” (they typically have a low artifact density with few features) they are rarely investigated. Changes in the distribution of archaeological sites by time period reflect how Native Americans changed the way they exploited the environment i.e. their adaptive strategy. Based on other surveys, we know a lot about how native peoples exploited floodplain environments but not upland environments. Significant changes in technology, and subsistence were occurring during the Late Archaic, Transitional and Early Woodland periods. This time begins with a foraging subsistence system and ends with one that included the development and domestication of certain plants. However, the process is not well understood, partially because we are only looking at a small segment of the settlement pattern and the native’s adaptive strategy. An increase in the number of upland sites that were investigated would reveal more detailed changes in the settlement pattern and cultural adaptation during this critical time.
The final recommendation of the author of this report was that these sites were eligible for listing in the National Register of Historic Places for the information they contributed to our understanding of changing adaptations. In addition, she strongly recommends the intensive investigation of additional upland sites as they become known to archaeologists. 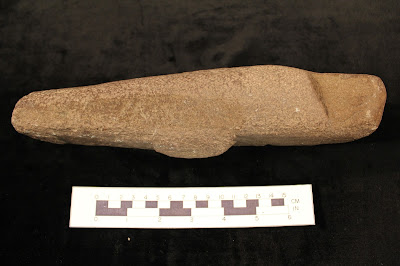 Finally, Montour County is named after Madame Montour.  She was a legendary diplomat of the frontier and an important interpreter between Indian, French and English colonists. Many believe that Madam Montour was significant in contributing to the “long peace” (1675-1754) in Pennsylvania. Research conducted by Dr. Mary Ann Levine in association with her excavations at Otstonwakin , the village home in Lycoming County of Madam Montour, have provided additional evidence of this fascinating woman.
Andrew Montour (c 1720-1772), son of Madame Montour ,was prominent in Indian affairs on the Pennsylvania frontier between 1742 and 1772. He is first mentioned by Count Zinzendorf who hired him as a guide and interpreter in 1742. In a vivid description he reports the following: “This man had a countenance like another European but around his whole face an Indianish broad ring of bear fat and paint, and had on a sky-colored coat of fine cloth, black cordovan neckband with silver bugles, a red damask lapelled waistcoat, breeches over which his shirt hung, shoes and stockings, a hat, and both ears braided with brass and other wire like a handle on a basket” (Wallace 1999:178). He spoke several languages – French, English, Delaware, Shawnee and at least one Iroquoian dialect. Andrew probably inherited his gift for languages from his mother, Madame Montour.  Andrew fought with General Braddock at the Monongahela and with George Washington at Fort Necessity. His influence among the Ohio Indians was so great that the French offered a reward for his capture. For his contributions as a soldier and diplomat, he was awarded lands in Montour, Perry and Allegheny counties by the Commonwealth. Unfortunately, Andrew was killed at his home near Fort Pitt in 1772 by a Seneca Indian who he had been entertaining for several days.

We hope you have enjoyed this journey through the archaeological heritage of Montour County and you will seek additional reading at the links provided above or through the publications listed in the bibliography.  Understanding and exploring our archaeological heritage is pivotal to our understanding of human behavior and our ability to change and adapt over time- just as the peoples of Montour County have done for thousands of years.

For more information, visit PAarchaeology.state.pa.us or the Hall of Anthropology and Archaeology at The State Museum of Pennsylvania .
Posted by PA Archaeology at 4:16 PM

Email ThisBlogThis!Share to TwitterShare to FacebookShare to Pinterest
Labels: Montour