Huntingdon County is the Home of Rockshelters and Iron Furnaces 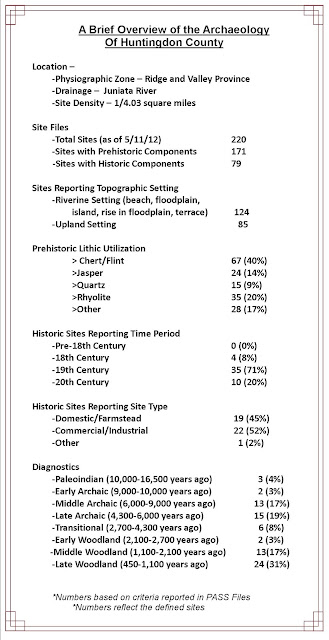 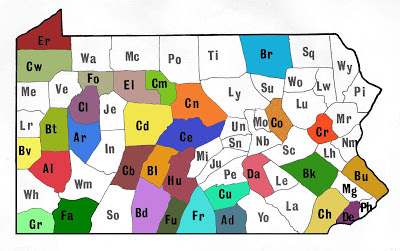 This week, our travels through the archaeology of Pennsylvania take us to Huntingdon County located in the south-central region of the state. This county is situated in the Ridge and Valley section of the Juniata drainage basin. The region is characterized by a series of ridges separated by valleys oriented north-south.  Site density for the county is relatively low (1 site per 4.03 square miles) and only 220 sites have been recorded. The main waterways are the Juniata River, the Raystown Branch of the Juniata, Aughwick Creek and Standing Stone Creek. The floodplains of these waters represent attractive locations for historic and prehistoric people and 62% of the sites are located in riverine settings.

Lithic resources for making stone tools are common. Local chert is the most common material used followed by metarhyolite and jasper. The jasper probably originates from the Bald Eagle quarries near State College and the Standing Stone Creek Valley probably served as an avenue for transporting this material. The metarhyolite originates in the Catocktin formation in South Mountain and the Aughwick Creek Valley would have served as the transportation route. Paul Raber, archaeologist at Heberling and Associates, was able to identify a number of trailside camps used during the transport of metarhyolite over long distances. These types of sites begin to appear during the Early Archaic period and continue through the Late Woodland. Because the use of these sites covers a long time period, Raber argues that the use of the metarhyolite quarries is part of a long standing tradition among Native Americans and that this was an open resource, available to all groups.

The most spectacular site excavated in the Huntingdon County was the Sheep Rock Shelter (36Hu1) located along the Raystown Branch near its confluence with the Juniata River.  A rock shelter is a rock overhang that provides protection from wind and precipitation.  These natural shelters were very commonly used in prehistoric times and have been termed prehistoric motels.  They may not always be located in areas containing food resources, but they are a safe haven from  a storm.  Discovered in 1958 by John E. Miller, the Sheep Rock Shelter consists of a large rock face 70 feet high with a slight east-facing slope that protected an area of about thirty feet wide and fifteen feet deep.

The sediments under the rock face were more than twelve feet deep and document the evolution of Archaic and Woodland cultures in the region. Because the rock face protected the site from rain, the artifacts left behind by these people remained dry for thousands of years, resulting in the preservation of a variety of organic materials.

In 1962, John Guilday analyzed over 35,000 animal bones excavated from the shelter. In addition, a large portion of a bark basket, sandals, cordage, bone, antler, and wooden tools were recovered in the early 1960s prior to the site being flooded by construction of the Raystown Dam. These artifacts document the sophistication and complexity of Native American technology and diet rarely found at open-air sites. Unfortunately, the stratigraphy of this site was incredibly complex and it is difficult to assign specific artifacts to specific time periods.  The site is currently covered by 125 feet of water. 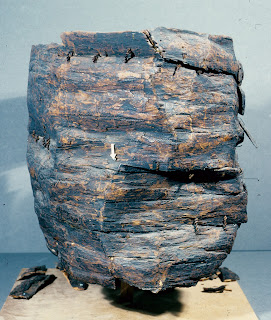 The Mykut Rockshelter (36Hu143) was excavated as part of a Penn DOT road improvement project and produced artifacts dating from Archaic through Late Woodland times. It is situated in a gap on Terrace Mountain connecting Little Valley with the Raystown Valley. As a rockshelter, it was already an attractive camp site but situated on a path between two valleys made it an even more advantageous camp site. It was first used during late Middle Archaic times as a deer hunting and hide processing camp. The artifacts represent the finishing and re-sharpening of projectile points and other tools in preparation for hunting and the final processing of the meat. Broadspears, so frequently found in riverine setting were also recovered from the Mykut Rockshelter demonstrating that Transitional period people were also exploiting upland environments. The rockshelter continued as a hunting camp through the Woodland period. The Late Woodland saw the most frequent use of the shelter. Raber believes this results from the increased movement and communication of Late Woodland peoples using upland paths between villages.

The Juniata Valley was the center of the iron industry during the first half of the 19th century and Huntingdon County contains the remains of numerous iron furnaces. They first appear just after the Revolutionary War but increase significantly in number during the War of 1812. Built in the 1820’s and early 1830’s, the Cromwell Grist Mill (36Hu179), the Winchester Furnace (36Hu82) and the Rockhill Furnace (36Hu130) were investigated as part of the Route 522 Improvements project. They are located near Orbisonia along Blacklog Creek. They all used the same mill race as a source of energy - the grist mill to grind grain and the furnaces to operate the giant bellows to increase the heat in the furnace. The excavation of the two iron furnaces represents the most extensive excavations of any such sites in the Juniata Valley. The main parts of each site were extensively sampled and this work represents a wonderful sample of iron furnace archaeology. As noted by Paul Raber “the two furnaces also are significant within the context of nineteenth century Pennsylvania iron industry, for they are representative of the scores of charcoal ironworks that made the Juniata Valley of central Pennsylvania the leading producer of iron in the United States for the first half of the nineteenth century.” 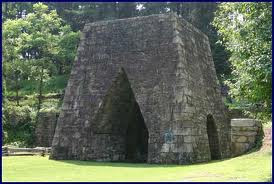 Greenwood furnace was the focus of a field investigation by Paul Heberling at Juniata College between 1976 and 1987. This work included excavation of the wheel pit and headrace, the bellows/tub room and the boiler house. The associated workers village was also investigated. The site has been partially reconstructed and is now a state park. We encourage you to visit this site to gain a better appreciation of life at an iron furnace. As noted in Paul Heberling’s report, after 11 years of excavation, “in all that area, we never found a privy. That conjures up some startling possibilities for contemplation”.

We hope you have enjoyed this short overview of Huntingdon County and that this will inspire an interest in recording and preserving the archaeological sites in your community.  These resources are Pennsylvania’s heritage and for all of us it is our window into the past.  Help us to protect and preserve these archaeological resources which are crucial to our understanding of the past.

Raber, Paul
1995    Prehistoric Settlement and Resource Use in the Aughwick Creek Valley and Adjoining Areas of Central Pennsylvania. Pennsylvania Archaeologist 65:1-19

For more information, visit PAarchaeology.state.pa.us or the Hall of Anthropology and Archaeology at The State Museum of Pennsylvania .
Posted by PA Archaeology at 4:28 PM