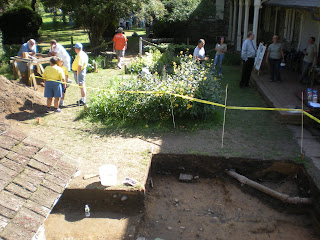 As this year’s excavation draws to a close, Fort Hunter retains its secrets and many questions remain unanswered. Addmittedly, this year has been frustrating. As in years past, fort period artifacts were recovered but no structural evidence was found that can be definitively attributed to the fort.

Our excavations in the main block revealed that the ice house foundation cuts into the well feature, suggesting an earlier date of construction, however the exact dates of these structures continue to be unknown.

Feature #24, a large shaft, was found in the unit directly west of the well structure. The four foot wide shaft feature contained an iron pipe running to or from the well at a depth of 6 ½ feet from the surface and appears to be a later modification to the well. The function of the iron pipe at this point is speculative. 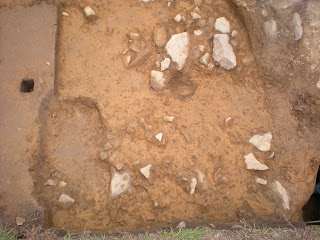 The prehistoric levels produced material in the form of a relatively dense FCR (fire cracked rock) cluster along with several dozen ceramic sherds. After washing and cataloging the collection in the lab, refits of both the ceramics and FCR seem to be likely. We are hoping to be able to reconstruct a portion of a large Middle Woodland pot.

In the exploratory trench in the front yard, a section of thickened A horizon was encountered. Probing north and south of the trench indicated the unidentified feature was approximately 15 feet wide and had an average depth of 15 to 28 inches. Artifacts contained within were a hodgepodge including ferrous metal objects, a glass wine bottle fragment and a Lamoka projectile point. This feature still holds the possibility of relating to the fort occupation.

Next year should see the in depth investigation of the well structure at the center of our main excavation block and continued exploratory trenching elsewhere on the property in search of the stockade.
While not all of our research goals were met this season, it remains a success in large part due to the time and effort of all our volunteers, and to the thousands visitors and hundreds students that participated the public archaeology program at Fort Hunter Park as part of the celebration of Archaeology Month in Pennsylvania.
For more information, visit PAarchaeology.state.pa.us or the Hall of Anthropology and Archaeology at The State Museum of Pennsylvania .
Posted by PA Archaeology at 2:33 PM