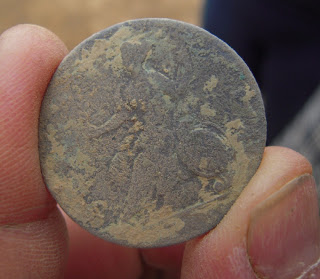 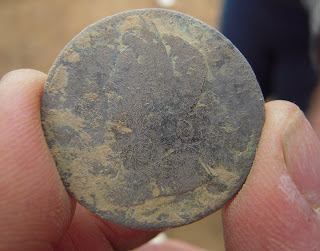 On Wednesday, Museum staff joined the hunt for Fort Morris in Shippensburg, PA.

Excavations have previously uncovered ceramics, musket balls and gun parts and flints dating to the Mid-Eighteenth Century. The first coin was found this week. It is copper half-penny in relatively poor condition. However, the left facing figure with a laurel wreath crown (King George II) on one side of the coin and the outline of Lady Columbia on the other side, indicate that it is probably a King George II half-penny. These coins were produced from 1727-1763, three years after the King’s death, yet the last printed date on coins themselves was frozen at 1754.

Fort Morris was one of many military posts commissioned during the French and Indian War to protect the British colonial western frontier. Historical documents tell us that Col. James Byrd directed the fort’s construction in 1755 and that it was maintained as a military post through 1764. It is possible that early settlers in the Shippensburg area squatted in the Fort’s interior buildings after this time.
But by the late 1800s, it is believed that all documented structural remnants of the original Fort—its fortifications consisting of a stockade wall with four corner bastions, its associated buildings, and water well—had been abandoned and removed. The land was farmed and eventually reclaimed as a residential plot by the growing borough. Subsequently, the exact location of the Fort became obscured and confused in local lore and history. 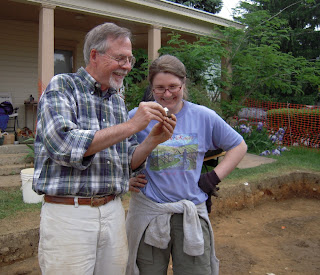 Stephen Warfel, former Senior Curator of The State Museum is conducting his second field season on the most likely of three locations speculated to be the original site of Fort Morris.

Last year, Warfel’s crew of local volunteers and Shippensburg University students tested this location with the permission and invaluable assistance of the landowner. They recovered numerous Fort Period artifacts and evidence of sub-surface features that could be portions of fortification or building trenches associated with the Fort. 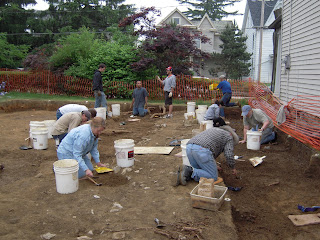 This year, the crew is opening a large block excavation to further investigate these features. They hope that when larger areas are exposed, the outlines of these pits and trenches will match a historic drawing of Fort Morris found in the archives of the British Library. They also continue to collect associated artifacts that will either collaborate or disprove the use of this location as a French and Indian War Period military site. Until then, the hunt for Fort Morris continues…